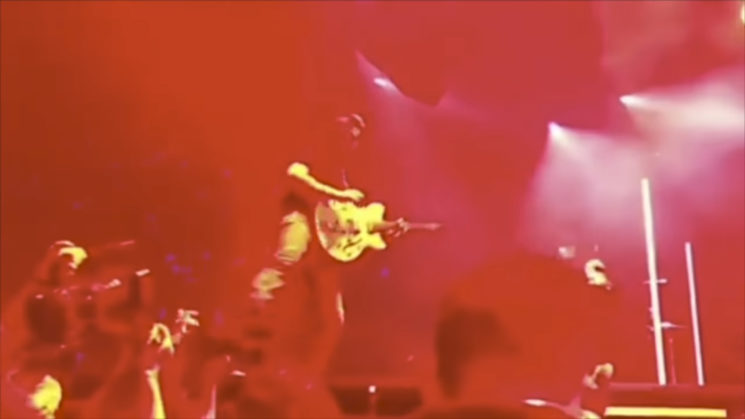 At KROQ Acoustic Christmas on Saturday, a video shows Queens of the Stone Age frontman, Josh Homme, violently kick toward a female photographer’s head during his performance. Like any professional, Chelsea Lauren, a photographer for Shutterstock, composed herself and carried on to shoot the headline act that came on next. Then she spent the rest of the evening in the ER.

Chelsea says that the incident was unprovoked and that Homme even smiled at her before he lashed out. She said “It was obviously very intentional”, reports Variety.

In the video, Homme can be seen walking past her, then turning around to kick her camera away on the way back. Later, recounting the incident, she tells Variety…

He looked straight at me, swung his leg back pretty hard and full-blown kicked me in the face. He continued performing.

The backlash on the band’s Instagram was pretty harsh, including from some of the band’s fans. 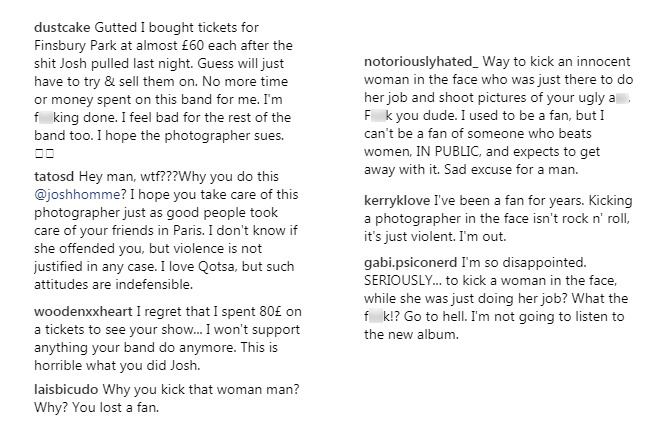 Shortly after the incident, Homme reportedly took out a knife and deliberately cut his own forehead, dripping in blood for the rest of the performance. It’s been speculated, although unknown, that Homme might have been under the influence of drugs or alcohol. At various other points throughout the show he insulted the sold-out audience, as well as the headlining act, Muse.

“I was a total dick” says Homme ruring the video, and apologises to Chealsea several times. He also posted a second video apologising again to Chelsea, as well as others in his life who are embarrassed by his actions.

If drink or drugs were involved in the incident, then it does sound like he’s on the way to admitting that he has a problem. And that he wants to do something about it.

I want to be a good man, but I think last night I definitely failed at that.

I’m gonna have to figure out some stuff, I think. Because Rock and Roll’s a wonderful thing. It’s supposed to save and help people, not mess them up.

While I do think the apology is genuine, it doesn’t absolve him of his actions. It was most definitely a shitty thing to do, and should never have happened. Just because somebody is a big flashy star (who I’d never actually heard of until I found out about this incident), it doesn’t give them the right to physically abuse people. Especially people who are just trying to do their job.

As one person on Instagram commented, “Kicking a photographer in the face isn’t rock n’ roll, it’s just violence”.

Hopefully, the matter will be settled in a way in which Chelsea feels comfortable, and I hope that Josh gets the help he so obviously needs.