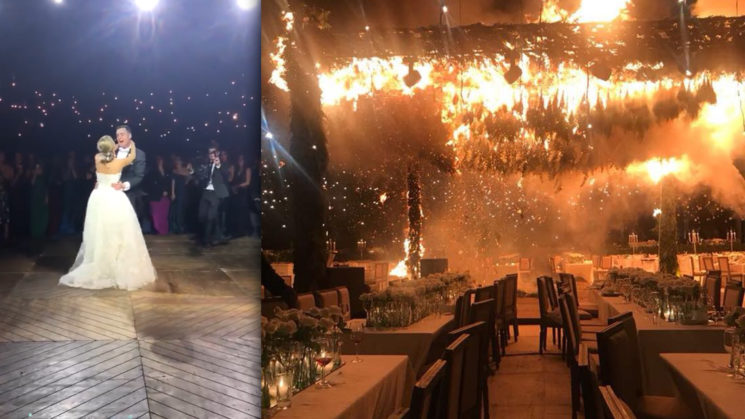 Some couples want a nice low key wedding. Others, however, want it to be somewhat extravagant. But sometimes that extravagance comes at a cost. In the case of one couple, pyrotechnics during the happy couple’s first dance caused the venue to go up in flames. It starts off as many first dances do. The happy couple is happily dancing away with friends looking on, cheering.

But then the cheers turn to screams as they notice the decorations above have caught fire. And it all goes downhill from there, really. The whole thing was shared to Facebook, where it’s already received a few comments criticising the venue for not having fire extinguishers handy.

At first, I thought it was just shot inside a dimly lit indoor venue, but later videos of the fire spreading show that it appears to be an outdoor affair. So, it’s likely that all of the guests managed to survive unscathed.

It’s not the way that most people would want to remember their wedding day. But at least it will be one most of the guests won’t forget in a hurry.

I always find it odd in events like these that, although there is obviously a professional video guy there (you can see him walking around with his gimbal), the only video we ever see from events like this is from phones. Where are those epic slow-motion shots of flames licking through the air while the guests all flee in horror?

Perhaps they should’ve played Metallica for their first dance. That might’ve been more fitting.

« Is personal editing style as important as photographic style?
GoPro cuts prices by $50-$100 by creating a “trade-in” program for any digital camera »