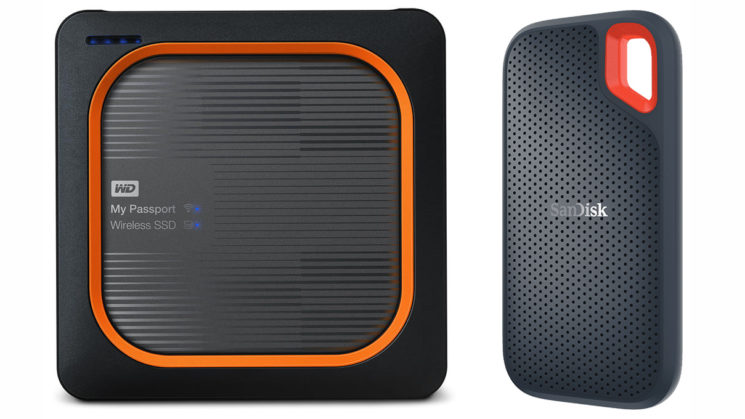 When Western Digital announced the My Passport Wireless Pro in 2016, it was a nice little improvement over the original. But it still wasn’t quite what people were hoping for. It was still a very handy unit, it was still a little slow and underwhelming. Now, though, its latest iteration, the My Passport Wireless SSD takes things to a whole new level. As well as the obvious addition of the SSD, the Wi-Fi’s been upgraded, as has the built-in SD card reader.

And next up is a new SanDisk Extreme Portable SSD. I knew Western Digital buying up SanDisk would lead to great things. The new Extreme SSD offers the speed and performance you’d expect from an external solid state drive, but with a ton of durability.

It offers built in 802.11acn wireless with the ability to access the content directly over Wi-Fi, including 4K streaming to a computer or mobile device. It also has some third party integration with some apps, including Filmic Pro. For mobile shooters, it will be very handy to have the ability to record video straight to the hard drive, seemingly bypassing your phone’s internal storage as the product web page suggests.

Inside the unit is a 6700mAh battery, which should last for up to about 10 hours use. It also doubles up s a power bank for charging other USB device. Very handy for those drone pilots. Hard drive transfer speeds over USB3.0 run up to 390MB/sec, and SD cards can transfer directly to the SSD without the need for a computer at up to 65MB/sec. A drastic improvement over the Wirelesss Pro.

Orders are expected to ship mid-February.

As a USB3.1 Gen 2 Type-C drive, this unit has crazy fast transfer speeds with up to 550MB/sec read for working out in the field. It’s available in capacities from 250GB up to 1TB. As one would expect, it’s compatible with either Windows or Mac. And although the drive is Type-C, you can still use it with USB2.0 Type A sockets. You just need a different cable.

The SanDisk Extreme Portable SSD is available in 250GB, 500GB, and 1TB flavours for $99, $169.99 and $349.99 respectively. The are currently listed on the SanDisk website as “not in stock”, and there doesn’t seem to be any word on an actual release date yet.

They both look very cool, and I really want one of those My Passport Wireless Pro drives. But, at that price, I think I’ll pass for now. It sure would be easier than carrying around a Windows tablet and two USB hard drives on every shoot, though.

« Sony a9 vs, Canon 5D Mark 1V: Looks like Sony is improving on skin tones
Google unveils a pair of 3D 180° point & shoot VR cameras by YI and Lenovo »