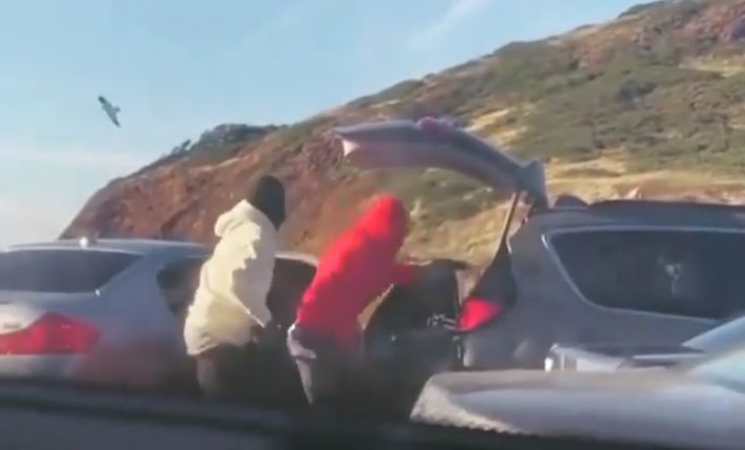 A Canadian film crew was recently robbed at a gunpoint in San Francisco’s Twin Peaks parking lot. Two men attacked them from a car, and it’s estimated that they took the gear worth $35,000.

Since Twin Peaks is a popular spot, there was another group of people in the car behind. They filmed the entire incident, where you can see one of the victims getting pistol-whipped and the other held at a gunpoint.

The robbery took place on Friday evening, as NBC Bay Area reports. The police confirmed that they were called around 6:15, but they said that they were still investigating. Sadly, the thieves took everything: not just $35,000 worth of gear, but also the footage that the crew had filmed at the famous tourist destination.

Director and cinematographer James Saint Surin shared the video on his Instagram. It shows two armed and masked men hitting one of the crew members and grabbing all the gear from the trunk before taking off. You can hear that the people in another care are scared to death, and how could they not be? Still, they filmed the entire incident (including the thieves’ car and license plates), so it will hopefully be of help to the police.

Take a look at the video, but mind the strong language and keep in mind that it’s not for the faint-hearted.

Sadly, this isn’t the first case of camera theft in San Francisco. While Twin peaks is a popular spot, it’s become notorious for anyone carrying camera gear. It’s been home to so many smash-and-grabs that KPIX 5 came to investigate. And believe it or not – the reporter got robbed while filming the story. Last year, another photographer was followed home and robbed after shooting the Golden Gate Bridge. And this January, Photographer Ken Mendoza was robbed in the middle of a wedding couple shoot.

For now, there is no information on who robbed the Canadian camera crew nor was the gear found yet. But do pay attention to suspiciously cheap gear in online stores like eBay. Since the investigation is still ongoing, the police are asking anyone to call their department at 415-574-444 or text them at “TIP411” if they have any information about the robbery.