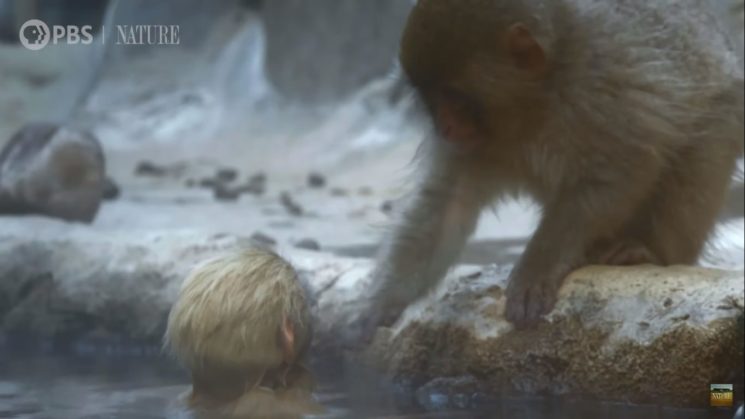 PBS series Spy in the Wild 2 has shown us some interesting and hilarious clips so far. For this show, PBS has built a whole lot of different spy cameras, all of which show us the animal lives up close and personal. And this time, a spy camera disguised as a macaque caught the attention of a real baby macaque who wanted to be its friend. It’s heartwarming and funny at the same time.

As the macaques relax in the mountainous hot springs in Japan, the “Terminator macaque” observes them and does its job of recording. None of the animals seem too interested in the spy camera, but the baby macaque seemed to quite like it. When the camera catches its attention, the baby tries to reach out for it and play. But then the mom steps in, dragging its child away from the weird-looking new friend. It’s pretty hilarious because it looks so much like something a worried human mom would do if she doesn’t like your new weird friend.

As I mentioned, PBS has created quite a few of these spy cameras. One of them caught singing and farting gorillas, which I also found very funny to watch. Another was shaped like a tiny hummingbird and it showed us a giant swarm of monarch butterflies from within. I’m curious to see what they will come up with next and if there will be any more unexpected friendships between cameras and its subjects.