It’s funny how commercials have a way of completely escaping your memory, and then seem to resurface again every few years. This is one of them. Directed by Trevor Clarence, this 2009 ad for South African franchise of the restaurant chain Wimpy illustrates just how careful you need to be as a microphone boom operator, especially around delicate sets.

The commercial sees the film crew visiting a Mug Collector, who starts to walk us through the collection he’s been building up for 35 years. Suddenly, the microphone on the end of the boom pole gets caught up in the overhead fan and swung around the room, knocking all the mugs off the shelves. 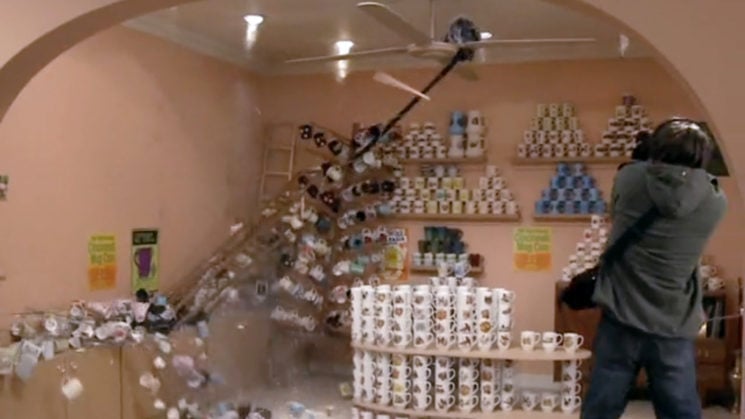 The commercial was to promote a Wimpy mug giveaway across the South African franchise. It’s a promotion they seem to run annually, with a different theme each year. And while in this case, the commercial was pure fantasy and pretty funny, this kind of thing definitely does happen in the real world, too. And it’s not so amusing when it does.

In March 2017, a man smashed an expensive pumpkin sculpture after losing his orientation shooting a selfie in an infinity mirror room and stepped on one. In July of the same year, a woman destroyed $200,000 worth of art when shooting a selfie at an installation where pieces were mounted on pillars. She bumped one which created a domino effect, knocking over a bunch more.