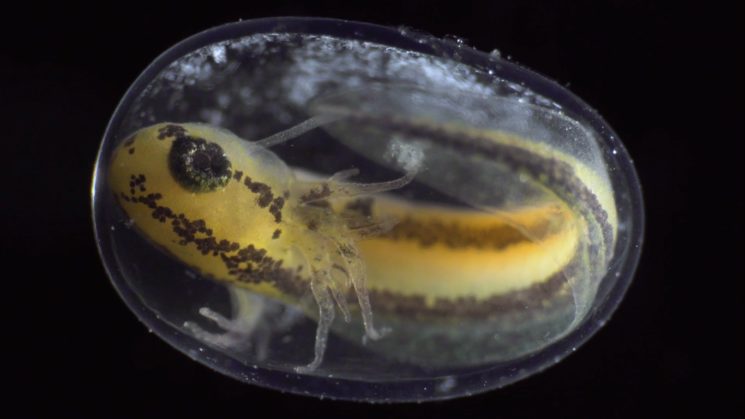 The development of a new organism from a cell is a fascinating process. Dutch filmmaker and photographer Jan van IJken has recently put this miracle of life in a stunning timelapse. His short film BECOMING shows a newt forming, from a single cell to birth, in only six minutes.

As a photographer, Jan leans towards using natural light and pays a lot of attention to composition and detail. He explains that he has lately become interested in human-animal relationships, nature, and microscopy. Thus, he experimented with microscopic photography for his latest video. BECOMING shows the formation of a newt (salamander) in its transparent egg in great microscopic detail. A single cell dividing into two, four, eight… from fertilization to hatching, this video shows the entire process in only six minutes. Near the end, you can even see its running bloodstream.

Jan explains that he followed the salamander embryo very closely in a combination of timelapse and film.

All stages of embryogenesis can be seen in this film: cleavage, gastrulation, neurulation and organogenesis. Time was condensed from about 3 weeks to 6 minutes.

While I was watching this, I was focused and tense as if I were watching an action film. It’s hard to explain, but it kinda made me wonder what’s gonna happen next. And I really enjoyed it. So far, BECOMING has been screened at more than 20 international film festivals and it has received the Award for best short documentary at the Innsbruck nature film festival 2018.

Make sure to watch the entire video, and don’t forget to check out more of Jan’s work on his website and Vimeo.