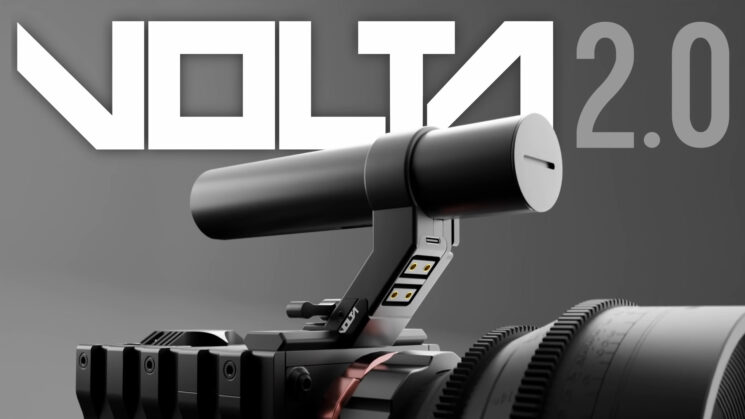 If you’ve been a visitor here for a while, you might remember Volta. They released the first version of their top-handle power bank in November 2019, but it wasn’t perfect. The idea was great. Pop a couple of batteries inside the handle, and it feeds power out to your camera. It was cool but basic, and it wasn’t quite perfect.

Well, now they’re back, with Volta 2.0, currently running on Indiegogo, which includes an evolved top handle and a system that seems to have had a complete redesign, making it much more versatile. It comes with a rather cool new charging “SnapCharger” station that doubles up as a V-Mount battery. It’s also stackable, letting you charge up to 8 batteries at once.

First, let’s take a look at the new handle. The old design was fairly basic and fixed, with slots for a couple of swappable 18650 batteries. It had a confusing Type-C USB socket that put out 7.4v (not the standard 5v) to be able to power your camera. With the new design, is somewhat more modular. The handle itself is removable from the bracket that attaches to your camera and can be slid forward and backwards to provide you with the most comfortable grip of your camera. And due to its 15mm diameter, you can attach other holders and accessories to it.

You’ll also notice in the animation above that as well as the Type-C USB socket (and this one actually puts out the standard 5v) there are also a pair of 7.2v D-Tap sockets below it. This means you can power your camera and a couple of other devices, too, like a field monitor or LED panel. Of course, this does mean your battery will drain faster.

And here’s where we see another big change. Instead of user-replaceable 18650 batteries, the new Volta 2.0 uses the new 21700 cells, designed by Tesla to provide a longer range and lifespan for their vehicles. They’re not user-replaceable, anymore, though. They’re contained within the cylindrical portion of the handle. 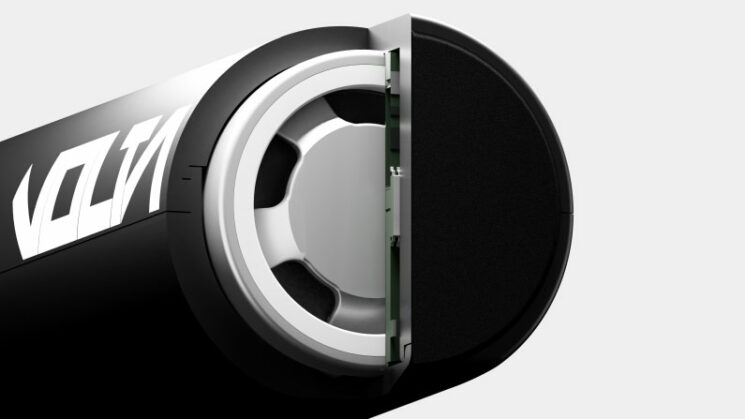 But thanks to the new SnapCharger, you’re able to charge them two at a time over USB-PD in as little as two hours. What’s more, you can stack and chain four SnapChargers to charge up to 8 Volta batteries simultaneously. Yes, over a single Type-C USB cable using USB-PD. Volta says they attach and connect to each other magnetically and then intelligently split the power between them.

The new SnapCharger also doubles up as a 72Wh 14v V-Mount battery when you’ve got two Volta 36 battery units inside them, allowing you to use Volta to power… well, anything that uses a V-Mount battery, which is extremely handy, especially when you can have a bunch of spares in the background being charged up to swap out as necessary.

And like the handle bracket (we’re getting to it), the SnapCharger has both a Type-C 65W USB-PD socket (for charging as well as power output) and also a pair of 7.2v D-Tap batteries. Ok, the top handle (told you) also features a modular attachment system, allowing you to swap out either a cold shoe mount or (wait for it…) a NATO rail attachment (YES!).

For me, the ability to use a NATO rail with a top handle is vital. I use several different camera rigs, each in their own cages, and if I’m not using a NATO rail handle, it means that I have to get an individual handle for each cage. NATO rails means I can quickly swap the handle from one cage to another in a couple of seconds, which is an invaluable timesaver, especially when I want to switch a rig between handheld and slider or gimbal and need to reduce the size and lower the centre of gravity. Or if I just want to swap from one camera rig to another without having to waste time unscrewing and screwing a handle between a couple of cages. 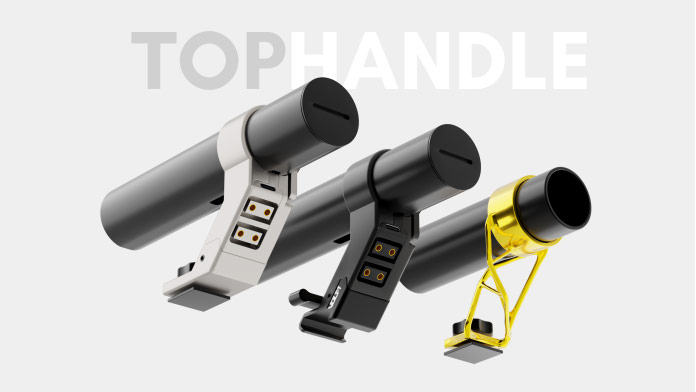 As I mentioned up top, the product is crowdfunding through Indiegogo at the moment and it’s not quite yet reached the working prototype stage, but from a technical standpoint, what the device claims to achieve isn’t really all that difficult in principle. Whether or not Volta can deliver, though, remains to be seen. During their now-apparently-deleted last Indiegogo campaign (I thought those things stayed up forever as a record/archive of past projects?), there were some slightly dubious claims as to the battery’s actual capacity. This time around, they’re not stating what the mAh capacity is at 7.2v just that the 36Wh total is equivalent to a 10,000mAh USB power bank. Still not quite the same as an NP-F970, but in theory, it’s a lot easier to swap out and deal with.

Strangely, despite the fact that you’re supposed to be able to daisy-chain four of the SnapCharger units together to charge 8 batteries in total, the pledge levels available on the campaign don’t offer this configuration. You’ve got the Volta 2.0 handle, which doesn’t actually include a battery – just the 15mm dummy rod (for £80) and then a single Volta SnapCharger containing two batteries (for £70) or a kit containing both the handle and SnapCharger & 2 battery sets together (for £140).

I think not having a complete bundle with the handle, four chargers and 8 batteries is going to put off a lot of people who’d want to get a lot of power at a crowdfunding kind of price, especially with as much as it looks like it’ll increase in cost once Volta 2.0 goes retail – assuming it makes it that far.

Oh, yeah, they also have a single solitary Volta 2.0 bracket (which doesn’t seem to have any power outputs) made from solid 12 karat gold. That one’s £12,000, if you’re interested. To be fair, they do say on the campaign that it’s useless and “no one should buy it” (yes, they put it in bold on the campaign, too). If you’ve got 12 grand burning a hole in your pocket, though…

But if you’re interested in finding out more, head on over to the Indiegogo campaign, but do exercise judgement before you choose to pledge.