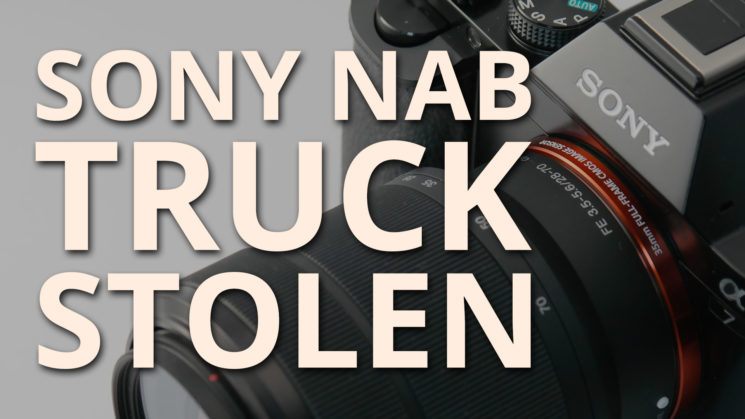 There’s a report coming out of Canon Rumors at the moment that one of Sony’s trucks has been stolen. This truck apparently contains all of the equipment that was destined to appear at the NAB show in Las Vegas taking place next week. CR also report that Sony’s truck contained some equipment from other manufacturers which would be used alongside Sony’s gear at the show.

There’s been no official announcement from Sony themselves, although Sony Alpha Rumors seem to back up the story. They say they’ve received a message stating that the truck has indeed been stolen.

I can confirm the truck was indeed stolen. I’m from a partner company that’s helping scramble in getting replacement supplies. I found out this morning and actually googled to see if there was any news reports online yet. Our products were also on the truck.

And it’s not just shows, either. Only last month, Midwest Photo Exchange had a break in losing hundreds of cameras and lenses. Less than a week before that, lens manufacturer Veydra were broken into and had over 200 lenses stolen. Rental company LensProToGo had around $600K in equipment stolen in 2015, too.

As mentioned, there’s still been no official statement from Sony, yet. But we’ll be sure to update this post when there is.

Update April 18th: Sony Alpha Rumors are reporting an update after receiving a message from an anonymous source.

I work for contracting company. I can confirm that the equipment was stolen. Sony is going to replace it on time. Wont admit publicly to the theft to avoid distraction from new product launch.

So, while the theft still sucks, Sony seem confident that they’ll be able to replace the missing gear in time for NAB. It also confirms that there is indeed a new product to be launched. But NAB isn’t just for photographers, so it may not be the announcement that many may be hoping for.