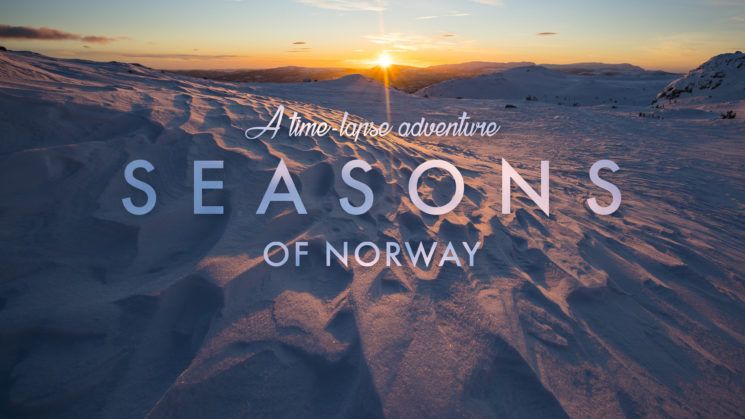 If you enjoy watching time-lapse videos, then you’ve heard of Morten Rustad. After his video “NORWAY – A Time-Lapse Adventure”, he now has a new gorgeous time-lapse video out. “SEASONS of NORWAY – A Time-Lapse Adventure” is recorded in 8K, and it covers 20,000 kilometers of a beautiful country of Norway. It was shot within a course of one year, showing the divine beauty of Norway throughout four seasons.

Norway is a country with fantastic nature, and this is what Morten focused on when creating his latest time-lapse. He wanted to capture the ebb and flow of the four seasons, so it took him one year to shoot the material for this video.

One year is a long time, but it’s only the time he used for shooting. Before that, he had a whole year of planning, and he spent four months editing after he completed the shooting.

The year of shooting was quite an adventure. Morten traveled 20,000 kilometers, took 200,000 photos and filled 20 terabytes worth of hard drives. He has spent months hiking through the mountains and sleeping in tents. I can only imagine what it’s like during a Norwegian winter. He was traveling all across the country hunting for the best locations. Since Norway has so much to offer, he found some secret spots he’d never heard of before. And if you’d like to check out the locations, you can find the map here.

Seasons of Norway puts over two years of preparation, shooting and editing into less than seven minutes of video. But it’s not only about the time. Morten’s latest project took an impressive number of kilometers traveled and photos taken. There was a lot of effort and even more devotion. In the end, I think it definitely paid off for him. The final result is truly incredible!

Morten Rustad is a professional time-lapse photographer based in Oslo, Norway. He graduated from University of Essex in BSc Business Management in 2015, and took a big step into the world of time-lapse photography in 2014. If you would like to see more of his work and find out more about his latest project, check out his website. Also, subscribe to his YouTube channel, like his Facebook page and follow him on Instagram.

[SEASONS of NORWAY – A Time-Lapse Adventure in 8K | Morten Rustad]

« Women’s Work – a project that breaks down professional gender stereotypes
Filmmakers who trampled Grand Prismatic Spring sentenced with $7,500 in fines and 2 get jail time »