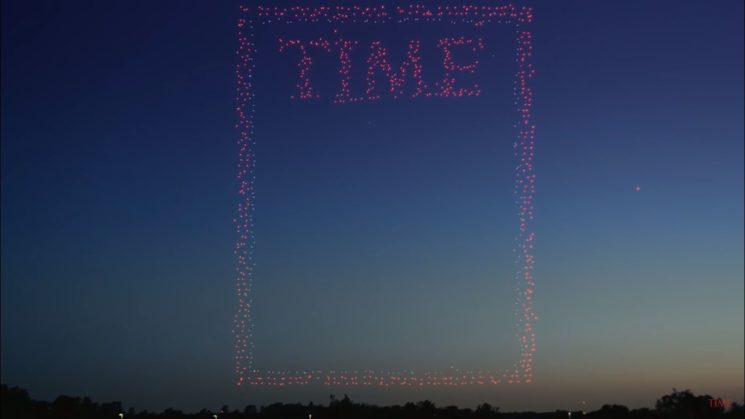 We are all witnesses to the expansion of drones in our culture. The latest issue of TIME is a special report on this topic, and for this purpose, they have created quite an epic cover. 985 illuminated drones were hovering in the sky, forming TIME’s iconic logo and red border. The formation was also captured with a camera drone, and it’s the first TIME cover ever photographed this way.

To create this cover, TIME teamed up with Intel’s Drone Light Show team and Astraeus Aerial Cinema Systems. The drone light show for the magazine cover was 100m tall, but considering the number of drones, they were a bit limited on space. It was challenging to coordinate the drones and avoid the collision, but the project was successful, as you can see from the final result. Intel was in charge of the light show, and Astraeus Aerial Cinema Systems captured the image for TIME magazine.

D.W. Pine, Creative Director of the magazine, explains that they didn’t only want a logo made out of almost a thousand drones. They also wanted to shoot the cover with a camera drone, and this is the first time in 95 years that TIME has done it. So this issue is really all about drones!

TIME has shared a BTS video, so you can take a peek at the launching of the drones and forming of the animation. It looks quite amazing even in the video, and I can only imagine how epic it was for those who were there.

« The GDPR – how bad is it for photographers?
Insta360 debuts a wireless video system for their VR cameras »