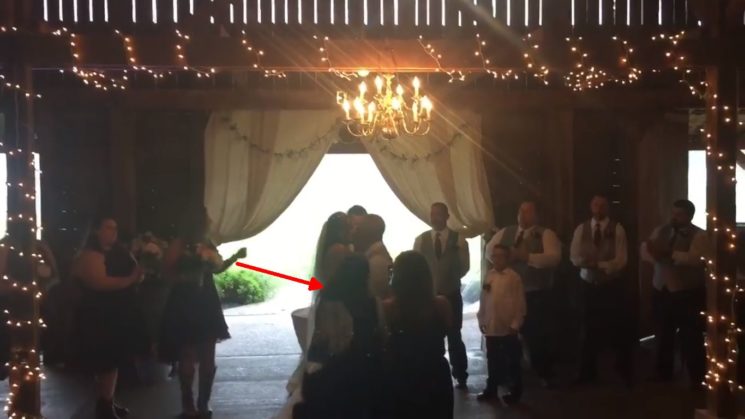 In the era where even your granny has a smartphone, wedding guests often get in the way of paid photographers and ruin their once-in-a-lifetime shots. When this happened to wedding photographer Ashley Easterling, she did what she had to do. She roughly pushed the bride’s stepmom to the side so that she could capture photos of the couple’s first kiss as husband and wife. The moment was caught on video, which quickly went viral and generated lots of comments.

At around 2:50 of the video, you can see the moment when the stepmom casually steps in front of Ashley as the couple share their first kiss. And the badass photographer pushes her to the side and goes on shooting.

The bride, Lorna Dane Grantt, shared the video on her Facebook timeline and it went viral. Ironically, the video was also shot on someone’s smartphone, but at least that someone wasn’t trying to get in the paid photographer’s way.

Now, Ashley pushing the bride’s stepmom may seem too rough on first viewing. But if you think about it just for a moment, maybe it is actually reasonable to do such thing. When you’re a paid photographer trying to capture a once-in-a-lifetime shot, there’s no time to ask someone politely not to stand in your way. You gotta act fast, and this was fast. Professional photographers are paid to get these shots, they know what they’re doing, and they will certainly do it better than a family member with a smartphone (well, most of the time).

Personally, I kinda got triggered by the stepmom casually walking in front of the photographer to get her smartphone shots. I’d probably push her too, as this kind of self-absorbedness and disrespect really pushes my buttons.

I’ve often heard wedding and event photographers complaining about guests with smartphones. They get in the photographers’ way all the time and I can imagine how tiring it is to deal with this over the entire wedding day. Even bridal couples get annoyed by it. First, they paid good money for a photographer and it’s his or her job to get the best possible shots of the event. And second, I believe every bride and groom would prefer to see the smiling faces of their guests, instead of their smartphones.

On the other hand, I understand that guests want to have a few shots of their own, for Instagram or whatever (although in most cases the bride and groom will share the pro wedding photos with them once the photographer delivers them). So, taking a snapshot here and there is fine, but with mindfulness and consideration.

« Tearing down a $2,300 Sony GM lens for a DIY repair
LG V40 Thinq is the first five-camera smartphone on the market »