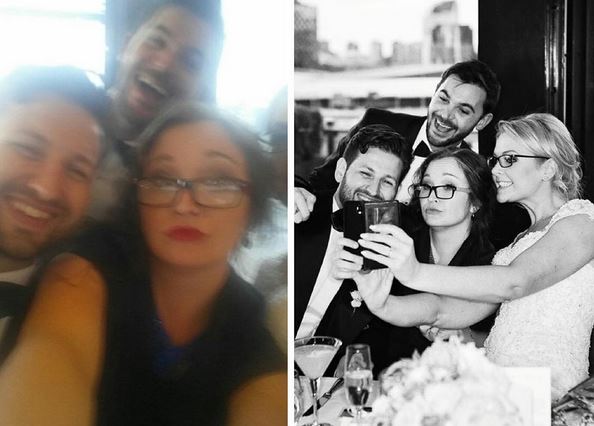 Vogue magazine caused quite a bit of rage among photographers, along with copious amounts of ridicule, when it recently published a list of 10 wedding “rules” to which it recommends brides-to-be say “I don’t”.

The reason for this was the magazine’s statement that couples shouldn’t hire professional wedding photographers, and should rather rely on the guests’ smartphones and disposable cameras.

These next photos, taken by wedding photographer John Warren and a guest, are the perfect answer to Vogue’s nonsense. As the saying goes, a picture’s worth a thousand words.

Stating that all wedding guests have “phones with cameras on them”, and asking “why not scatter some disposable cameras around the party and let your drunken guests go to town?” the magazine claimed that professional photographers will detract from the celebration.

When Stephanie, one of John’s brides, saw the article, she created the comparison below and captioned it “And this is why you hire a professional wedding photographer”.

John told DIYP that “The image was taken at the start of the reception, part of the MC’s hilarious opening was to take a selfie with the couple”. This was so perfectly suited for the Vogue article that I asked him if it was staged, but he said he shot it live and it was not staged.

In fact, John says he hadn’t even seen the selfie image captured by the guest’s smartphone until the Vogue story hit and Stephanie created the comparison and shared it on Instagram.

“It’s a perfect example of why a professional photographer is so important!” John said, agreeing with the comments made by countless others on this matter. “It’s just one of the dumbest articles by a magazine – especially of the calibre of Vogue!” he concluded.

So I think I’ll keep recommending couples hire professionals to capture their weddings, but perhaps Vogue should look into getting drunk readers to send in their smartphone photos for its next issue. After all, all those beautiful, professionally-taken photos in the magazine really detract from the raw essence of what it’s all about.

Have a look at John’s website and Facebook page for many more examples of why you should hire a pro to capture your special day.

« Surfboard racks are a perfect solution for keeping your tripods under control
GoPro Shares At an All-Time Low After Disaster Sales; Will Let Go 7% of Its Staff »