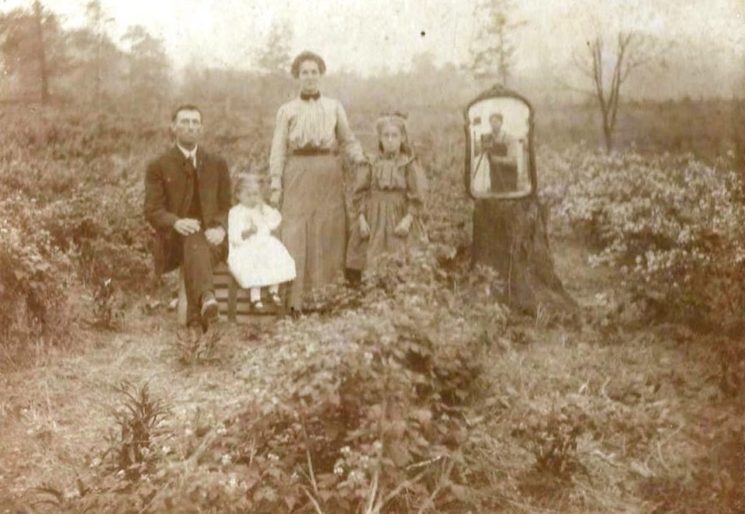 Grab your phone, open the front-facing camera, strike a pose, click, and you’re done. It takes only a few seconds to take the perfect selfie nowadays, but what was it like a century ago? Well, if you wanted to get into the shot, it took a bit more effort than today. And in a photo that recently emerged on Reddit, you can see a creative photographer who figured out a clever way to include himself in the shot.

It’s not clear who took this photo or when exactly it was taken, and the reverse image search didn’t give any results that would answer these questions. All I can say is that it was taken roughly in the first decade of the 20th century, which would be over 100 years ago. And that it shows a clever way of including a photographer into the shot.

While this was one of the ways to include oneself in the photo, we’ve seen a couple of other ones, too. The first “selfie” officially dates back to 1839. It was taken by Robert Cornelius, who produced a daguerreotype of himself sitting outside the family store. Then there’s Joseph Byron with his friends. He took some photos that totally look like today’s selfies back in 1909 and 1920.

There is no information about the photo above and I wonder who is in it: is it the photographer’s family? Also, who may be the person holding up a mirror? And when was this photo taken? So many questions that will probably remain unanswered. But still, it’s definitely interesting to see what an early 20th-century photographer came up with to include himself in the photo.

« How to create a DIY circus setup in your tiny home studio
Flickr starts deleting your photos tomorrow if you are over the 1,000-photo limit »