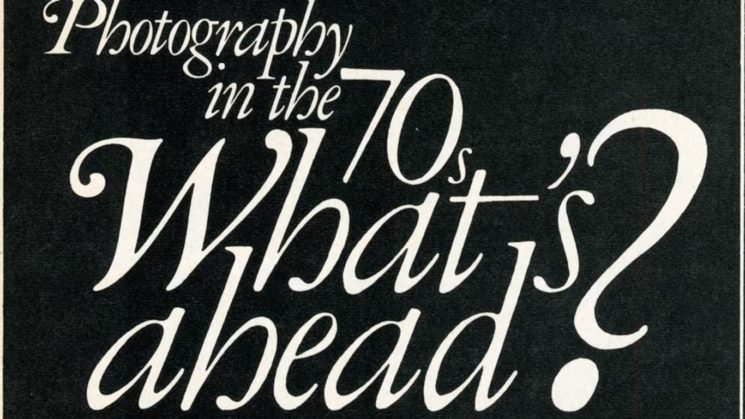 When you were a kid, could you ever have imagined all the camera technology we have today? Azriel Knight stumbled upon an interesting article from 1970. Six photo industry leaders from the 1960s predicted the future of photography and what the 1970s would bring. Did they make correct assumptions? Let’s find out.

Frederic Wilson predicted that “silver is on the way out,” referring to silver that acts as an amplifier when light strikes the emulsion. He believed that it could be replaced by “an electrical conduction surface” which would be coating the film. In a way, he was describing a digital sensor. Not exactly the way we know it today, but this was predicted almost 50 years ago so it’s still pretty interesting.

There are a few more of Wilson’s predictions, but this one really stands out:

“In my mind, it is going to be easier to achieve a picture of good technical quality with less and less knowledge of photography. Camera and film manufacturers look toward electronics- the only way to take a picture.”

While I still think that fancy gear doesn’t make a good photographer, it is true that you can take a photo of good technical quality without much knowledge of photography. With Auto mode on cameras and computational photography applying corrections in real-time, it’s easier than ever to take a decent photo. Although, this is true for 2019, I’m not sure how true it was in the 1970s.

Cornell Capa (the younger brother of Robert Capa) is the next “photo psychic.” He looks more into the social aspect of photography, predicting its increased demand for books, magazines, TV and the like. He also predicted the increased amount of photos that would be taken, fearing that “man’s witness of his own times dies with him.” Once again, this is pretty accurate if you shift these predictions to the 21st century.

Bob Schwalberg predicted that, in the 1970s, photos would be the same as ever. He believed that it would be cameras and lenses that would change, but not much. In a way, this was true for the ‘70s. Although even a small change can be a huge pain in the neck for photographers. Just think about what happens when a manufacturer changes the mount as Canon did in the 1980s.

Nathan Lyons had similar predictions to Cornell Capa. He was more focused on the sociological aspect of photography. He believed that there would be a much bigger audience for photography in the ‘70s, and it seems that he was right.

Arthur Goldsmith had some amazing predictions that weren’t necessarily fulfilled in the 1970s, but a few decades later:

“Giant electron microscopes are being constructed now that will, via the photographic image, enable us to see into the architecture of atoms. Other cameras, orbiting the earth or probing into space, will record new data about the universe and reveal unsuspected cosmic events. Microfilm, linked to computerized retrieval systems, will be indispensable to the archives of the ‘70s, and picture researchers will be able to dial a picture for desk-top delivery through a telephone printer.”

Azriel especially likes predictions of Norman Goldberg because they were very specific. He predicted the increase in ASA and finer grain in film. He also predicted an increased max shutter speed of 1/4000 and a top sync speed of over 1/250, which we have today. He also assumed that self-timers would disappear, but it’s possible that he thought of the separate devices rather than integrated ones. If this is the case, then he was right.

I find it especially interesting that Goldberg predicted the change of Kodak’s film container. Or perhaps Kodak read his predictions and decided to implement the idea, we’ll never know. Goldberg also believed that Polaroid’s 35mm slide process would “generate tremendous interest,” but that one turned out to be “a giant no” as Azriel puts it.

I always find it fun to hear predictions about the times that are now behind us. It kinda reminds me of George Orwell’s 1984, which contains hints of some social phenomena we are experiencing today. As for Azriel’s video and the article he presents, I love seeing how much of photography-related predictions have turned out to be correct. Many of them came to pass, although most of them after the 1970s.

Which of these predictions do you find the most interesting?