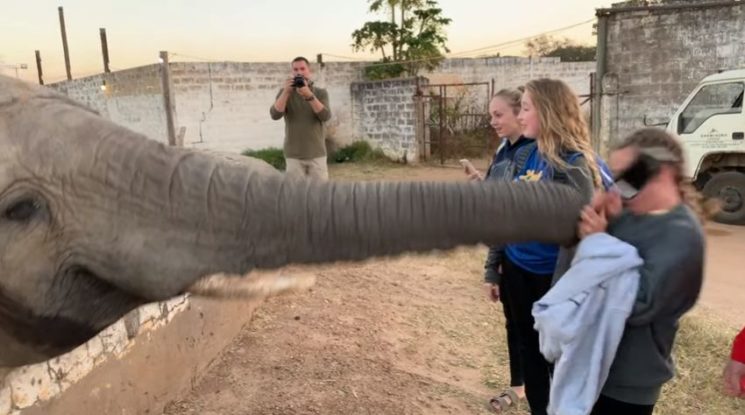 There are animals that seem to love hanging out with photographers and filmmakers. Not all of them are like that though, and this elephant wasn’t afraid to show it. When a girl took her phone out to snap a photo of the beautiful animal, it smacked her and kicked her phone out of her hands. The person who was filming was apparently standing far enough from the elephant, so they managed to capture the incident on camera.

The encounter happened on 13 June 2019, when the girl traveled to Zambia for a 12-day mission trip. After a 20-hour flight and a 10-hour bus ride, the group decided to spend the first day in Zambia relaxing and make it stress-free. So, they stayed near a safari reserve.

There were many activities to do, and just before heading for dinner, the group saw a beautiful elephant perched on the edge of its evening enclosement. “This was a female elephant that has the freedom to roam in its 10,000-acre reserve all day and voluntarily returns each night for a meal and a bath,” the girl told ViralHog. The entire group was standing there, admiring the animal and petting it as it was reaching out to them. At one point, the girl got a bit too close in an attempt to take a photo.

“Next thing I knew, WHAM!! Right in the side stomach. I felt like 10 people had punched me at once as I was catapulted backwards and my phone flew forward to the ground. I abruptly crashed into one of the boys that was on our trip and he stopped my fall, but the “abrupt” feeling of surprise was still there!”

Of course, her group was concerned if she was okay. To be honest, the smack looks quite severe in the video. Fortunately, the girl is fine and as she says, she still loves elephants. “It took me a couple of minutes to fully process the fact that I just got smacked by a real living elephant,” she said. “One of the best parts is that it was all captured on video so everyone, knowing I was okay, could get a good laugh out of it.” I’m glad that she’s fine, and now that I know it, this does look pretty funny, doesn’t it?

[Elephant Knocks Girl Down for Her Phone || ViralHog]