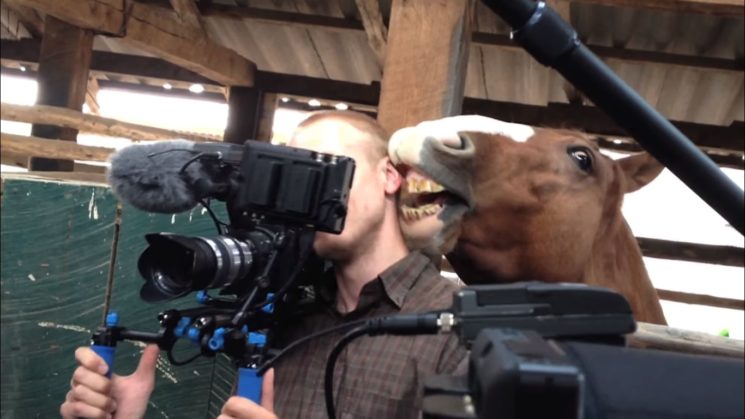 When on set, you need to stay focused and professional in all situations if you want to get the job done right. A cameraman named Greg Harriott raised this to a whole new level. While he was filming an interview with a horse breeder, one of the horses got a little too affectionate and started nibbling on him. However, Greg kept it together and filmed the whole interview. And there’s a video showing was going on behind the scenes, which is sure to put a smile on your face.

The video was published quite a while ago, but the guys over at FStoppers rediscovered it and totally made my morning. As the description reads, Greg Hariott was filming an episode of Born to Explore with Richard Wiese at a ranch near Santiago, Chile. The episode was about Gonzalo Vial, a horse breeder who trains horses with a gentle touch. His horses are very calm and relaxed – and one of them, Chunchun, decided to demonstrate it behind the camera.

Chunchun started nibbling on Greg while he was filming the interview with the breeder. He chewed on his shirt and then switched to his ear. Greg returned the affection for a second, but stayed professional and didn’t stop filming.

This video certainly shows how professional the cameraman is, and my hat’s off to him for that. But also, it’s simply cute and I had so much fun watching it. I watched it at least five times and laughed really hard. So, I hope it will make your day just like it made mine.

[Update, 11 July 2019: the article was edited to include a video by dailymail70, as the original video isn’t available any longer]

[Horse Interview | Born to Explore | Saturdays on ABC via Fstoppers]

« Nikon announces development of lightweight and compact 500mm f/5.6 lens
These seven photography accessories will make your life much easier »