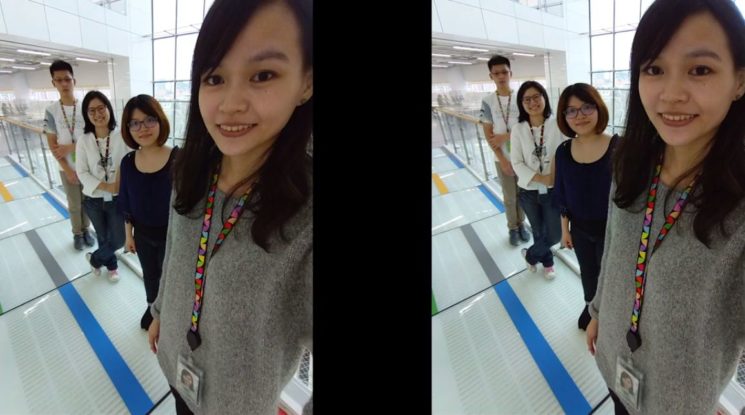 More and more modern phones come with an ultra-wide-angle camera. When it’s a front camera, it lets you capture more people into a group selfie. However, those heads near the edges of the frame will get distorted. A group of researchers has come up with a new method for dealing with this problem. They have created an algorithm that makes your group portraits distortion-free and flattering for everyone in the photo.

If you take group selfies, I’m sure you’ve encountered this problem. Wide-angle cameras don’t only make people want to get a nose job, but they can make their faces look weird and unnaturally stretched. A group of researchers at Google and MIT led by Yi Chang have come up with the new method for fixing these distortions. In a paper titled Distortion-Free Wide-Angle Portraits on Camera Phones, they describe an algorithm they’ve developed to resolve this issue.

Other methods for fixing distortions exist. However, the researchers note that they may undistort faces, but they affect other parts of the image. The method they propose creates a content-aware warping mesh. It locally adapts to the stereographic projection on facial regions, removes the distortion from faces, but it doesn’t mess up the rest of the image.

According to the researchers, the proposed algorithm is fully automatic and operates at an interactive rate on the mobile platform. They demonstrate promising results on cameras from 70° to 120° angle of view. In addition, the algorithm doesn’t only remove distortion from heads that face straight up the camera. It has also proven effective in cases when the faces are turned sideways, or obscured by hats, glasses, and hands.

Check out the video above for more details and more example images. The results seem promising, but it’s not clear when and if we’ll have the software available in our smartphones. But if we do, it will surely be useful for all of us who always stand near the edge of the frame in group selfies. And of course, it could also come in handy for photographers who take wide-angle portraits.

« Texas institutions can use your copyrighted photos for free, court rules
One of Sony’s investors is calling for them to spin off their sensor division »