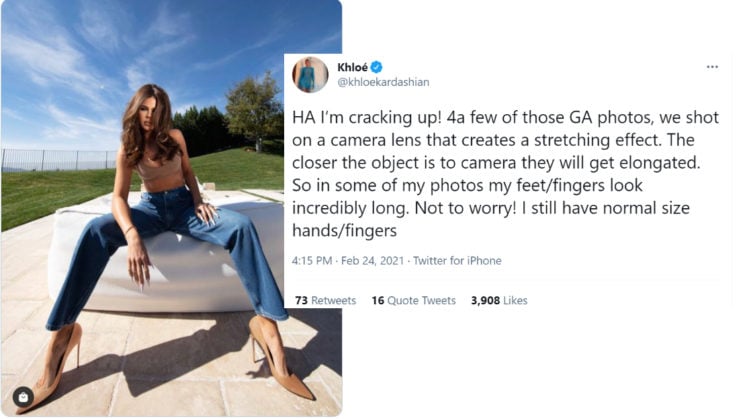 We’ve all seen a bunch of hilarious Photoshop fails (with Vanity Fair adding extra limbs to people probably being my favorite). Khloé Kardashian recently got accused of one because of her huge feet and hands in some photos. But she was unrightfully accused – it was just a wide-angle lens distortion and she tried really hard to explain it to her followers.

Khloé shared some photos to promote Good American, her size-inclusive fashion line. As photographers, you guys will recognize the wide-angle distortion that appears when you photograph someone with it from up close. However, most of Khloé’s fans are not photographers, so they started calling her out.

Most people pointed out to her “freakishly long” fingers and feet, referring to them as “Photoshop fail.” Some folks claimed that her head looks as if it were photoshopped in. Some just pointed out that the photos were “awful,” or called her “Slender Man,” which I must admit made me laugh.

Khloé responded to her followers, explaining that the photographer used “a camera lens that creates a stretching effect.” She published a whole series of tweets to clarify that “the closer the object is to camera they will get elongated.” Khloé Kardashian explaining camera lenses, I must have entered some kind of a parallel universe.

It’s just the lens guys! LOL but some of these stories are really reaching ??

HA I’m cracking up! 4a few of those GA photos, we shot on a camera lens that creates a stretching effect. The closer the object is to camera they will get elongated. So in some of my photos my feet/fingers look incredibly long. Not to worry! I still have normal size hands/fingers

Not to worry! I don’t have freakishly long fingers. It’s the lens! ??‍♀️??‍♀️ I can’t believe I’m even tweeting this LOL my old hands normal sized hands are still in tack. Nope I didn’t get a surgery to stretch my fingers and nope it’s not a “photoshop fail”. Have a great day ? pic.twitter.com/NwVHhPmYLR

Ultimately, Khloé says that she’s happy with photos because a wide-angle lens gives them “a different vibe and not the same old visual” she always sees.

I mean..LOL how could anyone believe this is the size of my feet?! ? it’s The angle and the type of lens. And personally I think this camera lens is so fucking cool. It gives the photo a different vibe and not the same old visual I always see. Either way, I’m happy with them pic.twitter.com/DgAtu70l3W

Indeed, these photos are different from what we normally see in fashion campaigns, which is a plus. Also, they’re not “Photoshop fail,” it’s really just the lens. But on the other hand, I don’t find them good. Just because something is different, that doesn’t mean it’s better (which reminded me of this poster). Of course, that’s just my opinion, and I’d like to hear yours. What do you think of these wide-angle photos?