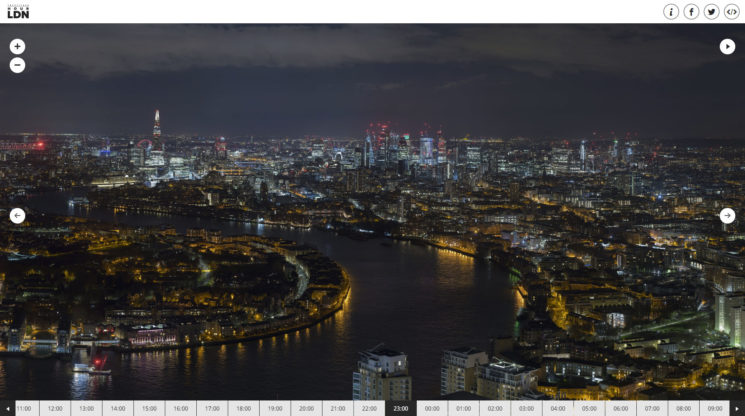 “Gigapixel” and “Timelapse” aren’t phrases one often hears together. Both, individually, require massive amounts of storage to do well. When combined, things start to get a bit ridiculous. It’s been done before, though, at least as early as 2010, when Carnegie Mellon University’s CreateLAB made this.

Now, UK contact lens retailer Lens Store has teamed up with Nikon, Canary Wharf Group and photographer Henry Stuart to produce 24 Hour London, a 7.3 Gigapixel “timelapse” covering a 24 hour period over the city of London. The use of the word timelapse is a bit debatable here, but it’s definitely pretty cool.

TechRadar reports that 6,240 photographs were taken in all, covering a 155-degree field of view over a 24 hour period. That doesn’t actually sound like a whole lot of images considering the size of the final result and the time period it covers. 6,240 images mean that the image for any given slice in time of the day is made from only 260 photos.

When you realise that those photos were taken on the 45MP Nikon D850, though, the maths make a little more sense. The camera was kitted out with a 300mm f/2.8 prime lens. This focal length, combined with the D850’s high resolution means that the images capture such detail that you can even read signs from up to 5 miles away.

While the images do each cover a 24 hour period, it’s not really a timelapse. They’re more slices in time at one-hour intervals. They’re not played back at a fast framerate, automatically transitioning between one and the next every few seconds.

To keep consistency, a motion controlled pan tilt head was used. Each of the different shots for each time of day was then stitched together in post. This allowed for repeatable movements to ensure that every pixel in each stitched image was exactly where it had been in each of the previous shots.

Lens Store also posted an animated gif of the 24 hour period, which transitions through at a slightly quicker pace.

See London like never before! We've put together a 7.3 BILLION pixel photo of the skyline from the second tallest building in the city. It's interactive, so you can zoom in to places miles away! View it here: https://www.lenstore.co.uk/vc/24-hour-london/

The final result is very interesting and lets us explore London in quite some detail. It’s also pretty cool to see how the sun moving through the sky and the lights turning on and off can completely change the look and feel of the same view.

With the pace at which technology is advancing, such things are a lot easier to do than they were back in 2010. But they’re still, by no means, simple. As time marches on, though, I hope that we’ll start to see more of these as the technology becomes more accessible and user-friendly.