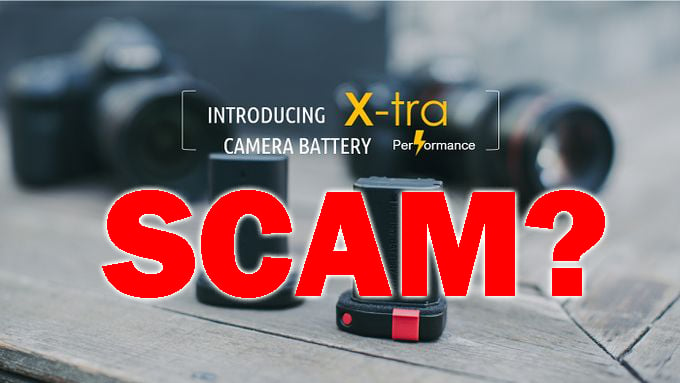 In November last year, we shared a Kickstarter campaign for a battery many of us would found useful. The X-Tra battery offered longer shooting time with a smaller, lighter battery, and the campaign was funded in no time. However, Canon Rumors recently came to the conclusion that the campaign might have been a scam.

Before the campaign ended, Canon Rumors was offered 20% of all sales driven to the project. They became suspicious when they reached out to Kickbooster, who reportedly said that they hadn’t got in touch with anyone from the project.

After some digging on the “CEO Jeffery Parker” and the “CTO Arthur Lau,” Canon Rumors allegedly realized that the CEO’s photo is actually a stock image. “I have reached out directly to the email addresses I have for the campaign and I have obviously heard nothing back,” Canon Rumors claims. “They have also stopped replying to anyone on the Kickstarter page.”

When you visit the Kickstarter page of the project, you can see that the deadline was six days ago. People have been leaving comments ever since, but there are no replies. The latest replies to the backers’ comments were sent 15 days ago. Some backers required a refund because the battery isn’t compatible with their camera. The manufacturer responded that the group refunding for the backers with similar issues would be done “after the survey collection is completed.”

This whole thing reminded me of that major fail from a few years back. Remember that Yashica digiFilm Y35 camera? Backers went crazy about it, it even got delivered to those who backed it… But it turned out to be a complete piece of sh*t. Still, it didn’t stop Yashica to launch another campaign which, to my great surprise, got fully funded.

Now, I’m not claiming that this is a scam nor that it isn’t. With a crowdfunding campaign started by unknown companies, everything is possible. I haven’t heard from anyone who has preordered the X-Tra battery, so if you have, let me know what your experience is. We have contacted the manufacturers and will let you know if we hear back.

Editor’s note: DIYPhotography has never had any involvement with the X-Tra battery nor its Kickbooster affiliate programme. We posted about it here because we thought it was a neat idea. We remind all readers that if you’re thinking of investing your money into any crowdfunding campaign that you should do your research and due diligence beforehand.