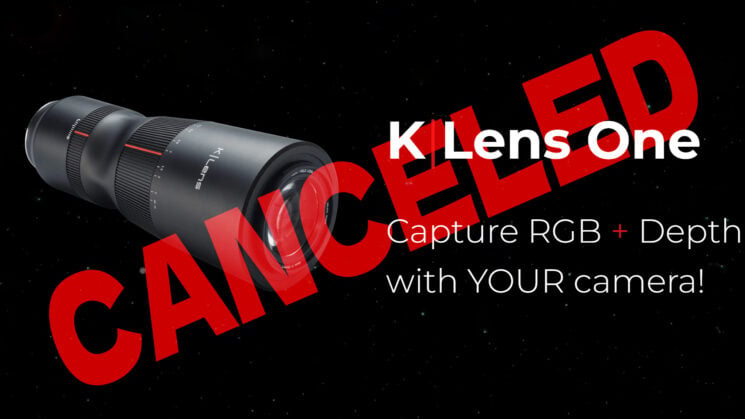 The idea of cameras and lenses that let you refocus your photos after shooting has been around for a while. But after Lytro, another one seems to have failed. K|Lens One, a light field lens that captures depth information, has canceled its Kickstarter campaign and it won’t be launched after all.

The K|Lens One was announced last year, and the Kickstarter campaign was started shortly after the announcement. A cool thing about it is that it’s not a whole camera system that captures depth information about your images. Instead, it’s only a lens and it works with any camera you already own.

The Kickstarter campaign was pretty successful in terms of funding: the backers pledged $228,796 of the $85,995 goal. However, it looks like it wasn’t enough to start off the actual production of the lens. At least not yet. In an announcement on Kickstarter, the makers wrote:

We thank you very much for your trust in our product and team.

We have carefully reviewed our financial assumptions on product pricing and production costs. We have come to the conclusion that, currently, also given the financing of our start-up, we can not guarantee the production and delivery.

We therefore decided to cancel the campaign today.

We are very disappointed for breaking up now after 5 years of extremely hard work and are sorry for not fulfilling the expectations of the community. On the other side, if we promise a product, we want to deliver what we promise and this is something we just cannot guarantee today. We will be working hard to relaunch in the near future.

“Better to cancel now and figure solutions to your problem than collecting our money but unable to deliver,” a backer writes as a comment to the announcement. Looking back at the Yashica Y35 “DigiFilm” fiasco, I certainly agree with this.

Judging from the announcement, for now, there is no plan to refund the money to the backers. Instead, the makers plan to relaunch the campaign and deliver the product they promised.

[Update 4 Feb 2022: the money has not been collected yet from the backers, so there is nothing to refund at this moment. Thanks Benjamin for clearing that out!]