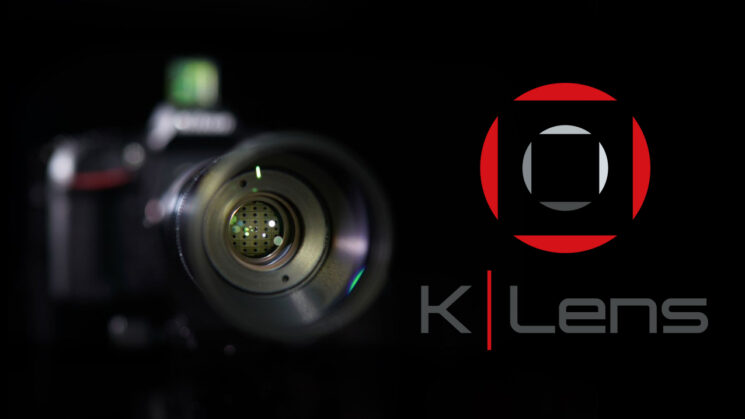 Although the idea’s been around for a while, it wasn’t until Lytro came along with their whole “this camera lets you refocus in post” talk that the whole Light Field Photography thing really hit the popular consciousness. Now, it’s been around for a little bit, and while Lytro switched from photography to Hollywood, ditched their previous customers and sold out to Google, they weren’t the only player in the game.

The new K|Lens One, which appears to be launching via Kickstarter soon, makes similar claims to those of the Lytro cameras of old, capturing both image and depth information simultaneously in a single image. Except, this isn’t a whole camera system. It’s just a lens and it goes straight onto the camera you already own.

The idea is quite simple, according to the video. The K|Lens One contains various mirrors and optics inside it which split up the incoming scene into nine separate images, with each one viewed from a very slightly different position to the other eight. All nine of these images are projected onto your sensor and recorded in the image. K|Lens says it’s effectively like shooting with 9 cameras at the same time.

After you hit the shutter, each of these 9 views is saved out into a single file as a 3×3 grid. So, you’re really dropping the resolution of your shots down by quite a significant amount. The somewhat massive 60.2-megapixels of the Sony A7R IV, for example, at 9503×6336 would drop down to around 6.7-megapixels per segment, with each being ~3168×2112. This means that once it’s processed and reconstituted, that’s about your final output resolution, too.

If the images are only going to social media, that’s not a big problem, but if you actually want to tweak and output high-resolution files, then you’re a little out of luck. The voiceover for the video above is super optimistic, using big technical terms – kind of reminds me of the Rockwell Retro Encabulator – so don’t buy into the hype.

Likewise, if you wanted to use it with video, where it might arguably be more useful, for things like visual effects, then even shooting 8K would result in 2.7K footage. To actually get a 4K final result, you’d need to be using it on a Blackmagic URSA 12K with a speed booster to get that full-frame field of view – assuming it even works with speed boosters on Super 35mm sensors.

Don’t get me wrong, it’s very cool, but it’s not the magical future bullet that the promotional video above might lead us to believe!

Exactly what mounts the lens will come in is confusing, because of the way it’s worded, stating that it is “compatible with EF, F, E, L, RF and Z mounts when using an optional commercially available adaptor”. But it’ll be available in at least one of those, maybe two (I suspect F and EF) and then adaptable to the rest, (I’m assuming the mirrorless mounts, due to their much shorter flange distances).

Anyway, it’s supposed to be coming soon to Kickstarter, although they don’t say when yet. But I’ve seen a couple of ads pop up for this on social media lately, so I don’t expect it to be too long. For now, though, if you want to find out more about the K|Lens One, head on over to their website.

« Nikon Z30 announcement within 2 weeks? Nikon event scheduled for first week in June
What the heck is an optical snoot and how do you use one? »