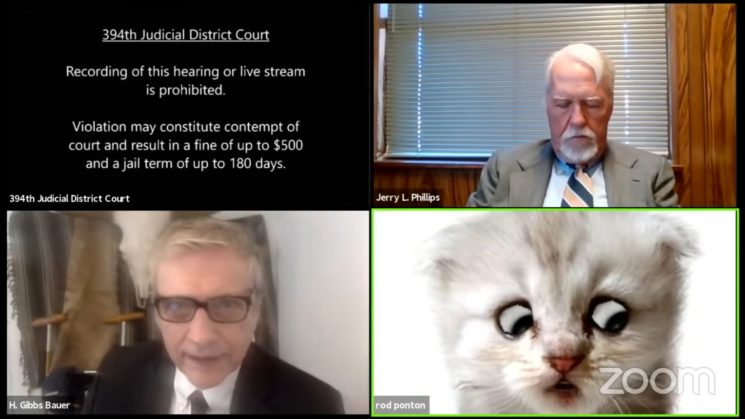 Most meetings are happening via video call platforms nowadays. And where there’s video, there are video effects. Sometimes they appear in the most inappropriate situations, and this is exactly what recently happened in Texas. When a Zoom court hearing began, one of the lawyers appeared looking like a cute, sad, little cat thanks to a filter he accidentally turned on.

The court proceedings in the 394th Judicial District Court of Brewster was streamed live via Zoom.  The members of the call were the judge, attorneys Jerry L. Phillips and H. Gibbs Bauer, and the sad little kitten. Actually, the kitten was an attorney Don Ponton who apparently struggled a bit with technology.

“I logged into my secretary’s computer to appear at this hearing via Zoom, and when everybody’s ready the judge calls the case and everybody’s face is supposed to pop up on Zoom,” Ponton explained. “And everybody’s face popped up except mine. Mine was a cat.” But the judge helped Ponton to remove the filter and the hearing proceeded soon with no kittens in the frame.

As you can imagine, the video quickly went viral. And how could it not? It’s an extremely serious and formal situation messed up by something so childish and cute. That’s always fun! After it went viral, Judge Roy Ferguson tweeted: “IMPORTANT ZOOM TIP:  If a child used your computer, before you join a virtual hearing check the Zoom Video Options to be sure filters are off.”

It made my day when I saw it on Instagram today. Also, it reminded me of the time when a Pakistani politician used a cat filter during a press conference. Seems that cat filters are especially popular in serious situations.