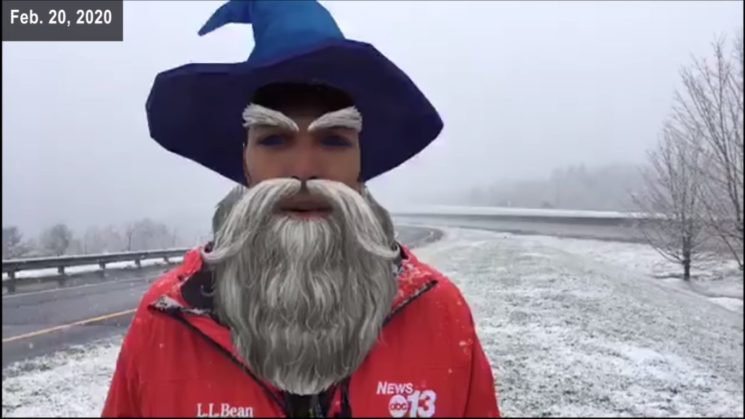 WLOS ABC 13 anchor Justin Hinton recently made people worldwide laugh while he was doing an on-location report. He accidentally left face filters turned on during a live report he was broadcasting on Facebook. As he was talking and being all serious, the filters would give him a helmet, a golden medal, googly eyes, and whatnot. The video has quickly gone viral across social networks, and it’s no wonder because it’s absolutely hilarious!

When you're trying to do a serious Facebook Live about the weather and you accidentally tap the Mystery Mask filter. Poor Justin Hinton. ?More on this story: http://bit.ly/2PexYkK

Justin was reporting on the “first legitimate snowfall this season” in Asheville, North Carolina. According to WLOS ABC 13, he accidentally tapped the Mystery Mask filter. “Poor Justin Hinton,” they wrote when sharing the video. It amassed hundreds of comments and shares, and it ended up all over the internet and TV.

Funnily enough, I’m currently in Belgrade which also saw the first decent snowfall this winter just last night. Since snowy days are all gloomy and gray, watching Justin’s video really improved my mood. When he turned into a wizard, I started laughing out loud.

But how did this happen? After his live video went viral, Justin explained what went wrong (or if you ask me, it went totally right). “Right before going live on Facebook on the WLOS ABC 13 station account to talk about snow, I somehow activated a filter generator, Justin wrote in a Facebook post.

“The photog I was working with said something about the screen having weird faces. He didn’t elaborate, so I said it would probably go away. Needless to say, it did not go away. I didn’t realize it until I stepped off camera and saw the comments where people were talking about the faces.”

I just love it with how much humor Justin handles the situation. He says that everyone started texting and calling him after the broadcast to tell him how funny it was: from his bosses and coworkers to his friends. So, he shared on Twitter and Facebook all the filters that the app put onto his face while reporting. “If you can’t laugh at yourself, what’s the point of laughter?” he writes. And I couldn’t agree more!

Make sure to watch the video above if you need some laughs. No matter what the weather is like today, it will definitely make your day brighter. Oh, and also take a moment to remember this accidental face filter moment. Just in case you need a stronger dose of laughter today.