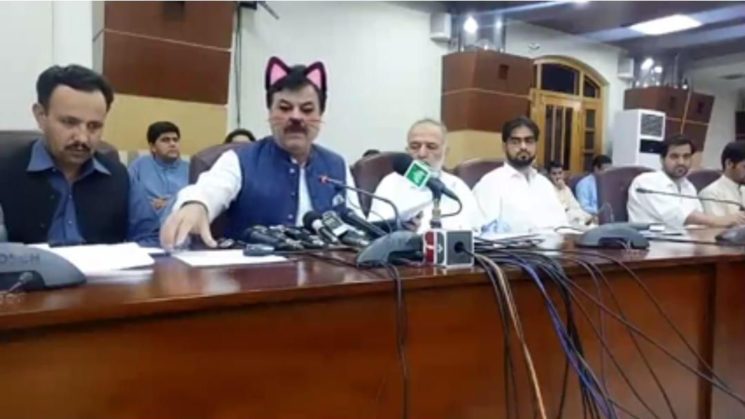 Last Friday, Pakistani official Shaukat Yousafzai addressed the public in a press conference which was live streamed on Facebook. It wouldn’t have been anything unordinary if his face hadn’t been modified with the “cat filter.” During the live stream, the politician appeared with digital cat ears, whiskers and rosy cheeks, which turned the press conference into a sort of comedy.

According to the BBC, the video was posted to the official Facebook page of the Pakistan Tehreek-e-Insaf (PTI) party. However, it was reportedly deleted only minutes after the press conference. PTI issued a clarification regarding the mistake, describing it as a “human error.” They added that “all necessary actions have been taken to avoid such incident in future.”

As the press conference was live streamed, the users were commenting on the comical appearance of Yousafzai. However, he was unaware of the gaffe until after the event. Speaking to AFP news agency, Yousafzai seemed pretty laid back about the incident. Reportedly, the politician said that it was a mistake and that it shouldn’t be taken so seriously. He added that he wasn’t the only one, as two other officials sitting next to him also had the cat filter applied to their faces.

According to KP government’s social media team we now have a cat in the cabinet #Filter pic.twitter.com/LNl7zwOfLU

But of course, deleting the video doesn’t mean that all evidence of its existence has disappeared. People have made screenshots, shared them on Twitter and Facebook, and apparently had a good laugh about them.

So this happened today when PTI's SM team forgot to turn off the cat filter while live streaming a press conference on Facebook. @SAYousafzaiPTI looks kinda cute pic.twitter.com/IjjJrua7DL

My favorite comment comes from Twitter user @RuralHuman, who wrote: “I propose all parliamentary proceedings around the world to be recorded with Cat Filters. Please start with the British Parliament!”

When it comes to my view on the matter, I agree with Mr. Yousafzai. It’s just a mistake, and it shouldn’t be taken so seriously. And if I may suggest Serbian politicians to also apply the cat filter during their speeches and pressers. No one takes them seriously anyway, so this would be a really nice touch!

Lawyer accidentally turns on cat filter during a Zoom hearing