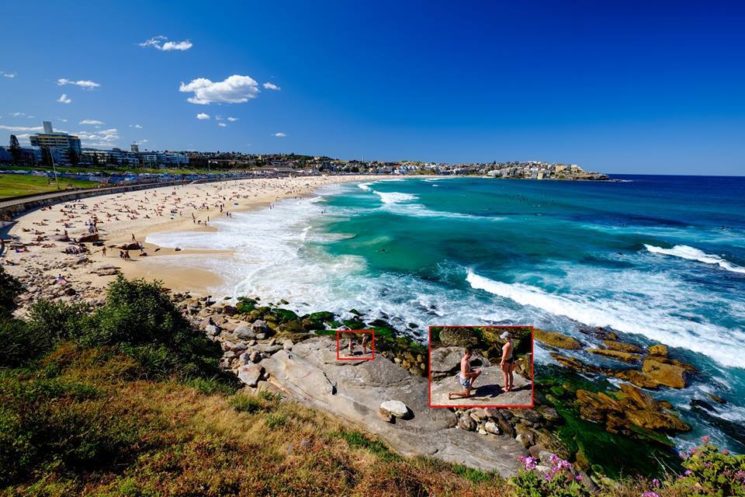 The power of social media amazes me sometimes.  A recent quest for a couple who accidentally ended up in a tourist’s photo show exactly how powerful Facebook and other social networks can be.

Martin Cervantes, an Argentinian amateur photographer living in Brisbane, visited Sydney for a weekend. As he walked from Tamarama Beach to Bondi Beach, he was taking photos as he always does. He later realized that he captured an engagement of an unknown couple. He shared the photos on Facebook, trying to track them down with the help of the community. And in only a day – the happy couple was found.

Martin didn’t even notice the couple in the photos. As he tells Global News, it was only when he shared his photos with friends and family that his brother pointed out to the couple. The guy was kneeling down, and by the hug from the next photo – it seems that the gal said yes.

Since he captured such a special moment, he turned to Facebook in an attempt to find the couple. He shared the three photos of the engagement on his Facebook profile, hoping that the “six-degree-of-separation-rule will help find them.”

THANKS to everyone who helped sharing this post, we found the couple from the photos I took and they are really happy to…

A day after he posted the photos, someone tagged Lyall Bezett and Amelia Wright in the post. Yup, that’s the couple from the photos. And of course, they were thrilled to have the photos of their special day. I know how amazing it is to see photos from an important event even when you know someone’s taking them. But I can only imagine the feeling when you discover that your special moment was captured although you didn’t expect it.

« Canon full frame mirrorless cameras with new sensor coming in 2018, reports say
You can all stop asking about camera settings now. Here’s all of them »