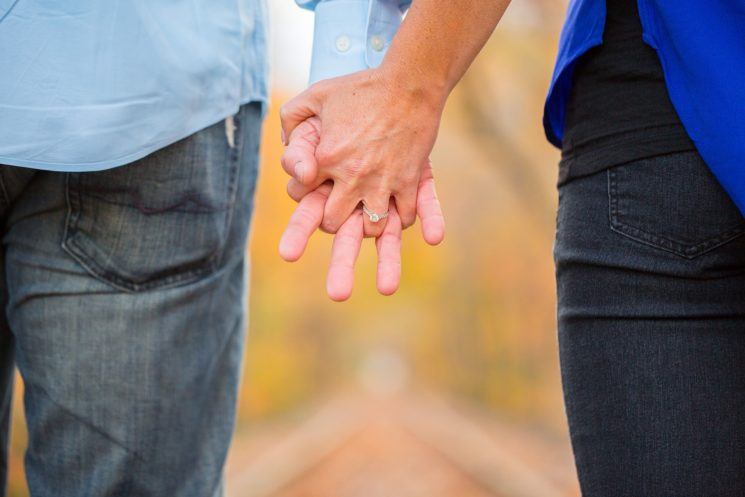 It’s 6 in the morning. After hours of driving and over an hour of hiking, the photographer takes his position near Hawksbill Crag in Arkansas. He is supposed to photograph an engagement, and the couple shows up as planned. The guy proposes, the girl says “yes,” and the photographer has some great shots of the moment. But there’s a catch – it’s the wrong couple!

What are the odds, you may ask? Well, for photographer Jacob Peters this seems to have been “one of those days” when life decides to show you all the weird tricks up its sleeve.

A guy from Wisconsin contacted Jacob to take engagement photos of him and his girlfriend on May 6, 2017. The engagement was to take place on Hawksbill Crag at sunrise, so Jacob woke up at 2:30 am and began his trip. When he got there, it took him over an hour of hiking and finding the right direction in the complete darkness, with only a cell phone flashlight. Finally, around 6 am, he got to his spot and set up, waiting for the happy couple to show up. And so they did, as Jacob explains in his Facebook post:

Around 6:17am a young couple shows up. It’s them. I’m sure of it. A little late but still not too late. They go up onto hawksbill crag. Hang out for a few minutes and then it happens. He pulls out a ring, kneels down behind her. She turns around and starts crying and hugs him and it’s obvious she said yes and all went well. I stick around for 10-15 minutes after, just taking photos. Then they sit down watch the sunrise and I figured my job’s done, I’ll pack up and hike out.

When he got home, he texted the client to say congratulation, but the message he received made him realize his mistake: “I’m confused, we never saw you and we got there a little late, are you sure it was us? I was in a blue plaid shirt…”

It turned out that the couple he was supposed to photograph turned up an hour late, when Jacob already finished taking photos of the wrong couple and began heading back. After the screw-up, he wanted at least to give the other couple the photos, but of course, he had no idea who they were. So he turned to Facebook for help. He posted an album with photos and the story, and within a few hours, the couple was found. Jenny and David are the couple from Dallas, and Jacob took photos of their engagement due to a mix of strange circumstances.

I’d say all this mess happened because of communication breakdown. Jacob only knew the couple he was supposed to photograph from phone calls, so he didn’t know what they looked like. After all, who would have thought there would be more than one couple of enthusiastic hikers getting engaged at sunrise at exactly the same spot? The clients were unable to contact Jacob as there’s no cell phone service in the area, that’s why they couldn’t let him know they’d be late.

As Jacob explains, all this turned out bittersweet. He made one couple’s engagement memorable (by chance), but the other couple ended up without the memories they expected. In an attempt to try and make it right, he started a GoFundMe campaign to fund a trip and go and photograph the couple whose engagement photos he failed to take. As for Jenny and David, they, of course, got their engagement photos for free.

Although this sounds pretty incredible, something like this could happen to anyone – you know what life can be like sometimes. But I think we can all learn something from this: communication is the key, as well as being prepared for everything.