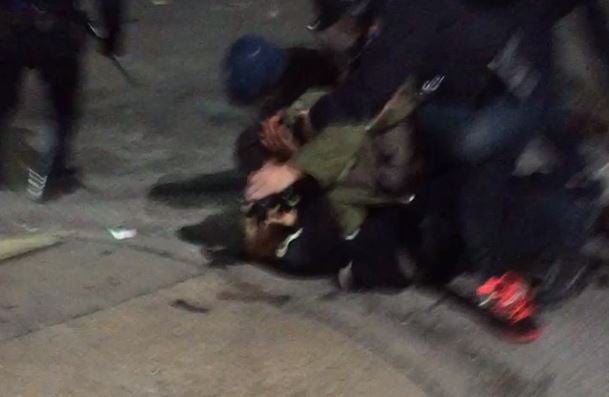 Photojournalist, J.M. Giordano, during an encounter with the Baltimore Police Department

Saturday night, huge crowds of protesters converged on the streets of Baltimore to protest the death of Freddie Gray, a black male who sustained life ending injuries during an arrest made by the Baltimore City Police Department on April 12th. Like many similar protests that have taken place in recent months, the protest began as a peaceful assembly before pockets of violence began breaking out.

During one particular standoff, in which protesters were reportedly throwing rocks at the riot gear clad officers, the police announced the assembly was no longer peaceful and ordered the protesters to leave the area. According to the Baltimore Sun, the police made an announcement that went “something like, ‘This is no longer a legal assembly. This is no longer a peaceful protest,'” just before they backed off, creating a wider distance between the officers and the protesters.

Very soon after, J.M. Giordano, a photo editor for The City Paper, was pushed to ground by the police, having his “face pretty much smushed down on the ground.”

Giordano reported, “They just took me down.”

He sustained multiple bruising during the event, which you can watch a clip of, below. In the video, you can hear Giordano’s co-worker and managing editor inform the police involved in the incident that Giordano was a photographer and was covering the event as part of the press. Following the interaction, Giordano said he simply got back up and continued on with his work, taking photos of the protest.

Me being beat on by several @baltimorepolice. Video by Baynard woods. #freddieGray #baltimore

In a separate incident, which took place at the same time and in a location within close proximity of the Giordano take down, a second journalist, Sait Serkan Gurbuz, who was photographing the protest for Reuters, was detained by officers. Gurbuz was issued a citation for a “failure to obey orders” as he was photographing a confrontation between the police and a photojournalist. Though it has not been confirmed, the confrontation may be the one involving Giordano.

Gurbuz’s only comment was, “I was there taking pictures.” A spokesman for Reuters added:

“Serkan was on a public sidewalk and the events were happening in plain view. We do not agree with the police’s citation for ‘failure to obey orders,’ as Serkan backed away from the scene when the police demanded that he do so, or with the way in which he was treated by the police. We hope the Department will dismiss the citation and, in the future, respect the First Amendment right of the press to lawfully take images in the public interest.”

Gurbuz was released once the police confirmed he was press. A spokesman for the Balitmore Police Department, Capt. Eric Kowalczyk, said, “We are working to reinforce throughout the organization that media should be allowed to have as much access as they possibly can.”

In defense of the police department, Kowalczyk noted it can often be difficult for officers to distinguish press from protesters during such high tension events. He also explained that police commanders gave instructions to the police officers, which said members of the press were to be granted access to all interactions between police and protesters.

Kowalczyk concluded, “We apologize for the fact that he was detained.”

It was reported Giordano faces no charges.

The entire scuffle lasted only about 40 seconds.

The following photos are from Giordano’s Instagram feed and include some great photojournalism of the event leading up to, during, and after his incident with the police offers, including this one in which the photographer is sure to point out that not all cops are the enemy.

In another post, he specifically makes it a point to establish he is NOT anti-cop.

Status Update: First, thanks everyone for their concern. I’m OK. It’s an occupational hazard. PLEASE, PLEASE, PLEASE, stay focused on #FreddieGray. From what we know, he died after being in the back of a police paddy wagon for merely running away. Also, I’m concerned about the man who was next to me in the video. The police swarmed over us. After getting up, I kept shooting, again, it’s my job, I managed to get shots of him being arrested, as you’ll see later on today. I’m NOT ant-cop. There were quite a few that I’ve seen this week that have been talking to protesters and engaging, one took off his riot helmet just to talk, which I also have photos of. It’s cliche by now, but I don’t take sides. This video was posted so people could see what happened last night. They also arrested a Reuters photog who was just standing there, so make of that what you will. I imagine that Baynard Woods​’ sonic boom of a voice kept me out of the wagon. His phone died while recording this, so there’s no more footage. BUt like I said, I never stopped shooting. Please lets stay focused on Freddie and his family. Please. Also, the looters, who I stuck with, were local kids that had NOTHING to do with the protests of the day. Alll the protests up until now have been peaceful on both sides. NONE were family members that I could see. PLEASE share this statement. I have to get back out there today.

In the days leading up to Saturday’s protest, Giordano’s acquaintance, Matt Roth, grabbed this photo of Giordano showing a group of children how his camera works:

@citypaper #photojournalist @jmgiordanophoto being a cool dude during the #FreddyGray #protest tonight. #onassignment #peace A photo posted by Matt Roth (@mattrothphoto) on Apr 20, 2015 at 9:03pm PDT

[ via The Baltimore Sun ]