What’s up, photography fans! It’s Martin from All about Street Photography channel and today I would like to talk about a series of photographs. Placing third in the 2019 Photo Contest of the World Press Photo Awards in the Long-Term Projects, Stories. Let’s check out the State of Decay by Alejandro Cegarra.

Alejandro Cegarra was born in 1989 in Venezuela, where he lives in the capital city Caracas. He began studying photography in Roberto Mata Photography Workshop, while at the same time studying Publicity at Alejandro Humboldt University. In early 2012, he started filling in for other photographers at the largest newspaper in Venezuela, as well as other two newspapers. To this day Cegarra works for multiple newspapers and news outlets.

In addition to the World Press Photo Award, he also received the Leica Oscar Barnack Newcomer Award, third place in the Sony World Photography Awards in the Contemporary Issues category, and was chosen by the Magnum Photo Agency as part of their 30 Under 30 contest. You can find a full list on his website.

I was fortunate enough to interview him about his photographs and how he was able to capture the moments that earned him the World Press Photo award.

The State of Decay is a photo project that was created during anti-government protests in Caracas, Venezuela from March 2013 to March 2018. Now, you might have probably heard about the problems in Venezuela and the economic crisis the country is in right now, but let’s take a look at the history of the problems. 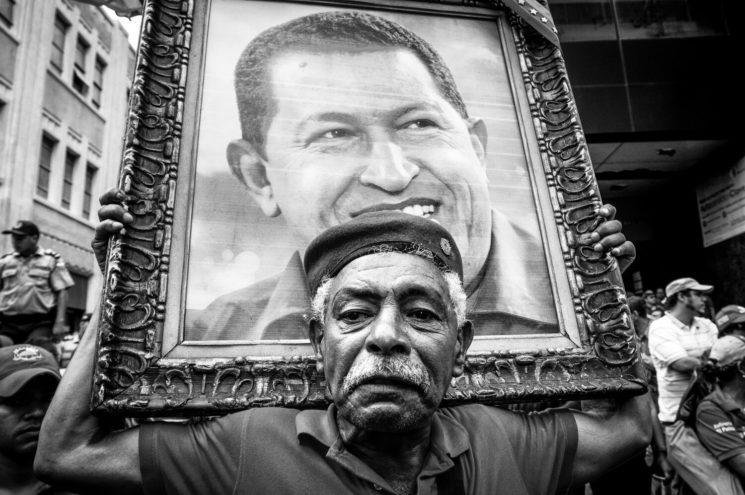 03 August, 2013 A man holds up a portrait of Hugo Chávez during a political rally led by Chávez’s successor Nicolás Maduro.

Venezuela experienced the biggest economic growth from 1999 to 2013 during the presidency of Hugo Chávez, mostly thanks to the oil prices as Venezuela has the highest proven oil reserves in the world. The prices were constantly growing and Venezuela was able to finance welfare programs and building houses for the poor. The prices grew from 25 USD per barrel to more than $160 per barrel. However, this time of prosperity ended when global recession throttled demand for energy and sent oil and gas prices into a precipitous free fall when the prices started to drop. By the end of 2008, the prices dropped to 53 USD per barrel. The prices started to recover next year and reached 125 USD per barrel over the years until 2014 when it experienced another drop.

President Nicolás Maduro who came to the office in 2013 continued the welfare programs which resulted in over-expenditure and ultimately hyperinflation. Together with the US sanctions, the Venezuelan economy crashed. Manufacturers were forced to close down and in 2015 Venezuela had over 100% inflation—the highest in the world and the highest in the country’s history at that time. Unfortunately, as the situation escalated, Venezuela spiralled into hyperinflation causing poverty to rise to nearly 90% of the population. As the situation escalated, there was a shortage of food, medicine and other essential items. Cegarra tells the story of the country slowly falling apart. He felt it was his duty to document the issue, as the situation was worse day by day. He said it was a powerful motivator but also a heavy burden. The photographs were taken with a Nikon D300, Canon EOS 5D Mark II, Mark III and Mark IV, and Leica M Typ 240.

Cegarra is using his 5D Mark IV for assignments and his Leica for personal projects. 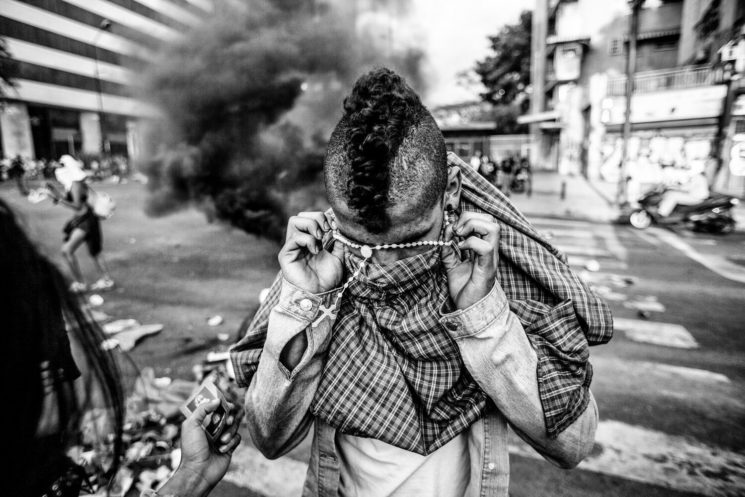 12 March, 2018 Children gather for lunch outside a community dining room in Caracas, Venezuela. They have to bring their own spoons, as cutlery is expensive. Such dining rooms, largely funded by private institutions and NGOs, have opened around the country to help tackle a chronic food shortage.

The final selection of 29 pictures was made from 25 thousand pictures. My personal favorite photograph is a demonstrator that puts a rosary over his head before clashing with the Bolivarian National Guard during anti-government protests in Caracas, Venezuela. Cegarra’s favorite shot is a woman trying to halt National Guard anti-riot officers during protests against the Venezuelan government. For him it represents how the common citizen feels against the government, it has a powerful message as well as composition.

Some of the moments probably happened pretty fast but for his portraits Cegarra tries to build close relationships. The project, for him, was documentation of losing the place he and the people living in Venezuela call home. 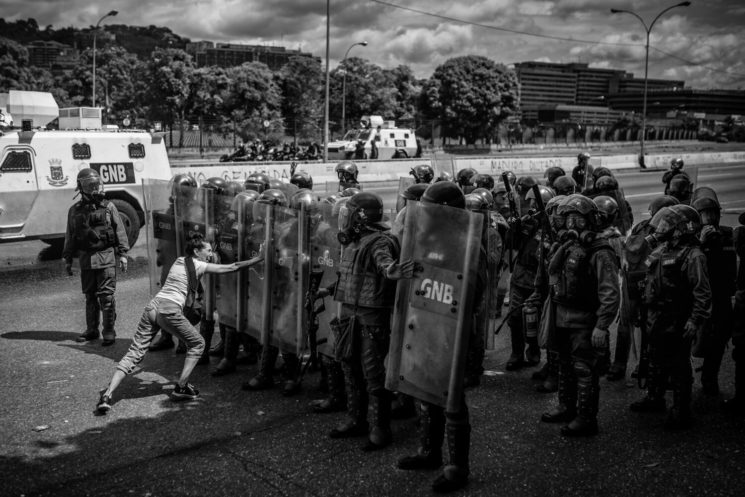 06 June, 2017 A woman tries to halt National Guard anti-riot officers during protests against the Venezuelan government on the Francisco Fajardo highway in Caracas.

This project took a lot from me, physically and mentally, I was living what I was photographing, so the experience during the project is a constant struggle trying to put some ground between me and the photographs, which wasn’t always possible.

Cegarra was photographing as part of a group during police raids and protests and alone when taking portraits. As you can see, the project is completely in black and white. But when you look at Cegarra’s Instagram you can see he also shoots colors.

Black and white is drawing, which is my first language as a photographer, color is painting, so it depends on what I want to do, how I want to address the issue, but lately I just do black and white on demand, color has caught me entirely.

I think this project is a great example of using photography for documentary purposes. I often find myself treating photography mostly as a fine art. But projects like this make me realize how important photography is for telling the stories, unlike any other medium.

I would like to thank Alejandro for the opportunity to talk about his project. Make sure to check out his website and social media to find more incredible stories.

Martin Kaninsky is a photographer and YouTuber based in Prague, Czech Republic. You can find out more about Martin on his website and follow his work on YouTube and Instagram. This article was also published here and shared with permission.