Firstly, it comes to you from  Martin Kimeldorf, the guy who converted his lightstand to backdrop mount.

Secondly it is the HUGEST bouncer I’ve ever seen. Excluding the ceiling bounce, of course.

I lost my lumiquest pocket bounce, dang! Being of DIY persuasion I decided to investigate the designs others had come up with…and there were plenty. I wanted to combine the 45 degree angle of the lumiquest with the dish shape found in other DIY bouncers. I researched, cut, glued and tried several versions before coming up with the following design. In the process I found that a hot glue gun does magic when attaching foam to foam and Velcro to foam. I have tried it both 12 inches and 10 inches tall and found them so similar that I ended up sticking with the smaller version because it felt more mobile. The diagram shown next gives you both height versions. 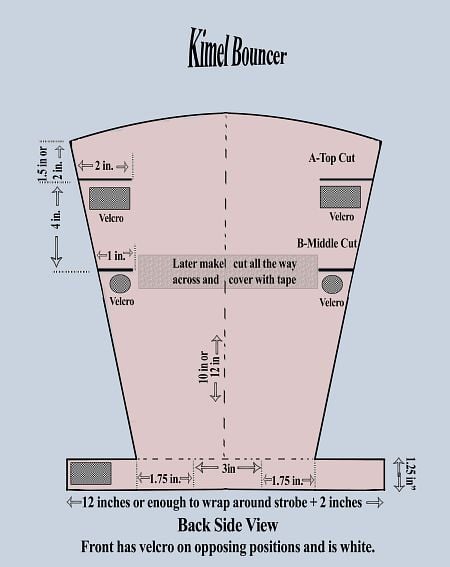 The image below shows the 12 inch high model strapped to a flash. In later refinements I replaced red Velcro with white Velcro. Here the red shows up nicely for the photo. 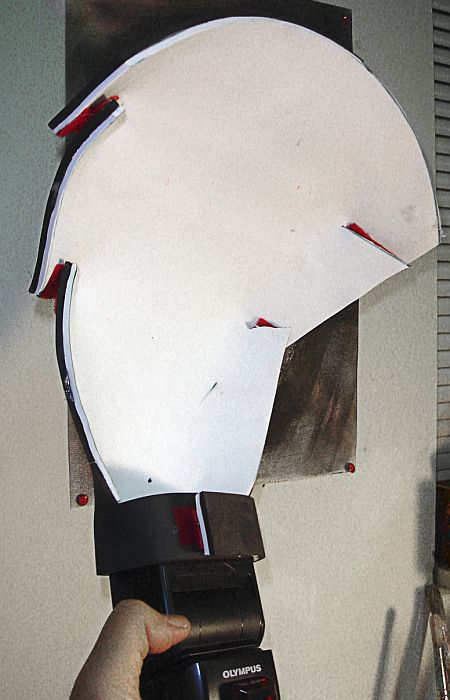 Profile view of the 12 inch prototype. Later, I added material with the diffusion level of parchment paper in front of the diffuser to create a softer light. It hangs from the top and Velcros to the bottom to stay in place. 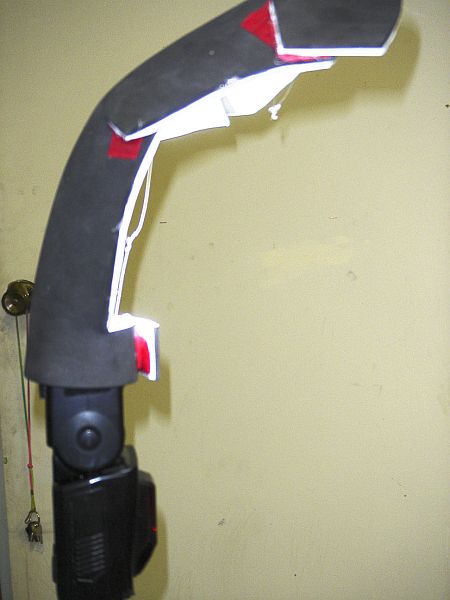 1) Glue a piece of 12 x 18 white on top of same sized black foam. Just add enough glue to keep the two pieces together while you cut it out in the next step.

2) Draw an outline of the shape as shown in the initial drawing. Choose between the larger 12 inch high verses the 10 inch high size. To draw the arc across the top, pin a string at once end and loop it around your marker as shown next. 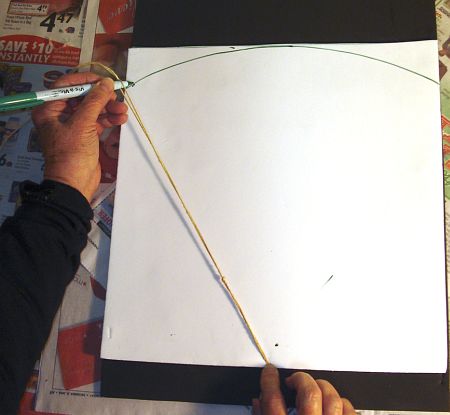 3) After cutting out the shape, run hot glue bead along all the seams that appear unglued. If you have not worked with hot glue guns before, you may want to practice on smaller pieces first.

4) When done, hot glue in the Velcro front and back. Here is a detail showing the Velcro being placed on the front (white side) and lined up on the back (black) side. 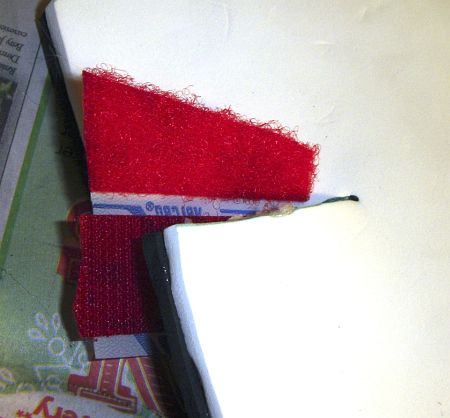 5) I like to run a cut line all the way across along the B Middle Cut. This way I can fold it in about half and store in a large zip lock bag. The folded up version is shown next. 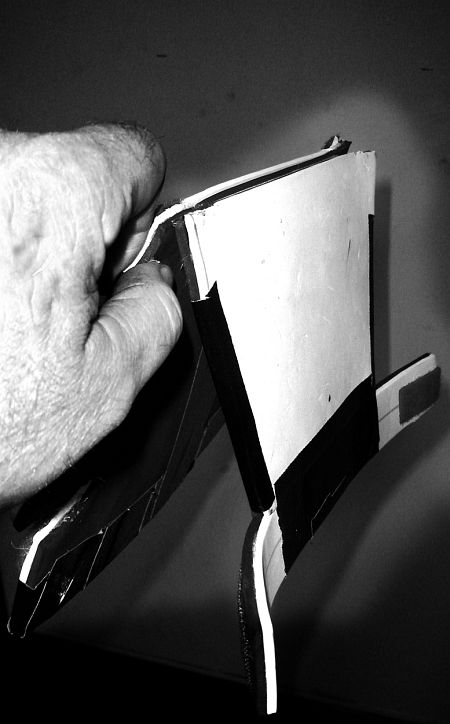 6) I then like to run tape along the sides, across the cut line on the back side to give it a finished look and protect the edges at the same time. 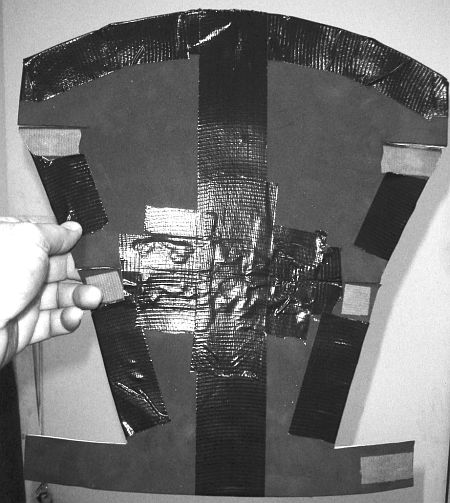 7) I found that if I added a diffuser material to the front, I get a cross between a bouncer and umbrella effect. Just cut out a piece of diffuser material that is about 2 inches wider and taller than the bounce. Then find appropriate places to Velcro the diffuser in place. My sample is shown next.

Diffuser cut out and taped, Velcro added. This is the back side of the diffuser. 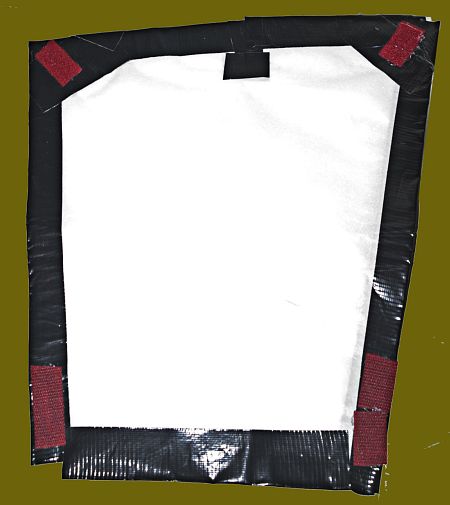 Diffuser mounted on Kimel Bounce, flashing its soul towards you. 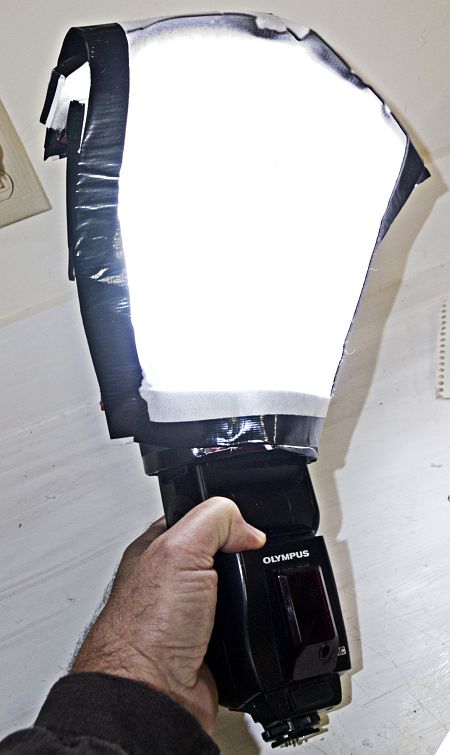 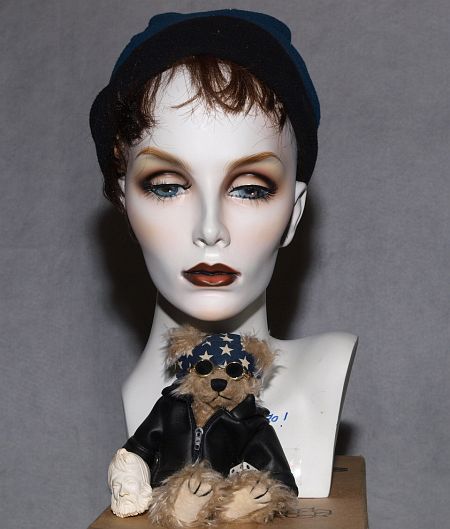 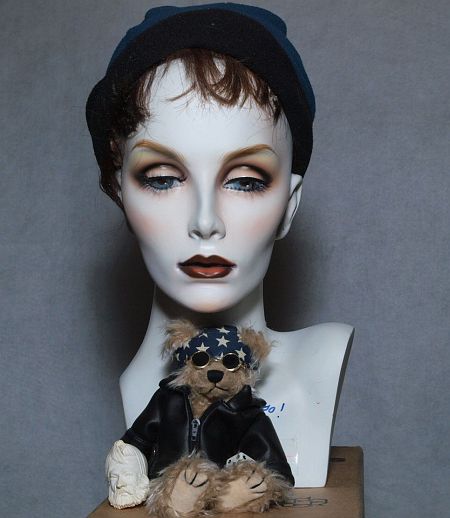 Adding a diffuser to the bouncer softens the shadows further a bit. 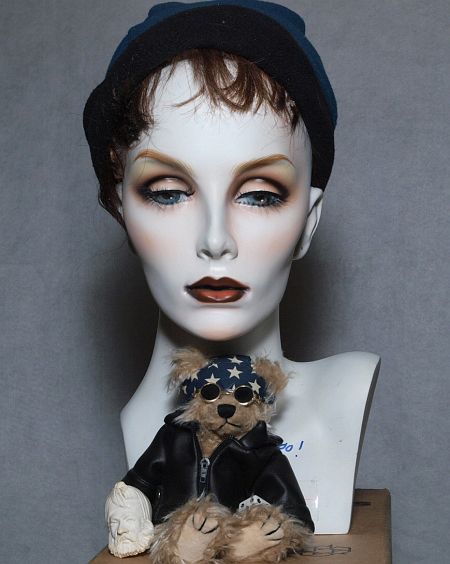 Moving the flash off camera, left, with the Kimel Bouncer. 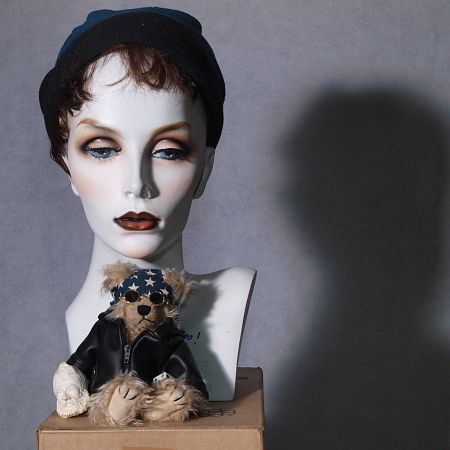 Adding a diffuser material further softens the shadows even more 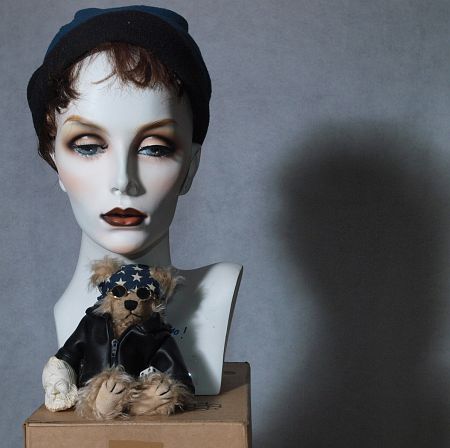 Comparison to using an umbrella where shadows are softest yet. When you can’t use an umbrella, this bouncer + diffuser might be a good compromise. 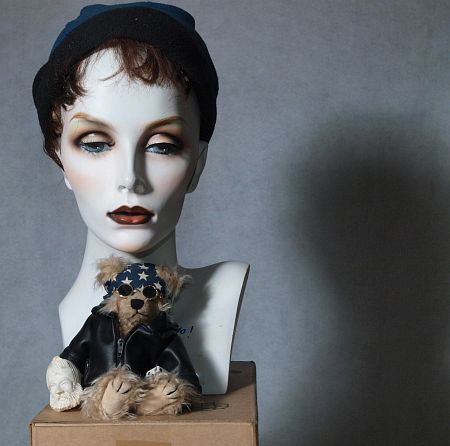 Martin Kimeldorf is a retired teacher and writer. His initial attempts at “strobing the universe with DIY items appear here, and his larger attempts at pixel play can be found on Flickr here. He lives with his wife and dog and Olympus E-3 camera in Tumwater, WA, USA.

The Party Bouncer is Back in Business (Card)