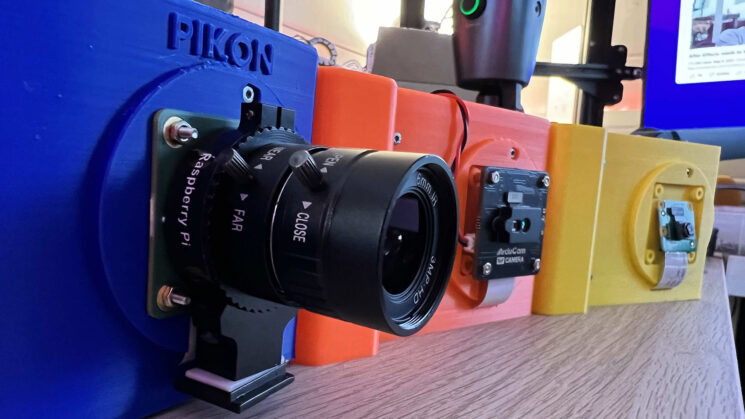 You know, it’s funny. I just want from saying how there are hardly any Pi 3 portable cameras out there that make use of the Pi High Quality Camera to offer interchangeable lenses and then a bunch pop up all at the same time. This one comes from Kevin McAleer, and it’s a bit like the Paparazzo, except in a much more convenient and useful form factor while still sporting a large touchscreen interface.

As it’s using the Pi HQ Camera module, it has a C-mount on the front to provide interchangeable lens options. You can even get C-mount adapters to let you use Nikon, Canon, M42 and other lenses on there, so you’re not just limited to C-mount lenses. It’s powered by a NanoWave 5000mAh USB battery pack and while the software still needs a little work, the hardware all comes together pretty well.

Kevin walks us through the design process as well as a complete assembly guide in the video above and he’s included more information on his website. It’s called the Pikon Camera and it’s a very well put-together little camera, utilising as much of the internal space as possible. And that grip isn’t just functional from a handholding aspect, it actually houses the 5000mAh USB battery pack that powers the whole thing – which can be recharged while it’s inside the camera.

It is based on the Raspberry Pi 4, although it should also work with the Pi 2 and Pi 3 models as well. I don’t know if Kevin’s provided separate housing models for the 2 and 3 given that their USB and Ethernet ports are flipped on the Pi 4, or if he’s simply made the holes large enough to accommodate both boards, but the STL file should be fairly easy to modify if you need to.

What I particularly like about this one is that the Pi HQ camera module itself is mounted on the outside of the housing. This means that the housing isn’t really specific to this camera module – as they all have the same mounting holes and there’s no lens opening to worry about. It also means that if you wish, you can swap it out for other cameras like the recently released Arducam 64-megapixel autofocus module.

Kevin admits that the software setup still needs a little work, but given that it uses a pretty standard set of hardware, you can use pretty much whatever Linux camera software (or combination of software) you like on this thing to get it working exactly the way you want.