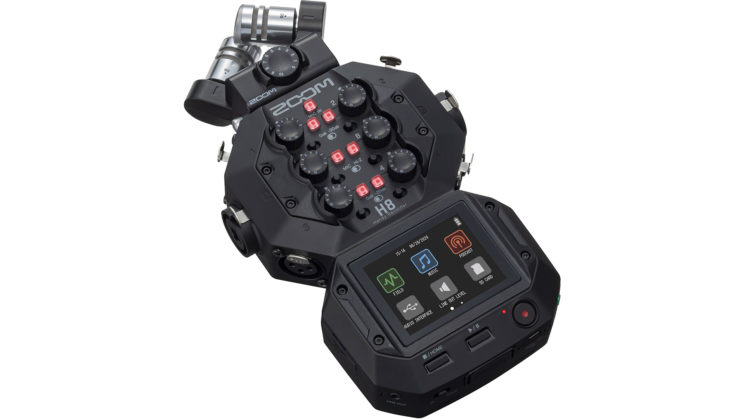 Zoom has announced the new Zoom H8 Handy Recorder, their newest field recorder which can record up to 12 tracks simultaneously using 8 separate input signals. It’s also expandable through various separately available capsules for recording 360-degree ambisonic audio or to take it up to 12 total inputs.

It features a bunch of analogue input dials, but what makes it particularly interesting is the 2.4″ touchscreen colour LCD and the “app-driven” interface it offers to provide several main modes of operation. There’s a Podcast App, a Music App and a Field App to cover a multitude of uses. And, yeah, it kinda looks like a spider when all the cables are plugged in.

The Zoom H8, Zoom says, offers an “extremely intuitive and user-friendly” interface. The three app modes are optimised for podcasting, music and field recording and can all be accessed by simply tapping on the touchscreen LCD.

The apps aren’t the only cool thing about the H8. It actually has 8 audio inputs, through four XLR inputs, two XLR-1/4″ combo inputs and 3.5mm stereo mini-jack input (on the included XYH-6 capsule). But you can also swap the capsule out for others that add an additional four XLR inputs with the EXH-8, shoot 360-degree surround ambisonic audio with the VRH-8 or use the XAH-8 module for X/Y or AB pattern recording. The Zoom H8 also supports all of the existing Zoom mic capsules, too. 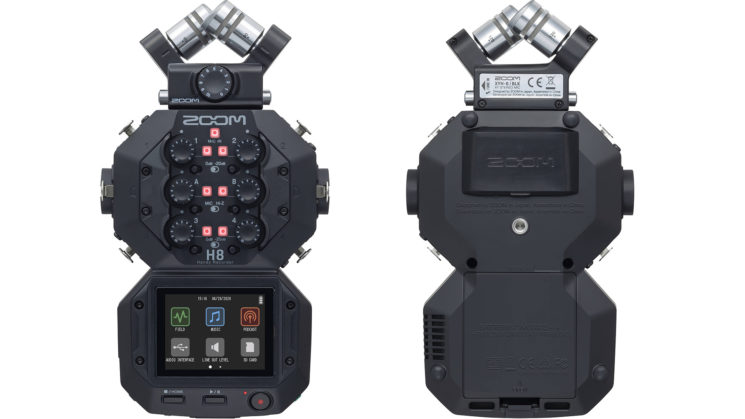 Each XLR input (and the XLR-1/4″ combo inputs) have their own dedicated gain knob. No need to mess around in a UI to select the track you want to adjust, just turn the appropriate dial and you’re done. There are also -20dB pads to help reduce the signal from very hot mics. And it can supply 12v, 24v or 48v phantom power to them all. It can also accept unbalanced instruments and +4dB balanced line-level sources, too.

Now, 8 channels of audio, especially if a bunch are using phantom power is going to chew through batteries. So, as well as being powered by four AA batteries, you can also plug it into a wall outlet, and they say that USB bus power is also possible – although it looks like a micro USB socket underneath, not Type-C, so you’ll want to have some spare cables handy for when the weak micro USB cables inevitably break.

The Zoom H8 records to SD cards up to 512GB in capacity. A tiny 2GB card offers over three hours at 16-bit 44.1kHz stereo WAV, but it will record all the way up to 24-bit 96kHz audio and it can do it for up to 12-tracks at once. So, those large cards can still start to fill up potentially quite fast with complex recordings with a whole bunch of microphones and inputs – which it can record either simultaneously or you can overdub.

As well as the built-in touchscreen UI, you can also use your iPhone or iPad to monitor the level meters, start and stop a recording or playback in each of the different modes. You do need to buy a Bluetooth module separately in order to get this functionality, and it’s only available for iOS, but it can do it. Hopefully, at some point, they’ll release an Android version. 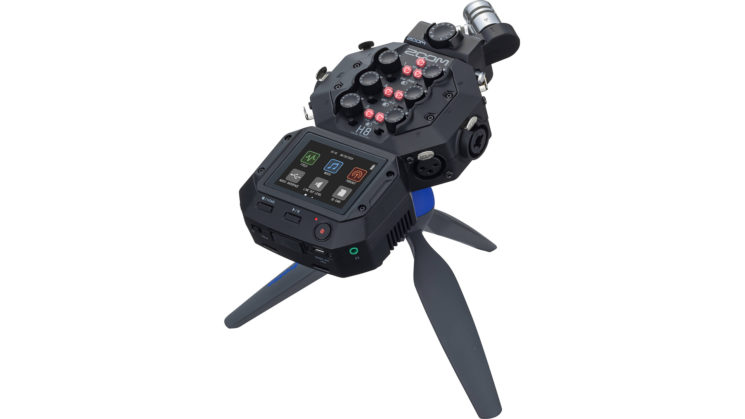 Included with the Zoom H8, you get a free license for Steinberg’s Cubase LE music production software and WaveLab Cast audio editing software to help you process and edit all your recordings. Personally, I think I’ll stick with Audition for my own needs, but it’s nice that they include software for those who haven’t already found a favourite.

Overall, the Zoom H8 looks pretty impressive, especially if you need a bunch of inputs. It’s nice to have the capability to boom a couple of shotguns overhead on an interview, for example, and also hook them up to a couple of wireless lavs and have them all recorded on the same unit at the same time. I might have to consider finally upgrading my old Tascam DR-100.

The Zoom H8 is available to pre-order now for $399 and is expected to start shipping in early August. You can find out more on the Zoom website.