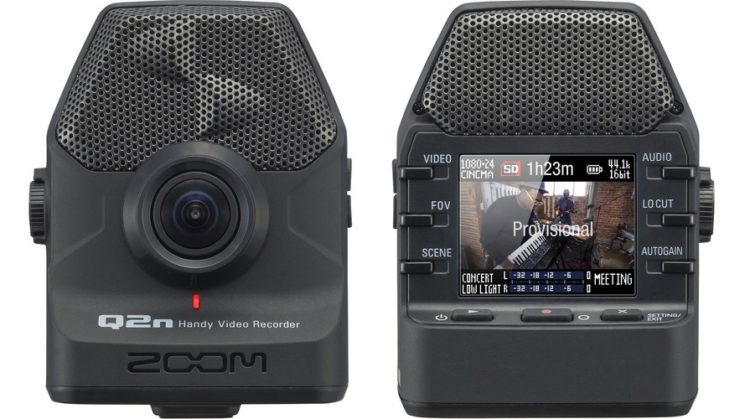 Bad audio is something that’s plagued action cameras since their inception. Some of them don’t do too terrible, and a few even let you plug in external mics. But action camera sound does generally tend to feel like an afterthought. Zoom have come up with a novel way of solving this issue. Instead of trying to cram better quality microphones into cameras, they’ve put the camera into the microphone.

That’s basically what the new Zoom Q2n is. A microphone with a camera & LCD shoved into it. It’s actually a pair of stereo microphones in an XY configuration recording at up to 96Khz 24Bit Far beyond anything available in other action cameras (or even DSLRs, for that matter). It shoots 1080p at 24 or 30fps. 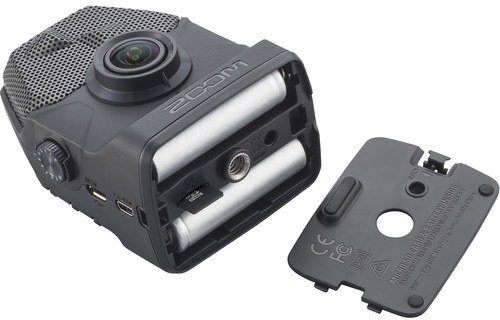 The Q2n is powered by a pair of AA batteries and records its data to microSD cards up to 128GB in capacity. It has a 1.7″ 160×128 pixel LCD, which I’m guessing probably not touchscreen. Despite having what is probably a pretty capable pair of microphones built in, it does allow you to insert an external microphone through a 3.5mm jack. It also has HDMI output, a 3.5mm stereo headphones jack, and a USB2.0 socket. It also has what looks like a standard 1/4-20″ tripod socket.

When you look at the specs, especially when you compare to things like the GoPro Hero5 Black and Nikon Keymission 170, it doesn’t seem like anything special. There’s no 4K, no image stabilisation, no underwater housing, no slew of accessories. But, when you consider the price, and the audio quality one expects from a Zoom device, it is a very attractive little unit if you can live within its limitations. 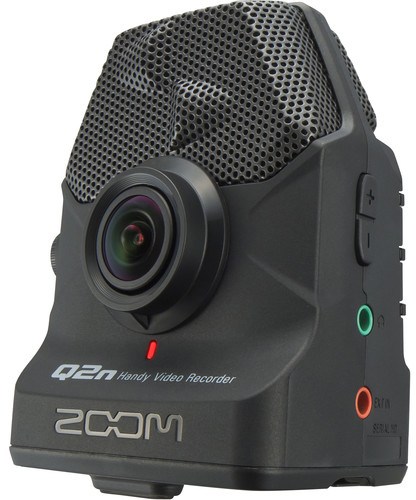 It does look quite brutal from the front, I grant you. It has a mostly symmetrical design, save for the microphone capsule housing. It’s a very different form factor from most of the action cameras we currently use.

There’s no mention of an underwater housing, so it’s not likely aimed directly at the extreme action market. I can see it being a very handy tool for vloggers, though, who feel a little frustrated with the sound quality of the alternatives. With a 160° wide field of view, I would imagine it’s fairly easy to ensure you’re in the shot, even if you can’t see the LCD. 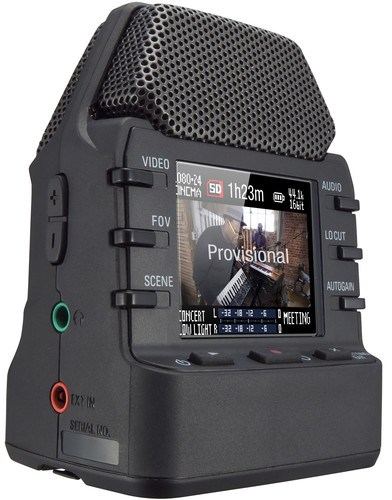 A pretty cool feature of this camera that’s definitely geared towards sound is that it can record the audio and video tracks separately. This makes it a lot easier for processing in post, getting rid of background noise, hums, etc. It can also be dedicated solely to the job of recording audio, without enabling the camera at all in Audio-Only mode.

When you’re not using it as a portable recording device, it can also serve as a webcam. Use it for Skype or live streaming over YouTube, Facebook and other platforms.

It’s a very interesting take on a type of camera that many of us already feel quite comfortable with. I’m not sure if this style of camera could oust the action cameras on a larger scale, but I can definitely see a purpose for such a camera. Zoom seem to be gearing it mostly towards musicians, judging by the sample videos already on YouTube.

I think it has a little further reach than that, though. The quality doesn’t look bad at all, and you can certainly hear the quality in the sound. I think this one might have to go on my list.

The Zoom Q2n Handy Video Recorder is available to pre-order now for $159.99. Deliveries are expected to start shipping out on November 14th.

What do you think? Can you see the Zoom Q2n fitting into your workflow? Replacing any current devices? Does it offer you options you don’t easily have right now? Let us know in the comments.