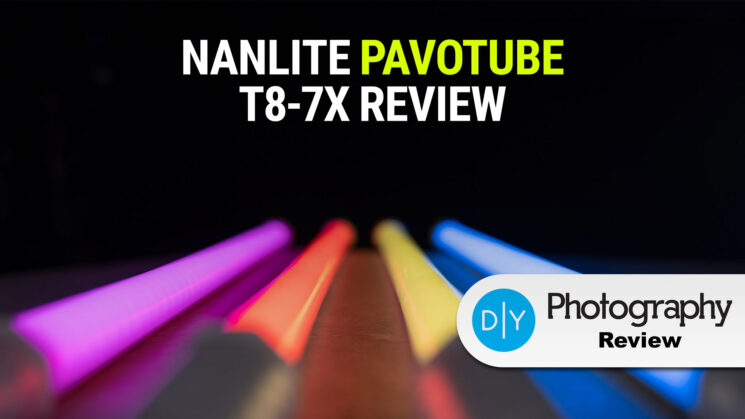 If you have been a photographer or videographer in the last 40 years or so, you probably hate fluorescents. Fluorescent tubes are such a crude way of lighting. They flicker, give our horrible (and unpredictable) color casts, and they can not be dimmed. Just horrible.

We previously reviewed the Nanlite Pavotube 30X as a replacement for some fluorescents, but what about those other fluorescent bulbs? Those thin, easy-to-break, really annoying, enlengthen tubes? The T8 type… For those, Nanlite came up with the Nanlite PavoTube T8-7X RGBWW LED Pixel Tube. And they are an interesting lighting solution indeed.

The problem with ‘old’ T8 lights 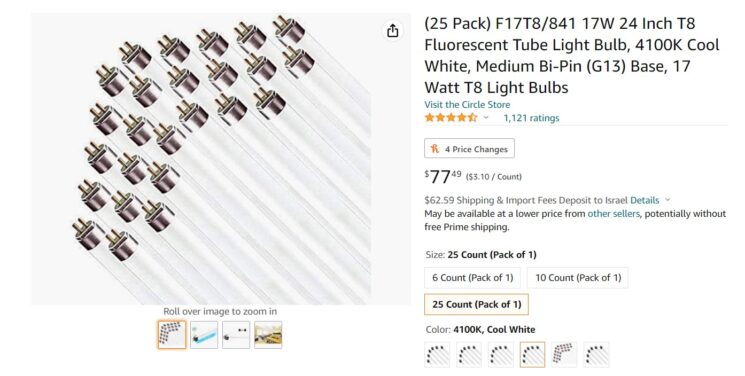 If you have ever dealt with those T8 bulbs, you probably hate them. Aside from being Flickerish, they tend to have weird color casts from green to purple and everything in between. Worst of all, they tend to break. This is why they sell them in packs of 25. These are not really lights that you can take into the field with you. And they also lack features like temperature control, RGB, dimming, or any sort of remote control.

The T8 tube light LED series is quite different from the regular Pavotubes. For starters, it has a different diameter. The T8-X7 are one-inchers vs. the “regular tubes” that are an inch and a half. They also come in a standard three-foot size vs. the options you have with the X or C thicker series.

There are quite a few other differences to your familiar tube, which result in a very lightweight led tube that is almost feather-ish in feel. 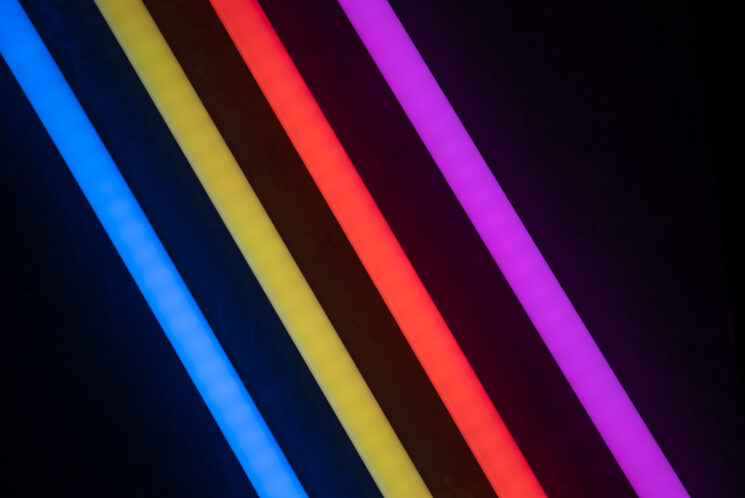 The light has a “bicycle handle” at the bottom, which provides a good way to hand-hold the light. I like that its white. This creates less annoyance when using it as practical light.

All the control are located at the bottom of that handle. And so are the 1/4-20″ thread and the USB charging socket. You can either like this arrangement or not. I found it to be a bit restricting. If the light is mounted on a stand or even rested on the floor, you lose access to the controls and charging ports. (at least with some stands). You can still use the app for control, but not so much for charging.

I wish the package included more ways to mount the kit, but your options are either that 1/4-20″ thread, hand holding it, or simply resting it on or against something – the floor, a wall, it’s so light, that really, anything goes. 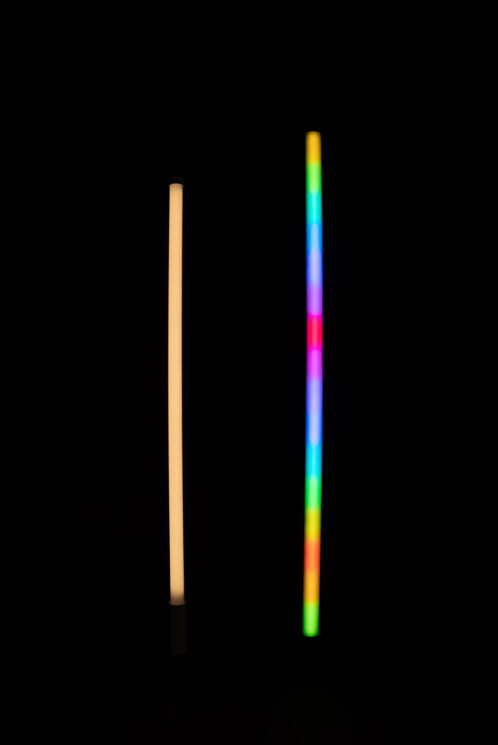 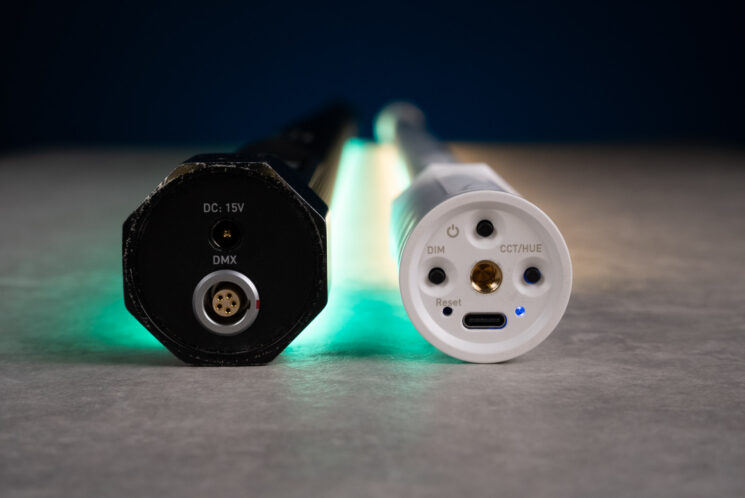 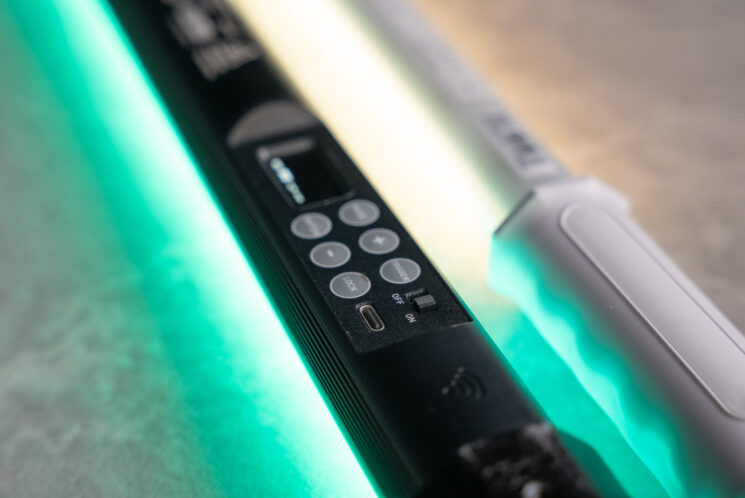 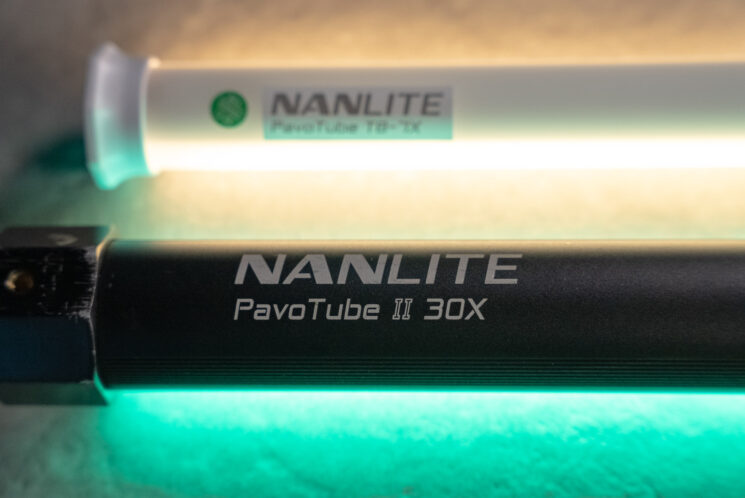 We received the $389.00 Nanlite PavoTube T8-7X 4-Light Kit, which has the following items in the box:

This is it. No accessories. No flare. A bare-bone kit. If you wanna go even more spartan, there is a single-tube option for $95.00.

The internal fabric of the case started frying after a few uses. So I would say it is a bit under the usual Nanlite standards. 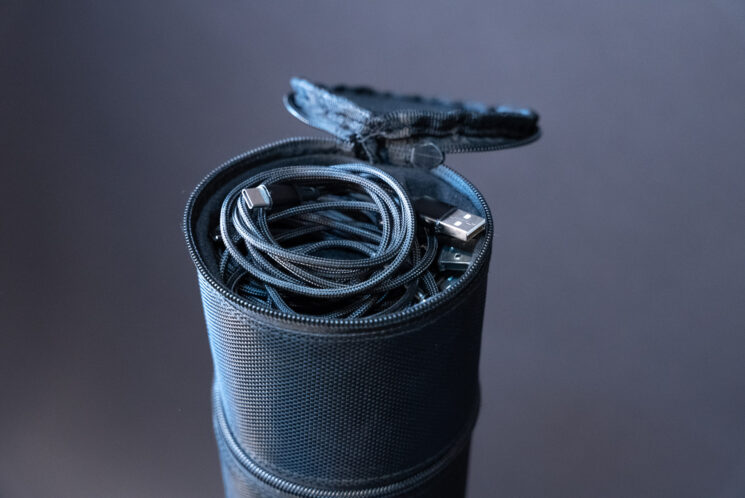 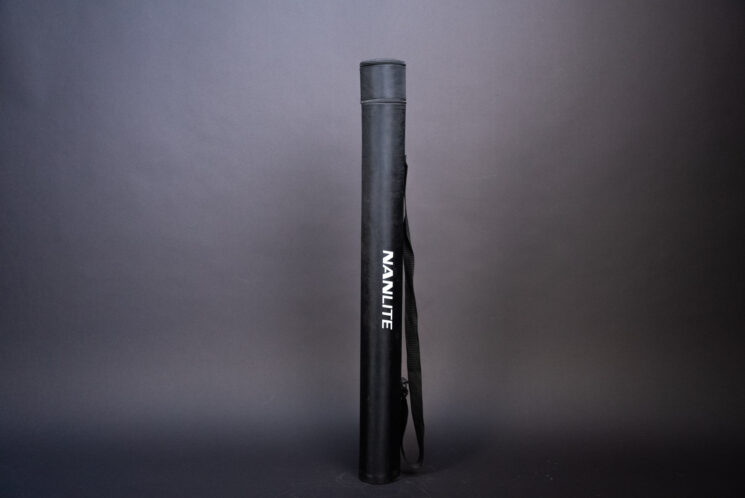 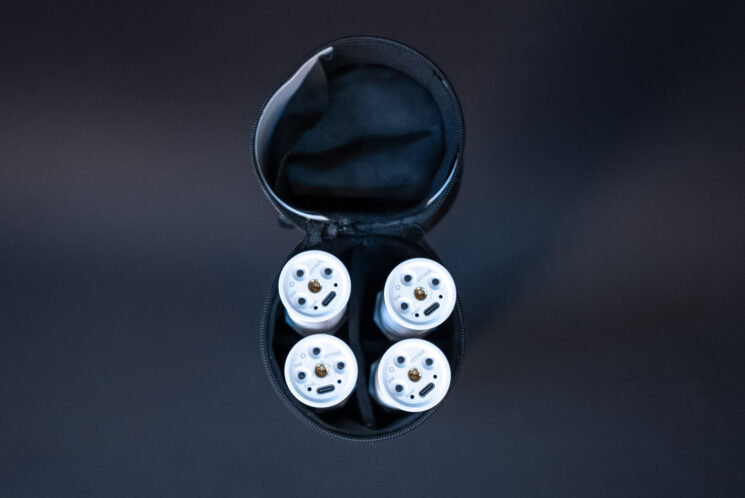 There are two ways to power the Pavotube T8-7X – an internal battery and a USB cable.

We tested about an hour of runtime on full power and got three and a half hours at 50%. This is pretty much the standard for LEDs right now – an hour of charging in exchange for an hour of usage at full power.

Of curse, you can use the USB-C port to supply endless power to the tube. It only draws eight watts, so even a small power bank will last “forever”. Or, if you connect the T8-7X to a wall charger, the low-power draw will work even with older 2A chargers.

You do need to consider that the USB-C port is very close to the mounting thread, so if you use a thick cable or a locking disc on your light stand, the cable will not fit. (The supplied cables are thin and work well, but they are also kinda short – about one meter) 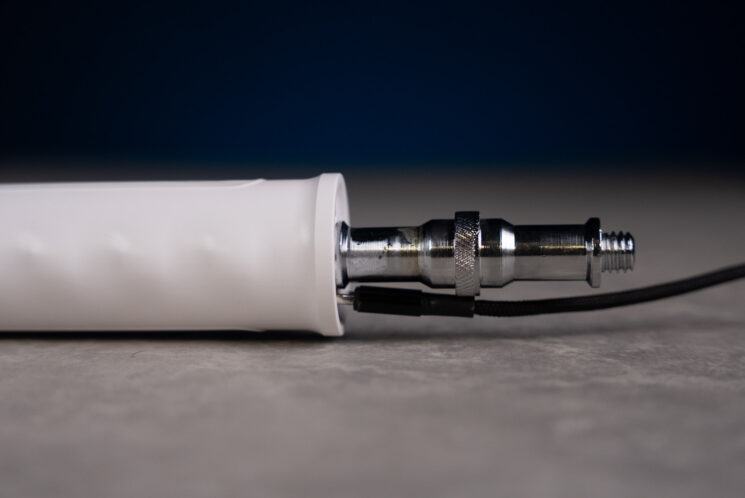 With a thin USBC cable 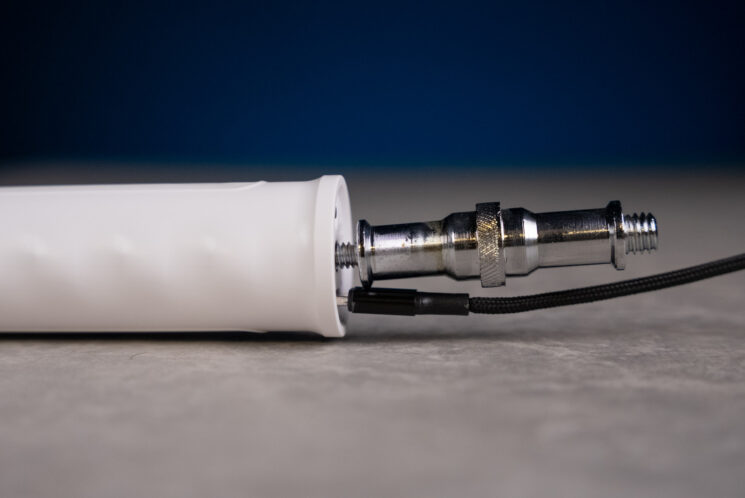 With a thick USBC cable 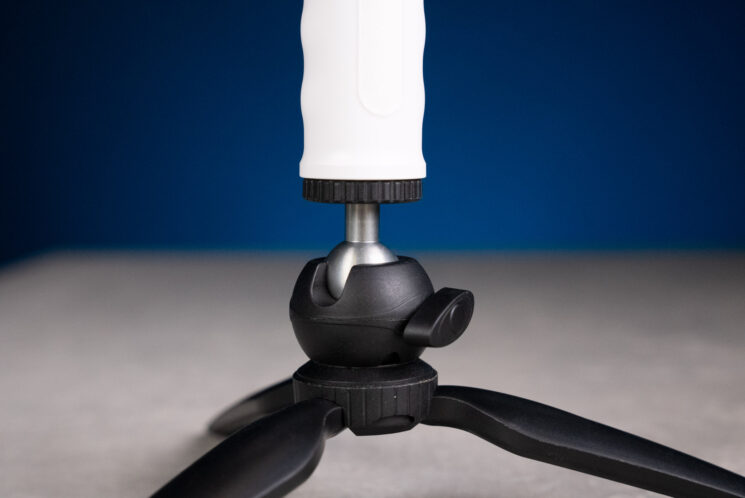 With a locking thread

As usual, we tested the tube lights at about one meter away using a Skonic C700 spectrometer. We’re impressed. We tested or the usual 10%, 25%,50%, 75% and 100% power levels at various color temperatures and only saw minor divinations between the tested light temperature and the claimed light temperature. Really, nothing to write home about.  CRI stated steady above 95 (with a slight dip at 4000K. Again, nothing to write home about).

We saw relatively constant power across colors and constant color when changing the brightness. This means that once you dial in color, you don’t need to worry about color shift when you change the power. And likewise, once you dial in power, it stays constant as you change color temperatures. This is not always the case. 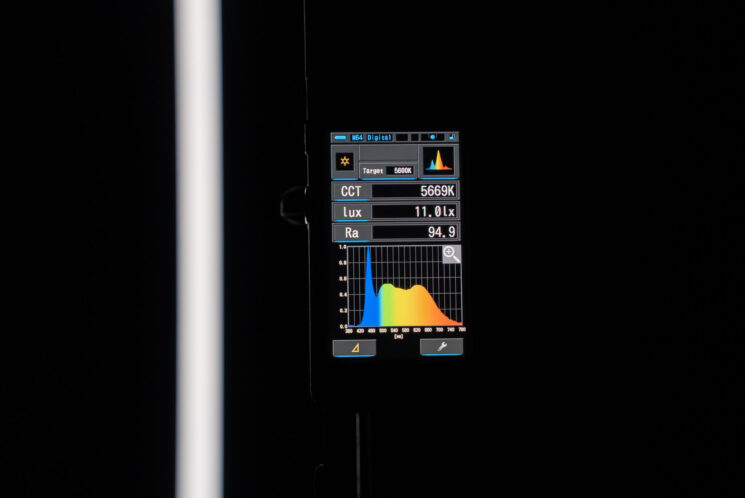 Lastly, while we did not test via instruments, the RGB colors seemed crisp and clean. The pixel effects were fun – those will probably work well for music videos.

The onboard controls on the light are very basic. You get three buttons and an indicator charging light. Those give you some control over the light temperature, RGB gamut, and brightness. Quite expectedly, you can not dial in any value you want but jump in small increments. If you are familiar with KYU-6, it has a very similar control scheme. 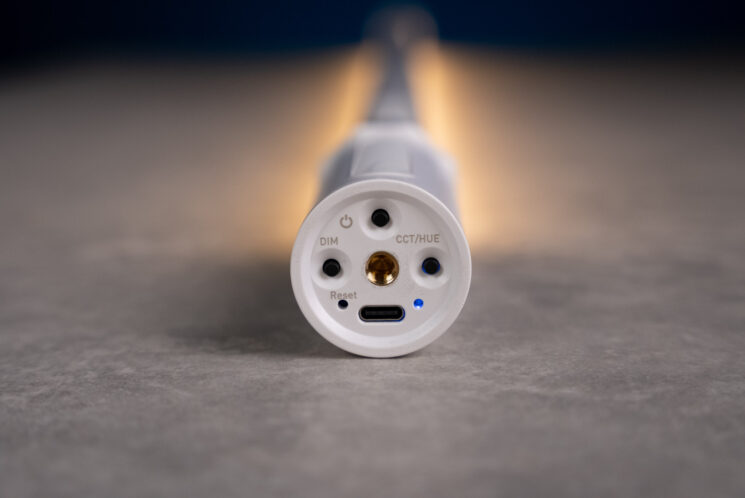 If you need more control or if the buttons are blocked by your mounting solution, you can use the Nanlite App. (Personally, though, the buttons are probably enough for 90% of your use cases).  I am a big fan of the Nanlite app. It has all the control you need, including specific colors and temperatures, effects, grouping, and everything you would expect from a 2022 lighting app.

The app also unlocks some of the pixel “animations” for the tube.

Lastly, the more advanced users can use a DMX accessory or a dedicated remote with an internal battery.

By now, you probably get it. This is a lighter, dimmer light tube. It has limited built in rigging options (one 1/4-20″ thread), but it’s so light that zip-ties are just the perfect companion here.

This will work well to replace a “real” fluorescent fixture, Or anywhere where you have a small hole to tie a knot. You would need a very controlled space to use it as a solo key light, but it is a very clever light for practicals, hair light, and other pops of color.

Here are some of our tests using all four tubes. One for separation, one for background and two for side lights at complementing colors. 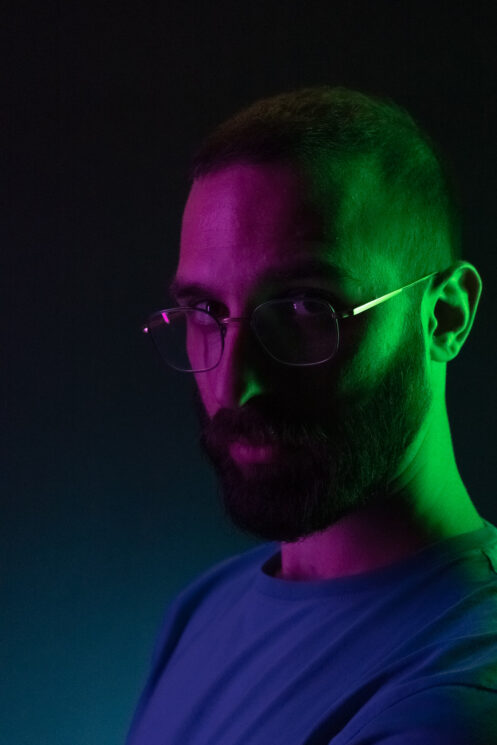 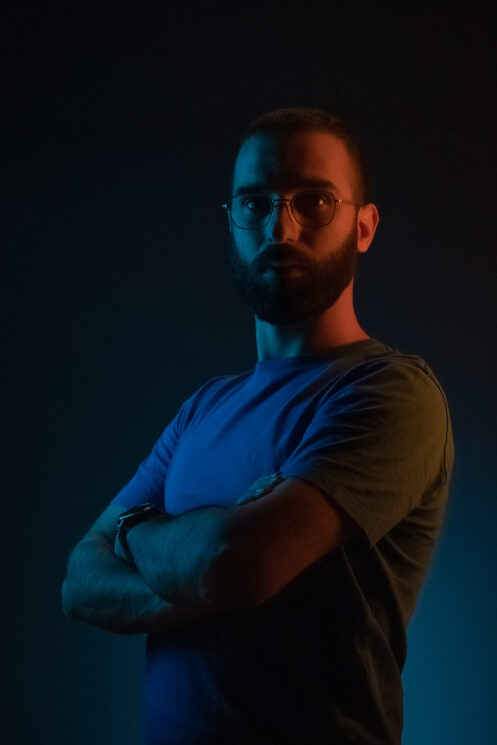 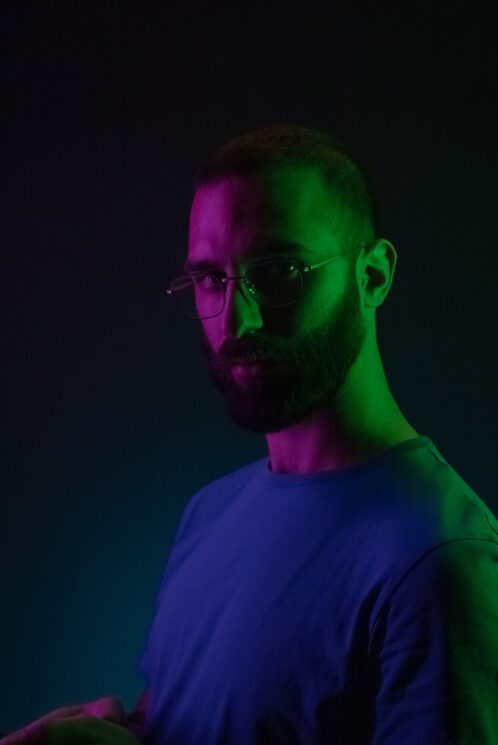