Action lights are strange little things. When I first saw them, when the Lume Cube was announced, I thought they looked pretty useless. A light that small, how powerful can they be, really? Then I got a Litra Torch, and I was rather shocked at just how good these little lights are. Even though I’m not always using it for video, it’s a very handy bright little general purpose utility light, too.

But now the Litra Torch vs Lume Cube battle has a new contender; the Mirfak Moin L1. It’s of a similar size and form factor to the others, but it has a few differences. It’s bicolour and it has a magnetic power connector for charging. The video above is a review of the light from photo & video tech reviewer Scott Dumas.

Looking at how the prices stack up, with the new addition the current lineup of action lights goes a little something like this…

It seems quite favourable in the Moin L1’s direction. But then, you see a similar list when looking at the advertised light output of each of the lights, too.

Note: Some of the lights are listed on their respective websites in Lux while others list in Lumens. The only ones that specify a beam angle are the Lume Cube and Lume Cube Air at 60°, so I’ve assumed that beam angle for all Lux to Lumens conversions. Conversions are noted with an asterisk. This was the calculator used for the conversions.

So, the Moin Lumen number is deceptively large to make it sound more powerful than the competition.  In reality, it has the lowest cost partly because it’s the least powerful – by quite a wide margin. I haven’t tried the Lume Cube or Lume Cube Air personally, but the Torch is only just about powerful enough at 800 Lumen for me, and sometimes not still quite powerful enough. So I’d be worried about going for something substantially lower.

Of course, power isn’t everything. It’s only important if you need it. Depending on what you’re doing with it, you might not need the kind of power that the Litra Torch or full-fat Lume Cube put out. So maybe I’m being a little harsh. Let’s look at the things it does that the others don’t.

So, let’s first talk about how you get power into this thing. The Litra Torch and Lume Cube charge up via USB cable with a standard micro USB socket. The Moin L1 actually has a magnetic power connector. So, you don’t need to fumble around to get it in, or risk damaging those delicate micro USB cables (why hasn’t everybody switched to Type-C yet?). 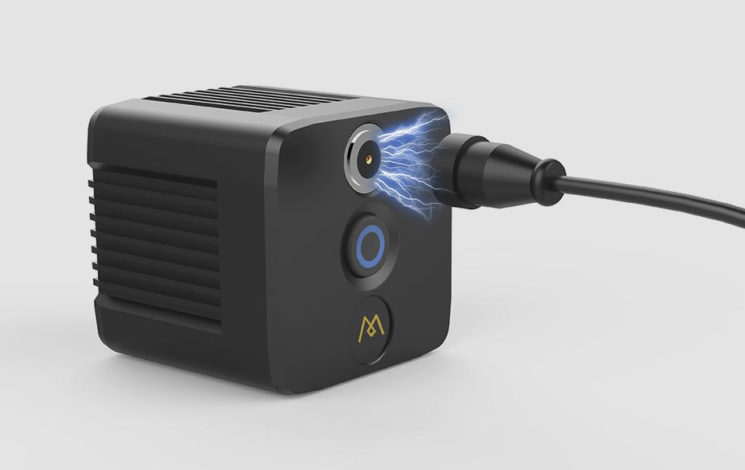 Given that this is a waterproof action camera that can handle work underwater, I do wonder how well that connection might survive in the long term. If it’s regularly used underwater, minerals are going to potentially build up on the metal. Along with the friction from the connector on the cable, it’s possible it could grind it up and eventually lead to corrosion. It’s also possible that it won’t, but Mirfak haven’t released the complete specs for the light yet.

Part of Moin L1’s light output downfall is the low number of LEDs on the front. It only has six small ones. And these are split between a trio of daylight balanced LEDs and a trio of tungsten balanced LEDs. So, when you’re at full power on either end of the spectrum, you’re only lighting up three LEDs. By comparison, the Litra Torch has 8, and they’re all daylight, so they’re all on, all the time. The Lume Cube & Lume Cube Air both just have a giant (relative) COB LED.

But, that does mean you get bicolour. You can transition the Moin L1 from daylight to tungsten with several setting options in between. But their claim of being “one of the brightest of its kind”… Well, there’s only four action lights out there right now. With such a small sample size, it can simultaneously be both “one of the brightest” and also “the dimmest”.

They also claim “A high CRI” on the website, although they don’t state exactly what that CRI is. There’s no complete specs sheet. It’s just a bit of specs here and there throughout the marketing. But it has intelligent wireless control – something currently missing from the Litra Torch (although it is on the Litra Pro), although the Lume Cube does offer wireless control over Bluetooth.

The Moin L1 is waterproof to 10 metres (32.8ft), lasts for 2 hours at 100% brightness and 40 minutes at “150% brightness” (presumably this is when both sets of tungsten and daylight LEDs are both on – so, screw your white balance). It features a magnetic surface for sticking it to various things and has a somewhat unique filter/dome system. 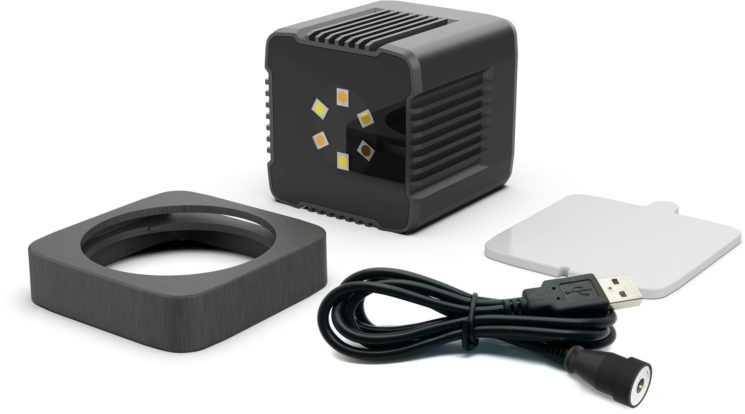 A holder slips over the end of the light, into which you can then place a dome or slip in a filter. Personally, I think if they were going to have a filter holder system anyway, they’d have been better off just having half a dozen daylight balanced LEDs for more power at the daylight temperature (the one you’re probably going to want to use most often anyway) and then have a CTO gel for tungsten. A light that’s twice as bright with a full cut of CTO is going to be the same brightness as half as many tungsten LEDs anyway.

But, with the remote app control, for up to six lights, you can configure them differently right from your phone, so depending on what you’re doing with them, this versatility may be more useful to you than more power.

Personally, I think I’ll stick with the Litra Torch. But I’d still like to try one of these out against it side-by-side to see if the output difference in the real world is as big as it appears on paper.

The Moin L1 is available to buy through the Mirfak website for $59.