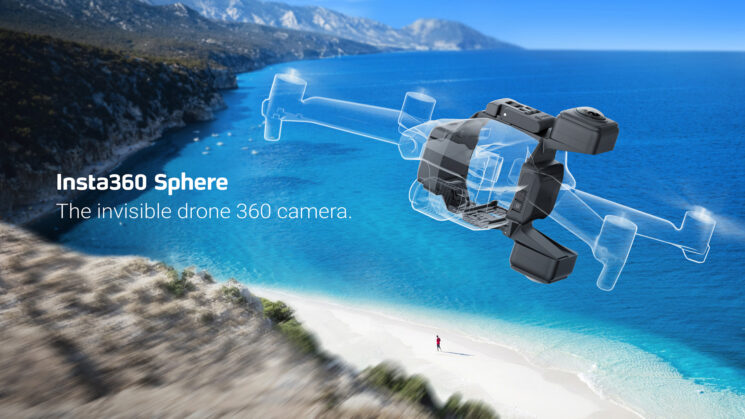 Mounting 360° cameras to drones has been a thing for a while now, but the one big issue with it is that there’s really nowhere you can mount a traditional 360° camera without getting the drone itself in shot somewhere. Well, Insta360 aims to solve that with the new Insta360 Sphere, a split lens system and mount that lets you make your drone completely invisible.

The lightweight frame mounts the two lenses of Insta360 Sphere on top of the drone above its propellers and underneath the drone below its feet. When the two halves are stitched together, you get a completely seamless 360° view with no drone in sight. Initially, it’s been released for the DJI Mavic Air 2 and DJI Air 2S, but it’s expected to come to other drones in the future.

Like the Insta360 ONE X2 and Insta360 RS, the Insta360 Sphere captures 5.7K 360° video that can be edited using the reframing tools in the Insta360 smartphone app and the Insta360 Studio desktop app. The general idea here is to let you get FPV-style footage in the edit, without having to worry about exactly which direction your drone’s pointing at the time of capture. After all, if you can reposition your reframed camera anywhere in post, it doesn’t matter what direction the drone’s facing.

This ability also leads to shots that FPV drones couldn’t really get at all, like pointing straight down or straight up while flying horizontally, with twists and turns that would be extremely difficult (although not impossible with enough skill) to get with an actual FPV drone. And as you can essentially change the virtual focal length from pretty close to all the way out to tiny planet, you can get shots that you’d otherwise never be able to shoot, no matter what drone you’re using or what your skill level may be. 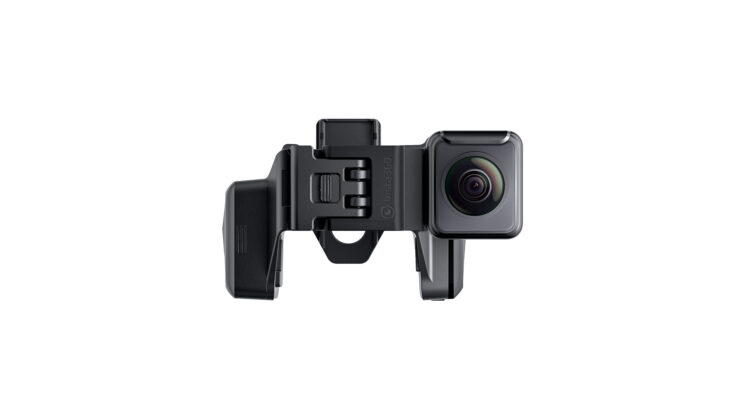 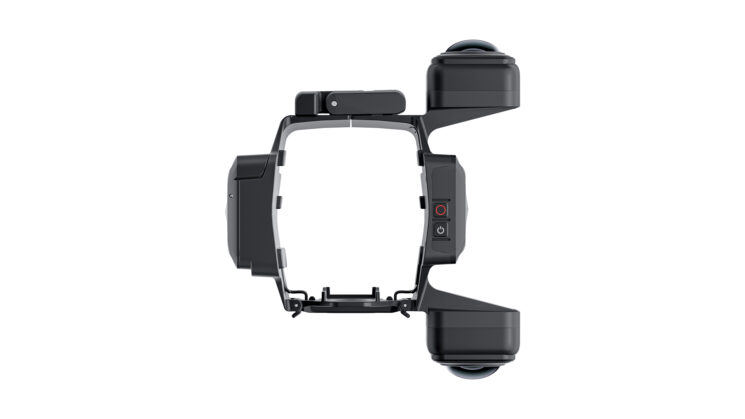 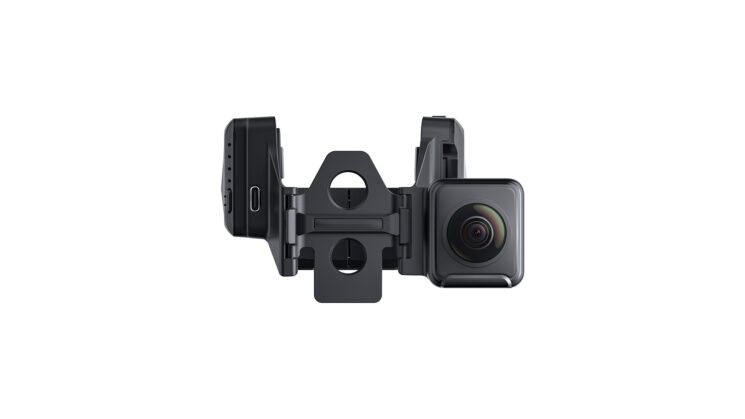 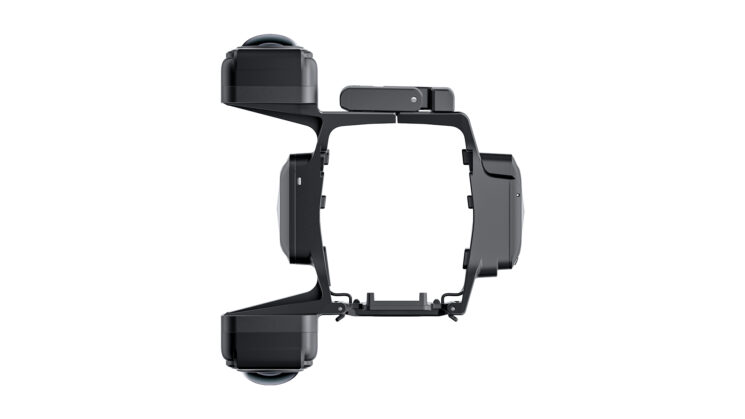 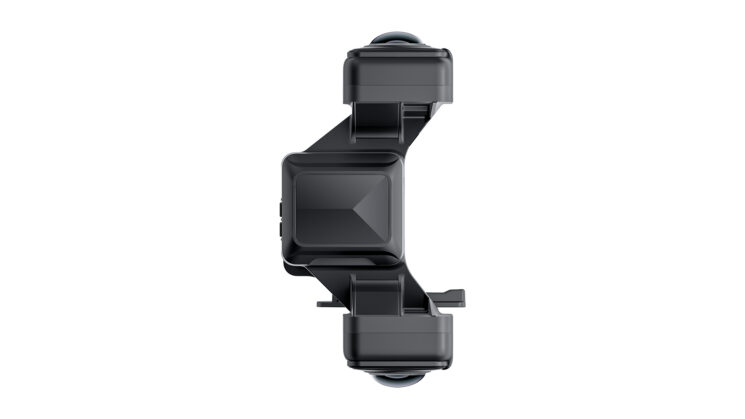 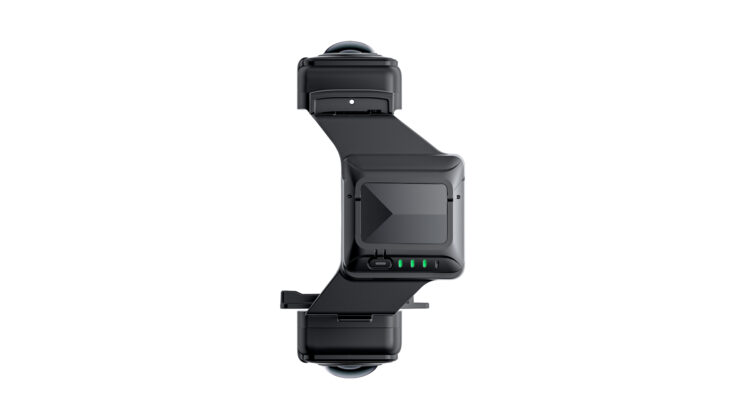 As with Insta360’s other cameras, the Insta360 Sphere can take advantage of Insta360’s FlowState stabilisation technology, which they says has been fine-tuned for the Insta360 Sphere to ensure super steady aerial footage in any conditions. They also say that the frame locks securely to the DJI Air 2/2S drone with no negative impact on the drone’s structural integrity, GPS signal or remote control system.

It shoots 5.7K video at up to 30 frames per second, 4K at up to 50 frames per second, or 3K at up to 100 frames per second, with video in the dual-file INSV format which can be converted over to whatever format you prefer in Insta360 Studio or the smartphone app. It shoots photos at 6080×3040 resolution in Insta360’s INSP format or DNG raw files. For photo modes, you get the standard shooting mode as well as HDR, Interval, Night Shot, Starlapse and Burst. For video, you get standard, HDR, Timelapse, Timeshift, Bullet Time and Loop Recording with Standard, Vivid or LOG colour profiles at up to 100Mbps.

It offers a runtime of 48 minutes (at 5.7K 30fps), so it’ll easily outlast a full battery charge on the DJI Air 2/2S and weighs only 192g with the battery included. Presumably extra batteries will be available for when you want those extended flight times while recording 360°. It’s compatible with iOS mobile devices that contain an A11 or higher chip and iOS 11 or later. Android Devices need to have either a Kirin 980, Snapdragon 845 or Exynos 9810 and newer chip, or a Tensor core chip.

The Insta360 Sphere is available to pre-order now for $429.99 and is expected to start shipping very soon.

« Xiaomi pilfers Leica away from Huawei for new 12 Ultra phone
Stuck in a rut with your portrait compositions? Here’s how to break out of it »