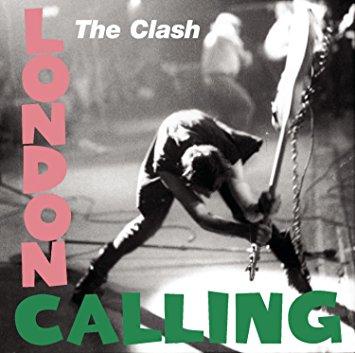 September 21st, 1979. Forty years ago, British rock photographer, Pennie Smith immortalized the destruction of a Fender P-Bass guitar by Paul Simonon of The Clash on the stage of The Palladium in New York City, on gorgeous B&W 35mm film.

Her soft-focus, grainy image with its blown-out highlights and development stains has been dubbed by numerous publications and music fans, “the Greatest Rock ‘n’ Roll Photograph of All-Time.”

Ms. Smith originally considered her masterpiece a throwaway. It was only until Joe Strummer, lead singer of The Clash, was sifting through piles of then-recent prints that he found this buried treasure and gave it its rightful place in history.

The photo was cropped down to a square and became the cover of the band’s breakthrough 1979 album, London Calling. Graphics on the album were made to mimic Elvis Presley’s self-titled record. Within this context, Smith’s photo and The Clash’s music ushered in a powerful revolution that established punk as a legitimate form of both rock and artistic expression.

It was a Friday night in New York City on 9/21/79. British music photographer, Pennie Smith had been following The Clash on their Take the Fifth Tour since the start of the month and would be with them through October. She’d been invited to take a night off and bar-hop with friends but she chose to shoot The Clash’s show at The Palladium instead.

The venue contained fixed seating which forced the audience to remain more or less still and in place throughout The Clash’s high energy performance. Bassist Paul Simonon was growing frustrated with the lack of audience feedback. It was a regular part of his performance to swing his low-slung Fender Precision bass around by its strap as he played. But by the final song, White Riot, Simonon’s anger boiled over.

Smith reflected, “I remember thinking something was wrong, realizing Paul was going to crack… and waited.”

Pennie lifted her Pentax ESII to her eye, set the focus and aperture on its screw mount Takumar lens. Simonon took his instrument by the neck and swung its heavy body like an ax into the air above him. At this fractional moment with the Fender’s body raised to it’s highest point before its final drive to the floor, Smith snapped the electronically timed cloth shutter, exposing Kodak Tri-X 35mm film to the contrasty light of this epic moment. 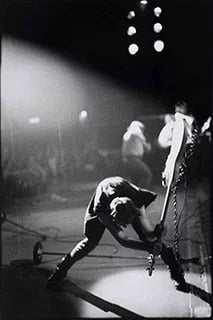 Simonon brought the bass guitar crashing down onto the hard stage floor, splintering its neck, parting the frets and cracking the solid-body electric all the way through, straight down its center. The tension on the strings, fully released, held together the remains of the instrument loosely.

“The shot is out of focus because I ducked — he was closer than it looks,” Smith recalled.

The greatest rock ‘n roll photograph of all time does not adhere to the slick, glassy, grainless commercial conventions of today. In fact, it plainly recommends they f**k off.

You can’t see anyone’s face. The subject is almost unidentifiable.

Highlights are blown stops beyond recovery. Irrelevant background elements compete with the subject for the brightest part of the image, and therefore, to what the eye is drawn.

Nothing’s even sharp! Nothing. The subject is the most in-focus part of the image but is far from sharp, clear or crisp.

Details are obliterated by grain and the soft focus and/or camera shake.

Perhaps the most egregious offense of all is the long vertical hard water stain snaking its way up nearly the entire left side of the frame. This shoddy development artifact is accompanied by a few other less prominent but visible bits of evidence of the handcrafted nature of the image.
This is simply inappropriate for proper rock photography!

But what the image does, in its complete disregard for fine detail, resolution, smooth tonality or clean processing, is transform this moment into the basic elements of design; form, line, space, and shape.

Simonon is not just a person. He’s an equilateral triangle! A triangle within the narrow end of a quadrilateral which is formed by the perimeter of the photograph and the beam of stage light that cradles Simonon. The intersection of the neck of the bass with Simonon’s hands creates a weighty, anchor point in the geometry of the image. This anchor drags the action and motion of the scene down into the lower third corner.

The other anchor point is the intersection of the guitar’s body and the line of the stage light. Here, mass is given a precise coordinate. All the big negative space behind and above Simonon is a cantilever that both balances the frame as well as provides gravity while the two anchors map the direction of movement. This alignment of math and moment gives the viewer a sense of the real weight of that bass guitar, and all the anger inside it, about to come down. 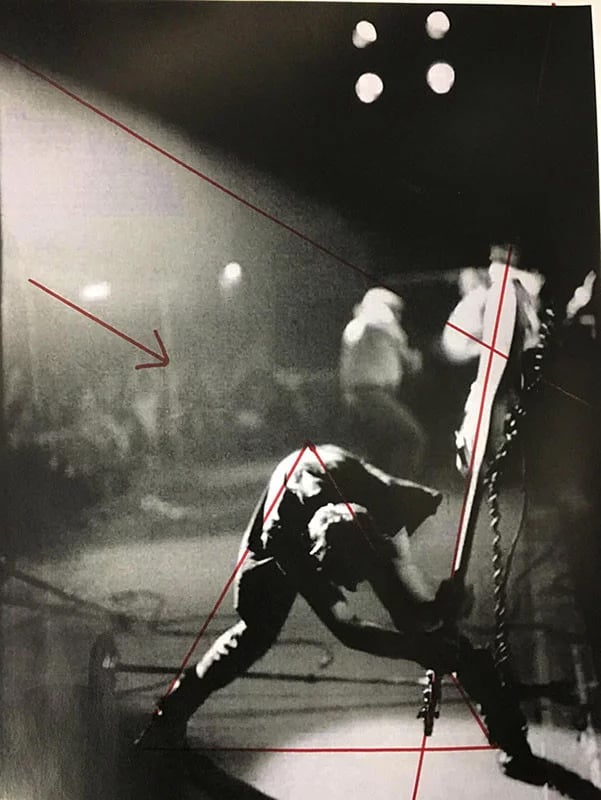 A ruler and red ink can highlight the geometry at work. Photo by Pennie Smith

What’s more is that cluster of circular stage lights that punctuate the upper portion of the photograph. Imagine if they weren’t there. The image would still be fantastic. But with the lights, Simonon’s body has an echo in negative. Simonon is mostly black on a mostly grey background while the stage light cluster is white on a black background within another polygon. One can almost see a complete yin-yang in this interplay.

“Yin and Yang… ‘dark-bright’, ‘negative-positive’ is a concept of dualism in ancient Chinese philosophy, describing how seemingly opposite or contrary forces may actually be complementary, interconnected, and interdependent in the natural world.”

Let that soak in for a while.

There’s just so much going on in this grainy, dirty, out of focus black and white photograph that I seem to get more out of it from each viewing. It amazes me that people still chase after these sterile, grainless live music photos when something like this exists to prove it all rather pointless.

What I get out of all this is that like in punk rock music, equipment and precise technique are far less important than artistic sensibility and vision. High-quality equipment is cool. And honing one’s skill is of course critical. But we also must know when to throw these things to the wind and see how they scatter. And not get so lost in technical perfection that we forget what our hear sees. Follow instincts, gut reactions, go with what feels right.

Okay, well, that’s enough of that hippy s**t. Happy 40th anniversary to the famous Paul Simonon bass smash photo. And to The Clash’s London Calling. Thanks for reading and thank you Pennie Smith, for showing up with your Pentax and your Tri-X and ambition and giving us something to consider.

Johnny Martyr is a premier East Coast film photographer. After an adventurous 15 year photographic journey he now shoots exclusively on b&w 35mm film that he painstakingly hand-processes & digitizes. Choosing to work with only a select few clients per annum, Martyr’s uncommonly personalized process ensures unsurpassed quality as well as stylish, natural & timeless imagery that will endure for decades. You can check Martyr’s work on his website and Flickr stream, and also follow him on his Facebook page.