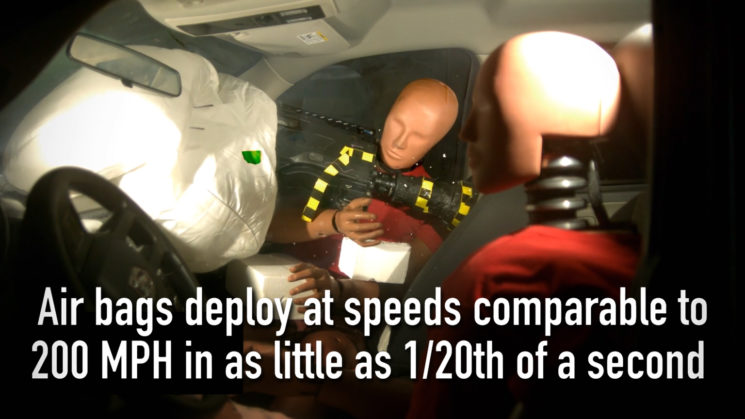 Filming from moving vehicles has been happening for as long as movies and vehicles have existed. But with the rise of movies such as the Fast & Furious series, it’s becoming more common. Not just in Hollywood, but amongst new filmmakers and even vloggers. And if they’re using something larger than a phone, they’ll usually have a second person in the passenger seat filming.

But what happens to the passenger in the event of a crash when the airbag is deployed? That was the question asked by the International Alliance of Theatrical Stage Employees (IATSE). It was put to the test and answered by Dr Cynthia Bir at the University of Southern California, and the results are pretty devastating. It’s not just the camera guy that’s put at huge risk, but the driver, too.

The term for such an activity is Free Driving. Defined as “Handheld filming in an in-towed vehicle, driven by an actor or other individual”, it’s quite common, but one needs to understand the risks. Not just to the camera operator, but to anybody else inside the vehicle.

There are several positions typically used by camera operators inside vehicles. One is with the camera op reversed on the seat, leaning back against the dash, directly onto the airbag. This test illustrates how the camera travels straight toward the driver’s head on impact. With a

To give you an example of how much force this could be, Sharp’s new 8K camera weights approximately 5kg (11lbs). At 6.97G, that’s like a 35kg (77lbs) solid lump with sharp bits sticking out hitting the driver straight in the head. Even with relatively lightweight, DSLRs, once you add in a lens, cage, microphone, and all the other bits, you could easily be holding a 3kg (6.6lbs) rig that would hit around 21kg (46lbs).

The passenger side airbag is physically larger and deploys with more force than the driver side airbag which is situated farther away from the occupant.

With a side-on position capturing the driver in profile, the camera guy is definitely the worse off. Here the peak force is almost 11G. The camera hits his head twice before he’s even impacted the seat. Then it hits a third time for good measure. The camera guy would almost certainly be dead from the trauma. If not, they’d at least be in very bad shape.

Some vehicles will allow you to disable the passenger airbag. This came when it was understood that airbags weren’t so great for child seats in the front of a car, either. More modern cars don’t allow this. Instead they “detect” whether a child or car seat is in the passenger seat, and respond accordingly. Not so easy with a fully grown camera op.

It’s not just the cameraman that’s at risk. It’s anybody in the car.

So, some things to think about the next time you’re planning to shoot video in a moving vehicle. And, if in doubt, you can always green screen it in a stationary car.