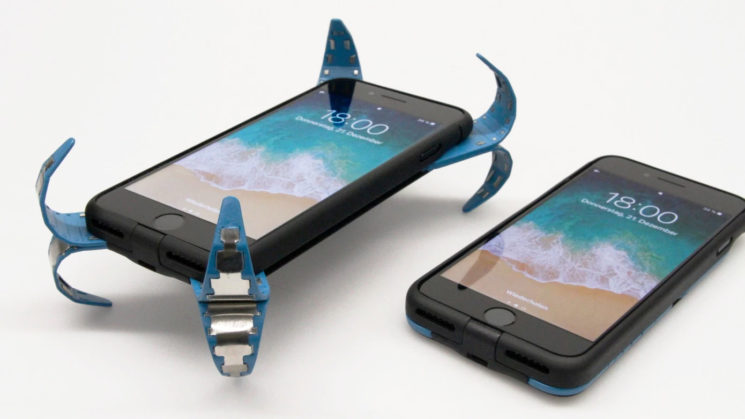 If it’s not parachutes for drones it’s airbags for phones. Humanity seems obsessed with things falling or being dropped these days. While we hope that drones falling from the sky doesn’t happen often, phones fall and get damaged all the time. Especially when scrambling around at a location trying to shoot photos with them.

German engineering student Philip Frenzel, though, thinks he’s come up with a design to solve the problem. It’s a “mobile airbag” of sorts, designed to save the day before your phone hits the ground. Built into a case, it detects when your phone is falling and then springs into action pushing out four double-sided “legs” to impact the ground before your phone does.

I can’t speak German, but the bits I could pick out, along with the visuals, looks like a pretty cool idea. The German Society for Mechatronics seems to agree as Philip’s idea won their top award.

The design appears largely 3D printed at the moment, in these early stages, with some metal springs to help reinforce the mechanism. Some drop tests shown in the video look very effective, too. I wouldn’t want this thing accidentally going off inside my pocket if I slip or fall, though. That could get painful.

TechCrunch reports that Philip has already applied for a patent and has even printed t-shirts with a fancy logo. So, it looks like commercialising the product is on the way. I suppose we should keep an eye out on Kickstarter.

Hopefully, though, if that happens, these will be available for more than just iPhones. If not, I’m sure somebody out there will completely ignore the patent and manufacture cheap clones anyway. That seems to be the way these days.