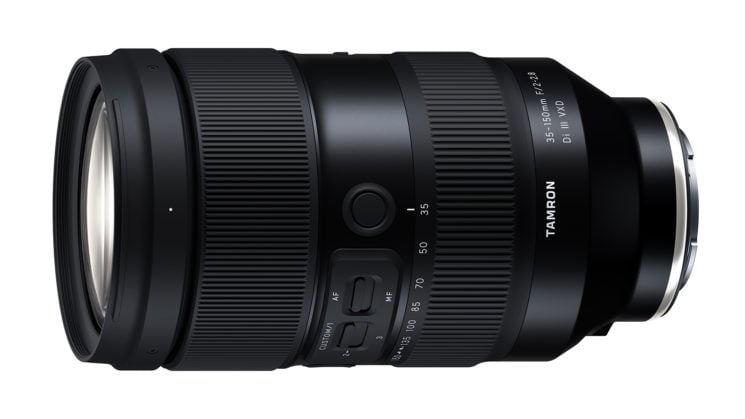 It looks like Tamron is taking a leaf out of Sony’s book, claiming records with hidden caveats. First, we had Sony claiming that the A7c was the world’s “smallest and lightest full-frame camera” – which it objectively wasn’t – and then Sony started adding caveats to the claim. Now, Tamron’s doing it with, perhaps not surprisingly, their new Sony E mount 35-150mm f/2-2.8 Di III VXD.

They’re claiming that it’s the “World’s first mirrorless zoom lens with a maximum wide-open aperture of f/2”. And on the surface, the claim is obviously nonsense, because Canon’s got the RF 28-70mm f/2L USM lens, and Panasonic has the 10-25mm f/1.7 and a new 25-50mm f/1.7 zoom on the way. So, yeah, even the manufacturers are clickbaiting these days.

Obviously, the claim comes with a caveat, hidden down at the bottom of the press release stating…

¹ Among the zoom lenses for Sony E-mount full-frame mirrorless cameras (As of July 2021: TAMRON)

All we know right now is that it’ll have a 35-150mm focal length with a variable maximum aperture going from f/2 at the short end to f/2.8 at the long end. It’s compatible with the new Tamron Lens Utility software to tweak the functions and update firmware directly from your computer and that’s pretty much it so far.

Well, that and it won’t actually be the world’s first mirrorless zoom lens with a maximum wide-open aperture of f/2.

According to Tamron, the software will provide some neat customisation features for the lens, though, including…

I’m sure that when it’s announced for release (and there’s no word on when that may happen) it’ll be at least as good as any other lens Tamron makes, and I’m also sure that within a few days of actually announcing its release, they’ll send out a press release stating that they “underestimated demand” and that there will be shipping delays.

By that time, there might be other f/2 zooms out there for E mount, too. Surely, Sigma’s 24-35mm f/2 is due for a mirrorless refresh soon to bring it to the L mount – which also means it’d be coming to E mount?

Companies really need to quit going for clickbait caveated press releases. They really don’t impress anybody. You know what impresses people? A company announcing a good product and it actually being available to buy at retailers without a six-month wait.