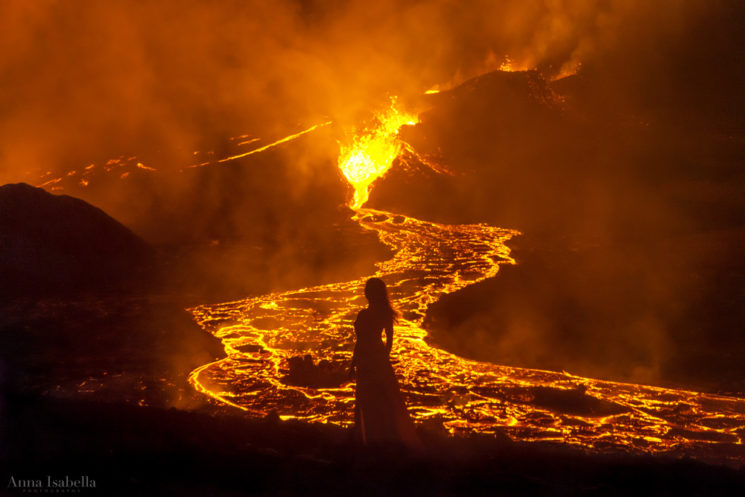 In March this year, the Fagradalsfjall volcano near Reykjavik, Iceland erupted, creating the first eruption in the area after 800 years. It attracted many spectators, and some of them captured the power and beauty of the eruption. One of them is photographer Anna Isabella Christensen. She took a slightly different approach and instead of just shooting the volcano – she took some magnificent self-portraits in front of it.

Anna Isabella loves traveling and spending time in nature. In late January 2021, she first arrived in Iceland. The earthquakes started on the Reykjanes peninsula near Reykjavik in February, and on 19 March, the volcano erupted. “It was a small eruption so the area was open to the public,” she explains, “and thousands of people started hiking there every day to see the volcano.”

The photographer stayed in the area three times with some breaks in between. But she hiked to the volcano as many as 25 times to create this series of self-portraits. It’s worth noting that she took the necessary safety precautions. First of all, the location is deemed safe by the Icelandic authorities and it’s open to the public. When taking her self-portraits, Anna Isabella kept a safe distance, and measured gas levels, and considered the wind direction before each shoot. 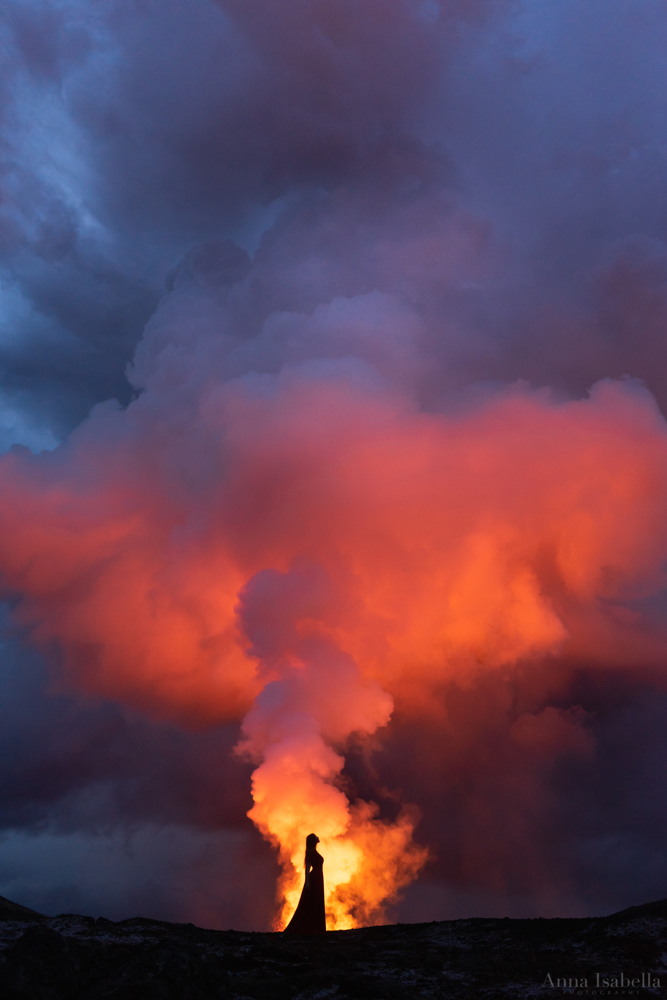 “The conditions at the volcano were quite extreme a lot of the time and it was very, very cold,” Anna Isabella explains. “I experienced all kinds of weather there – snowstorms, hail, rain, extreme wind, I even got caught up in a small dust devil once, [and] one time there was ashfall coming down.” These extreme conditions and the cold sometimes made it impossible to do her shoots. A few of her hikes only resulted in finding out that the weather was too extreme, so she would have to go back to the hotel. Still, the patience and persistence paid off and Anna Isabella ended up with some great shots.

“My idea was to capture the connection between a human being and an erupting volcano and show my fascination and admiration,” Anna Isabella says. “I thought that my red dress would be a good fit for the fire energy of the volcano.” She took all photos by putting her camera on a tripod and using her phone as a remote control, which also enabled her to see what she was doing. Since the phone would sometimes keep disconnecting, she used the timelapse feature instead. 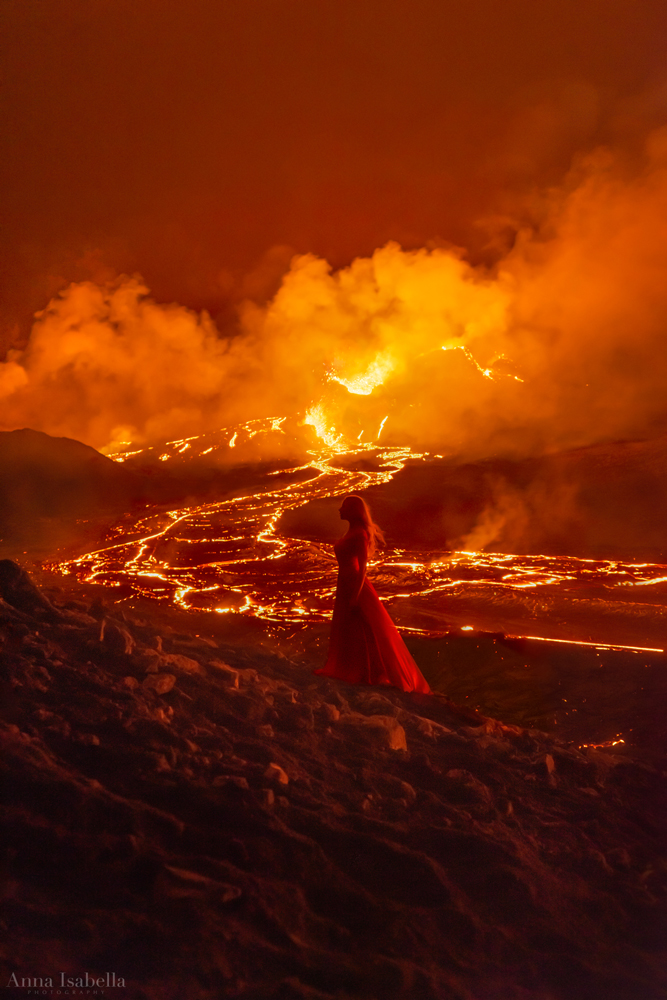 One would say that shoots like these required a lot of planning. Well, it sure would be helpful, but there was so much that Anna Isabella couldn’t foresee. “The eruption was changing every day and it was hard for me to do much planning,” she explains. Also, she could never know how many people it would be there at which part of the day, as well as what the weather conditions would be like.

“I was fascinated by seeing the volcano at sunrise/sunset, blue hour and in the dark, as the lava was glowing during those times,” she explains.

“I ended up hiking there at night and staying until sunrise because there were huge crowds of people there at any other time. I really prefer to be alone during my photo shoots and also I wouldn’t be able to find a place there without other people in my frame. It was also an incredible feeling to witness the volcano when there were only a few other people there and it was so quiet.”

Since she was only able to do one photo shoot per visit, what she did plan was implementing some of her ideas for the following shoots. It worked out for some of the photos, but most of them were just ideas that she got upon arriving at the eruption site, depending on how it looked that night. Still, she ended up with some stunning self-portraits, and she sure will have some awesome stories and photos from her trip to Iceland! 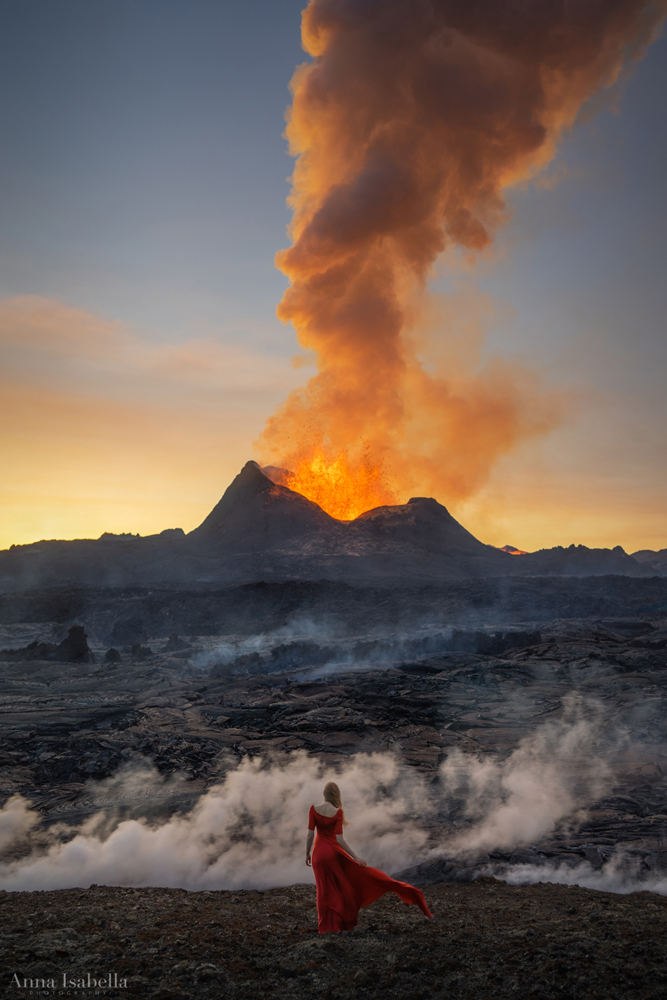 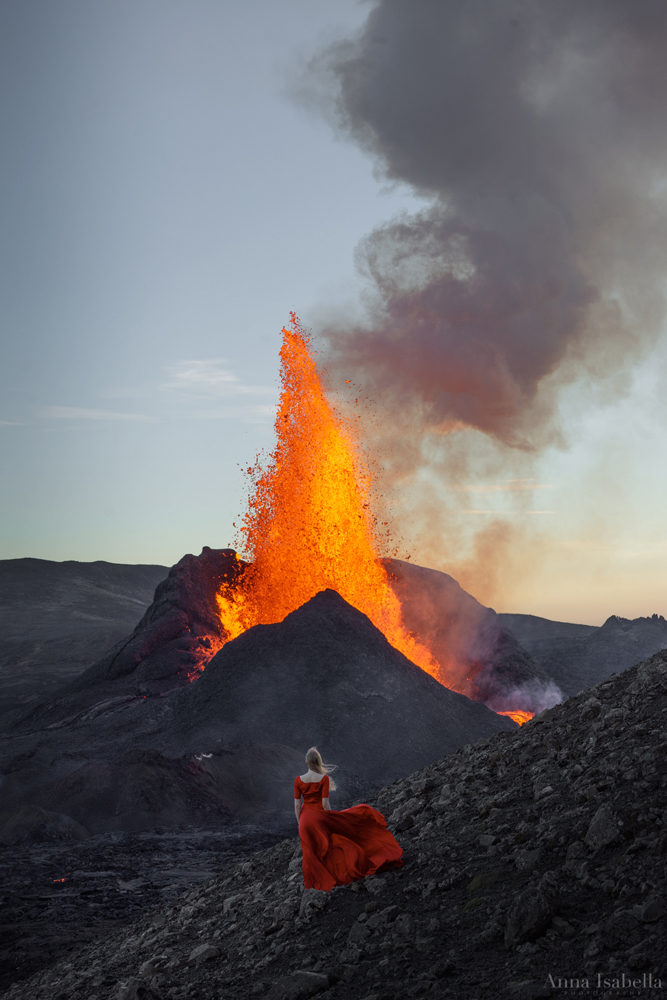 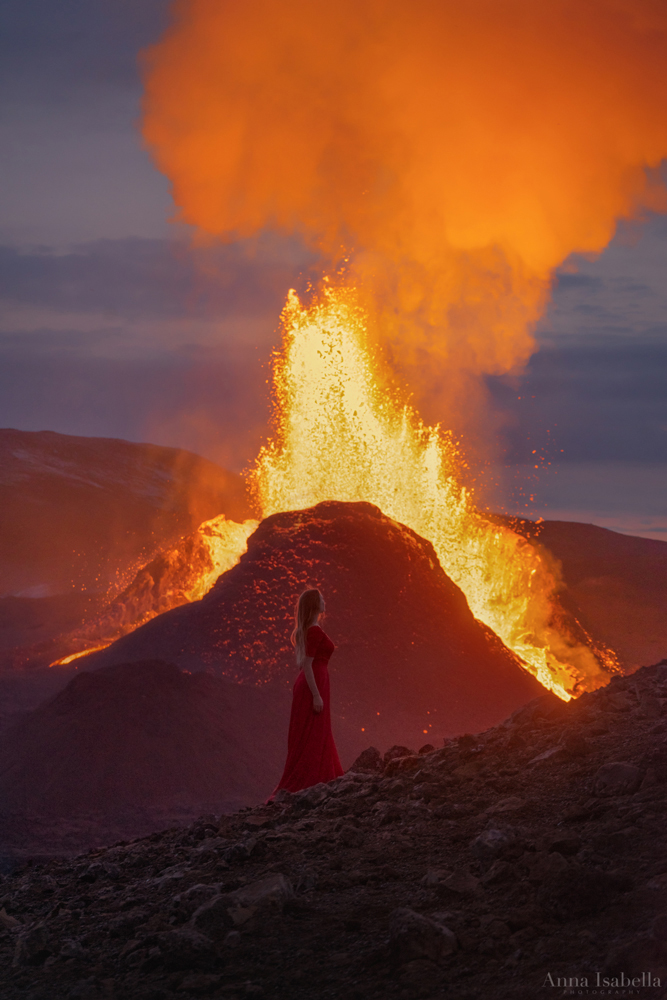 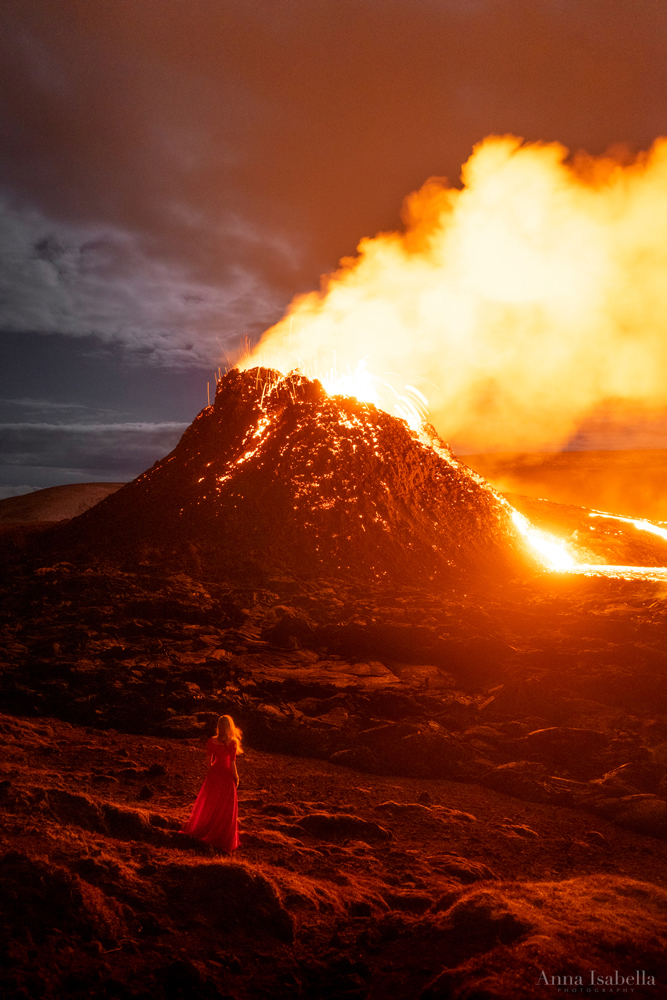 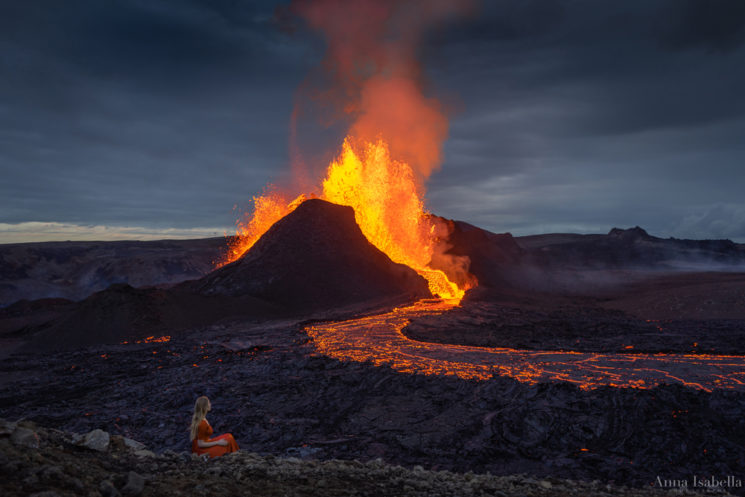 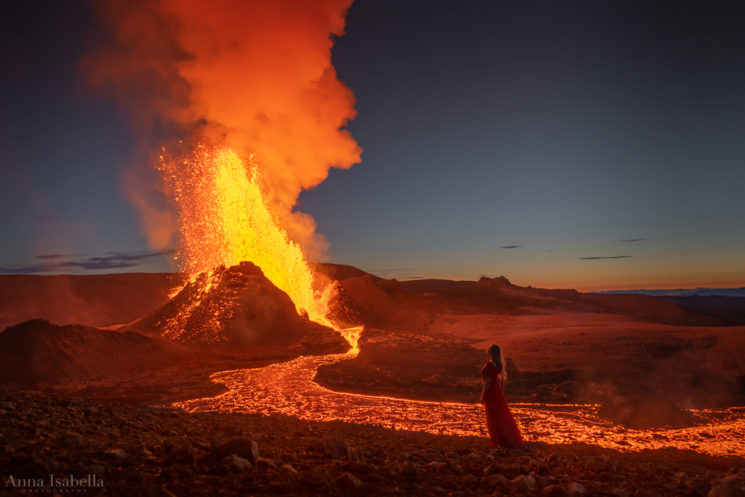 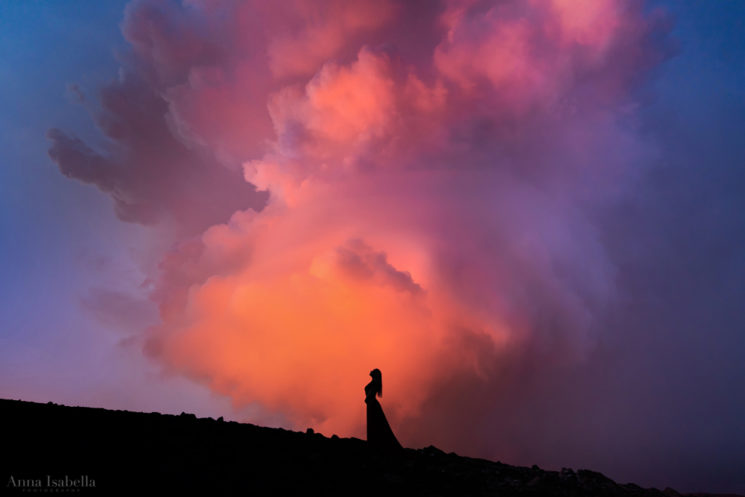 Awe Inspiring Photographs Taken At The End Of The World

« Tamron claims “world’s first” f/2 max aperture mirrorless zoom with the new 35-150mm f/2-2.8
All you need to know to start using NFT as a photographer »