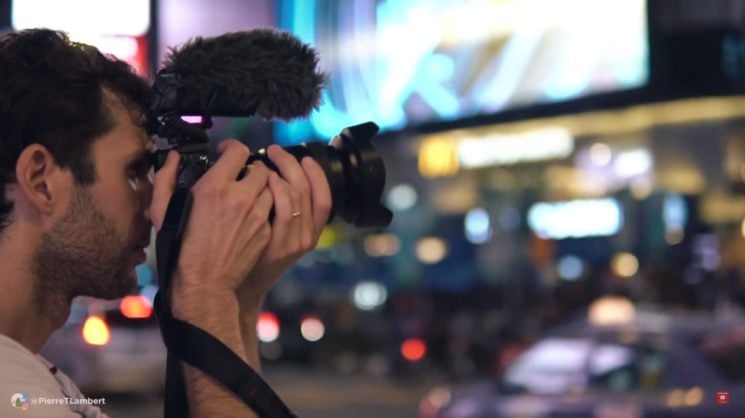 Night street photography presents a lot of technical challenges that some photographers avoid it altogether. However, that doesn’t mean you shouldn’t push yourself and try it at all. Remember that anything is possible with the right mindset… and the correct settings. In this Pierre T. Lambert‘s latest video, he shows you a few tips to increase your chances of getting killer street shots at night.

In the video, Lambert shares that the most critical piece of equipment you need to have is the lens. When you’re shooting at night, you need to have the right glass that performs well in dimly-lit situations. He suggests having a prime lens that has an aperture size between f/1.2 to f/2.8. Having a large aperture allows the lens to let as much light in as possible. That way, you don’t have to increase the ISO and get noisy images.

Since Lambert does night photography, you’d think he brings a large tripod all the time. But apparently, he only carries a small GorillaPod with him all the time. He says that it’s all he needs most of the time to take photos at night. After all, it’s small, and he can quickly set it on any flat surface or even a backpack. Of course, the French photographer uses a full-size tripod as well, but he admits he only does so when he absolutely needs it.

To capture night scenes, Lambert uses either Aperture Priority or Manual depending on the situation. He shares that he often uses Manual set to 5 to 30 seconds of exposure to capture light trails. For regular street shots, he suggests using 1/125th of a second to freeze movement or lesser if the subject is still. The aperture size should also be between f/1.4 to f/2.8 to let in more light and produce creamy bokeh. As for ISO, he suggests to keep it low to avoid grainy photos. He didn’t discuss any particular values. However, he mentioned in his other video that he doesn’t typically go beyond ISO1600.

Lambert says you should look for streets with lots of ambient light. Of course, the more lights there are, the easier your camera can capture a scene. He adds that neon lights and post-rain reflections look particularly good in photos. On top of that, he shares that you should also play around with bokeh. Since you’re using a very wide aperture, you have more chances to shoot blurry backgrounds with beautiful floating orbs that look heavenly.

These tips he mentioned are useful. But perhaps the most insightful of all is this: “99 percent of your shots might be crap, but go for the one percent. Really go for it.”

So what are you waiting for?

7 tips to take your architectural photography to the next level