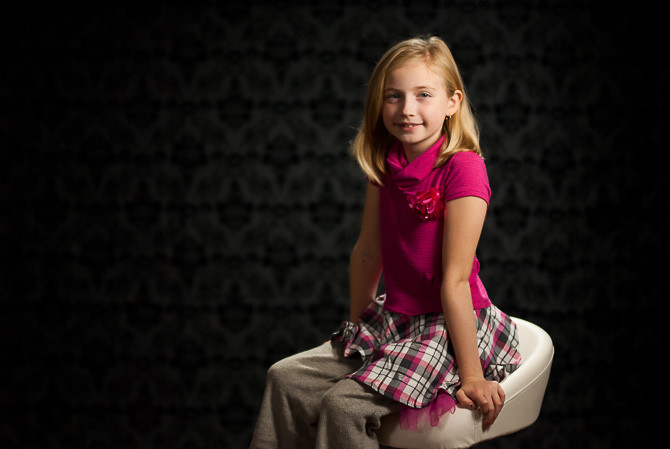 When I was getting started with photography, I knew that I had to learn how to light a subject indoors, but I couldn’t afford studio strobes – or even a hot shoe flash.

I ended up learning how to use artificial light by re-purposing a set of three 500 watt halogen work lights.  They turned a room into a sauna, constantly blew fuses and occasionally melted down my DIY light mods, but they taught me how to visualize light.

So when I was putting together my second studio lighting class at Skillshare, I though that it would be fun to return to my roots and photograph a classic three light studio portrait using hardware store LED light bulbs.

In this article I will show you how its done.

Let’s start with our LED light bulbs.  I previously wrote about DIY Video Lighting With Hardware Store LED Light Bulbs here and I used the same bulbs for this three light portrait.

For the lighting setup, I used three lights: a key light, a fill light and a hair / rim / background light.

Here is an overview of the entire setup. 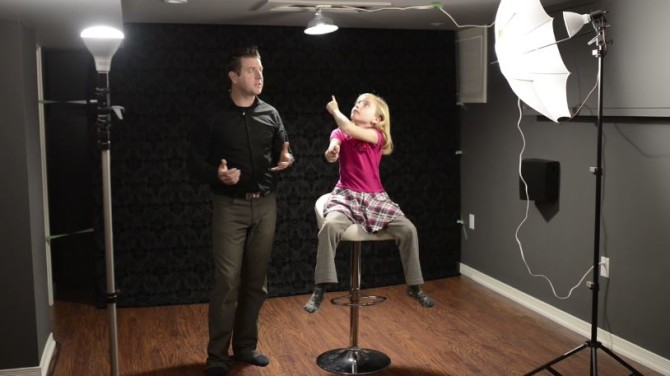 The key light is a PAR 38, 17 watt LED spotlight ($37.99 from Amazon), daylight balanced to 5000 kelvin and rated at 1250 lumens.  This particular LED is a high CRI bulb (more on that shortly). I simply wired a light socket to the top of an umbrella holder that was supported by a light stand.

Because this LED bulb has a fairly compact beam angel of 40 degrees, I used a white shoot through umbrella as my key light modifier. 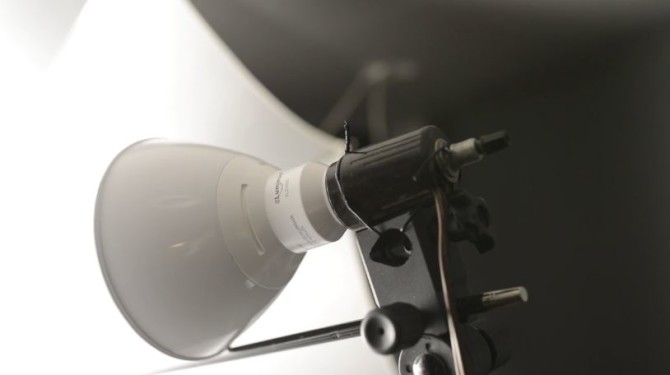 The fill light is a BR40, 17 watt LED spotlight ($26.99 from Amazon), daylight balanced to 5000 kelvin and rated at 1400 lumens.  Again, I just used a bare light socket inserted into the top of an umbrella holder that was supported by a light stand.

This bulb has a wide 110 degree angle beam spread, so instead of using a light modifier I aimed it straight up to reflect off of the ceiling to provide a relatively soft room fill. 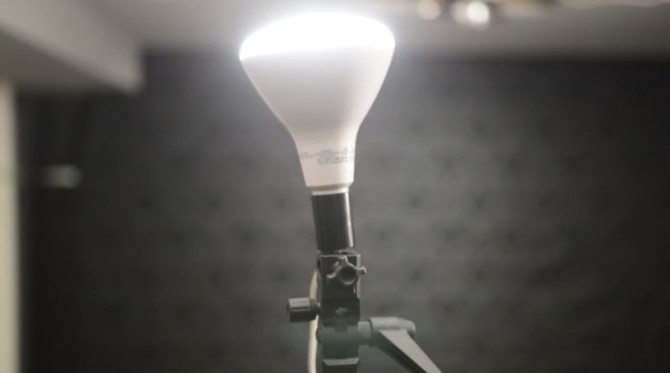 The overhead back light is doing double duty as both a hair light and a background light.  The hair / background light is an A21 format 17 watt LED omni-directional bulb ($29.99 from Amazon), daylight balanced to 5000 kelvin and rated at 1600 lumens.  To mount this light overhead, I used an aluminum work light clamp ($8.50 from Amazon). 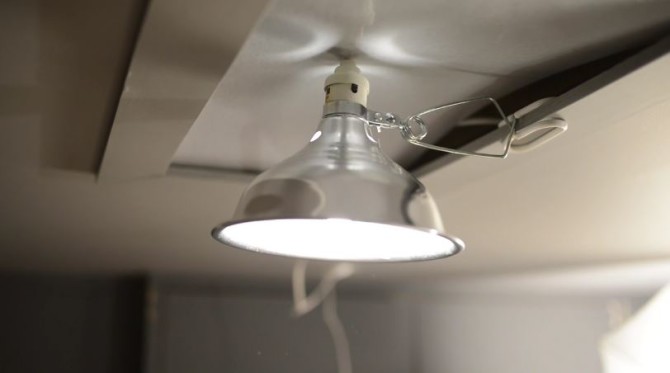 I used a DSLR for my hardware store LED light bulb three light portrait, but because we are using a constant light source (hot lights), any camera would work fine (including a mobile phone camera).

I also used a Sigma ART 50mm f/1.4 lens.  (One of the big advantages of using constant lights is that because they are much less bright than strobes, you can use fast lenses and shoot wide open for maximum bokeh.)  But again, almost any lens would work for this setup – even a standard 18-55mm f/3.5-5.6 kit lens.

However, if you are taking a portrait, a zoom lens with a longer focal length will produce less lens distortion – and if you are zooming in on a kit lens you might have to use a high ISO setting to compensate for the relatively small f/5.6 aperture.

In my case, I set my camera to:

Equivalent settings for different lens apertures would be as follows:

All of the LED light bulbs that I used were rated to daylight at 5000 Kelvin – so I set my camera’s white balance mode to Kelvin and set the color temperature to match (5000K). 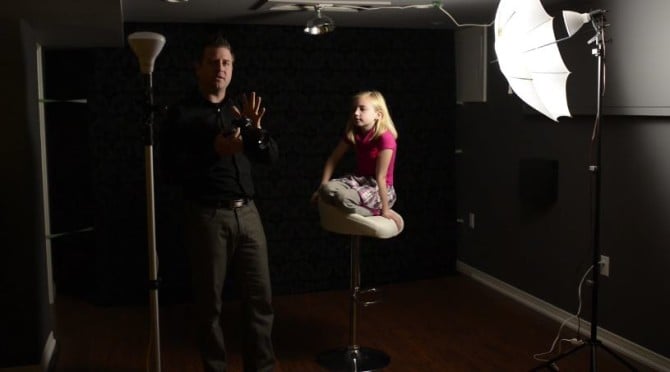 Next, set the power of your fill light.  LED lights can be dimmed with a dimmer – but in my case I didn’t have one available, so to control the power of my fill light relative to the key light I moved the light physically closer or further away until I got the amount of fill that I wanted – just slightly underexposed. 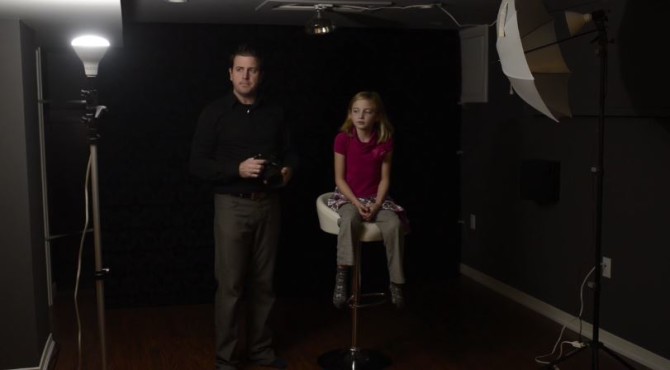 And finally, I set the power of the hair / background light.  I couldn’t move this light closer or further away, but I could control the intensity of the light by carefully angling the beam to just barely catch the back of my model.  Alternatively, I could have used a dimmer or placed a piece of tissue paper or other diffusor over the light to cut down the relative brightness. 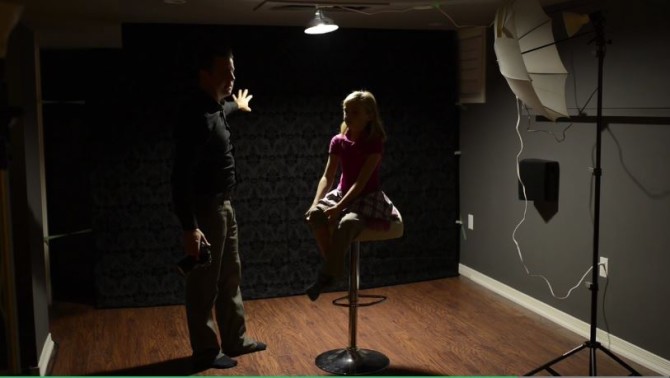 With the lights and camera all set, here is what the finished three light studio portraits looked like – using only hardware store LED light bulbs: 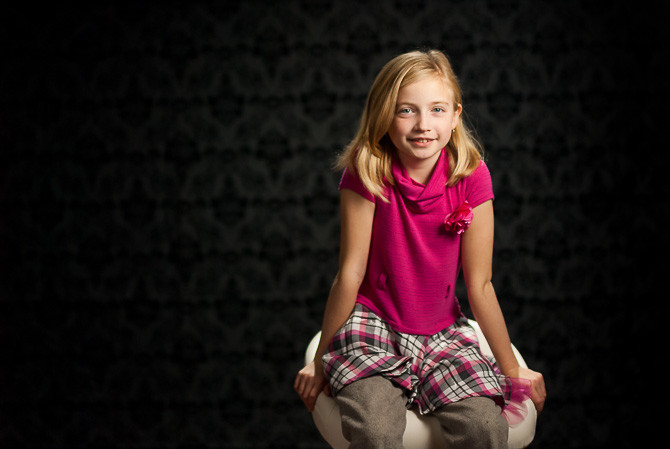 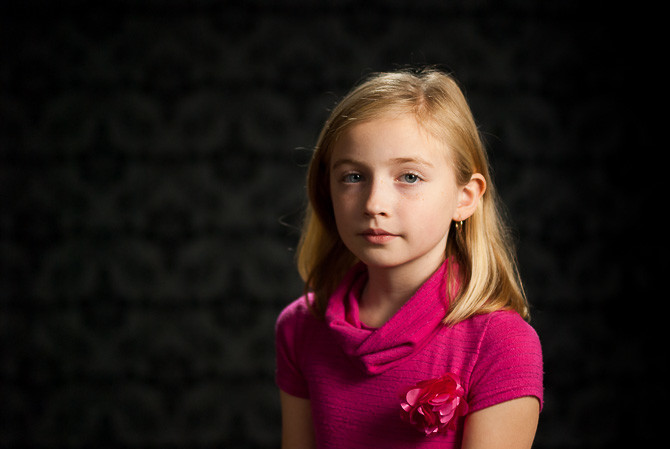 A Note About CRI for LED Light Bulbs

The only LED bulb in this setup that is a high CRI (color rendition index) bulb is the key light.  I specifically set this bulb as my key light because I knew that it would produce the best colors in the finished photos.

The high CRI bulb produces a nice rich color palate – as you would expect.  However, the colors produced by the standard LED bulbs are noticeably muted and dull, which is especially noticeable in the skin tones.

Here are two other articles that better explain the importance of CRI when using LED light bulbs for photography and video:

“Not All LED Panels are Made Equal. Here’s How To Tell The Difference”

“Cheap LED Lights: What is CRI and Does It Matter”

Or, if you miss the free enrollment, don’t worry – you can also get a free month of Skillshare premium classes that includes access to this class and other photography classes on Skillshare – just click here.

And if you are interested to learn how to take a one light studio portrait, there are still a few free enrollments available for that class – click here.