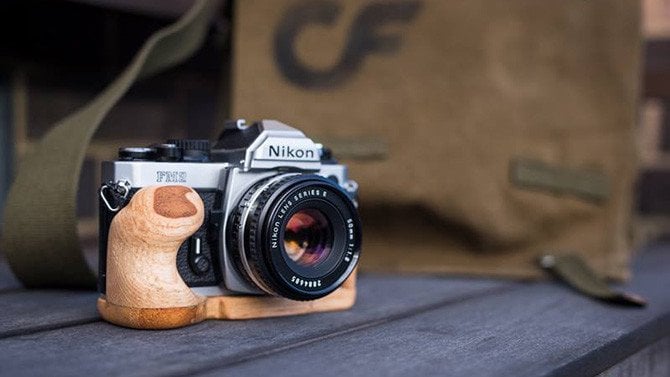 Despite being principal photographer for Jaguar World, Classics Monthly, Retro Cars and a number of other popular British car magazines, Chris Frosin always seems to find time for those photography-related-but-not-photography-itself personal projects.

Chris and I have been friends for a few years, and we occasionally jump in a Google Hangout or get together in person to have a chat about new gear announcements, to bounce shoot ideas off each other, or to show off projects we’re doing.  This was how I learned of his plans to make a wooden grip for his Nikon FM2.

Like many of us, Chris quit shooting film when he made the jump to digital, and like a few of us, Chris made his way back to film again, shooting alongside digital, fairly recently.

In early 2014, after coming back home from a trip to Iceland where Chris ventured back into film with a Nikkormat FTn and a Yashica Electro 35 GT, his quest to find a Nikon FM2 began.

It was during this search that he stumbled across a rather odd looking Nikon FM for sale in an online ad.  What was odd, was that it had a wooden “grip”. 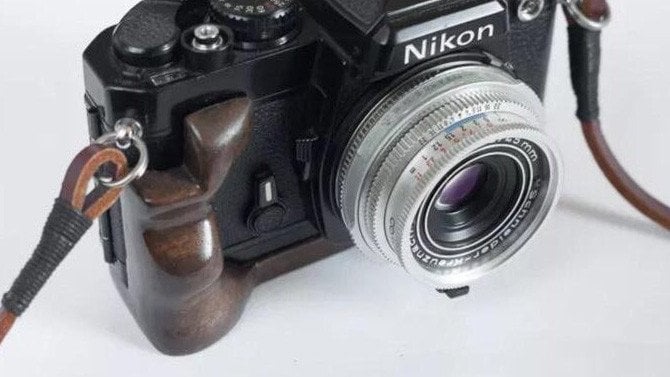 Unfortunately, the price was somewhat steep and it wasn’t the FM2 that he’d had his sights set on, but he liked that grip, or at least the idea of a wooden grip.

Being the “Well, I can do that… only better” sort of guy that Chris is, he decided he’d just make his own.

Having finally picked up an FM2 at the beginning of 2015 and also a cheap, broken, sacrificial Nikon FE body, Chris set to work making his first grip, using the FE as his template. 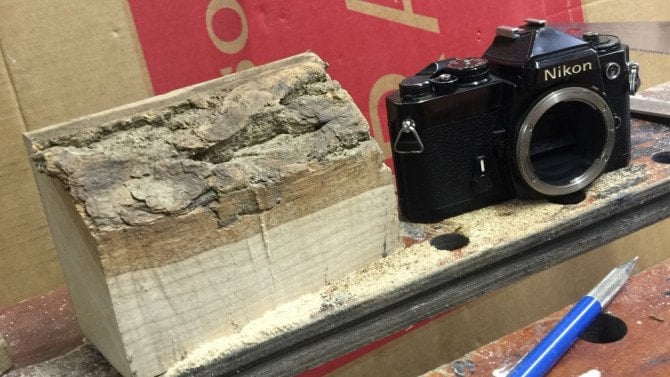 Chris already had an idea of what the final product should looked like before he started, but hadn’t fully figured out how he was going to do it.

While mostly making it up as he went along, but still pulling on experiences from many other woodworking projects from his past, the original grip made it through to completion. 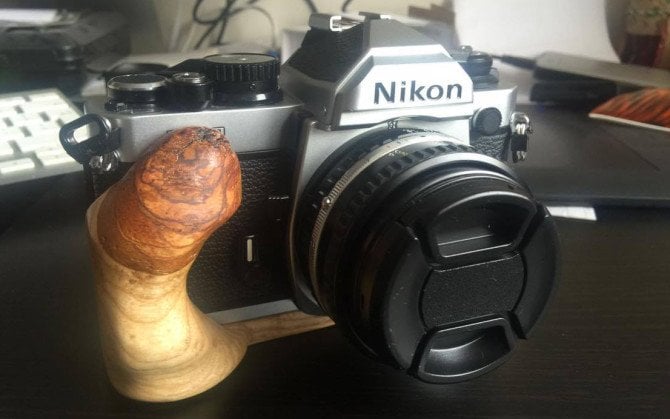 When I asked Chris about what he’d learned from making the first grip, this is what he told DIYP.

If you’ve got a block of wood that’s big enough to fit the whole grip inside, you’ve got to remove a camera’s worth of wood from the inside of the block to create the space where the camera sits and then carve out the grip.

I’ve no idea why I didn’t think of making it out of two pieces in the first place, but it took an awful lot of work to cut out all the recess.

For his second and latest iteration of the grip, Chris switched over to that two piece design creating the base plate and handle separately from pieces of ash.

After cutting out the two pieces, allowing for the release button underneath to be able to rewind the film and for the self timer lever on the front of the body, they are bonded together before being shaped closer to their final appearance. 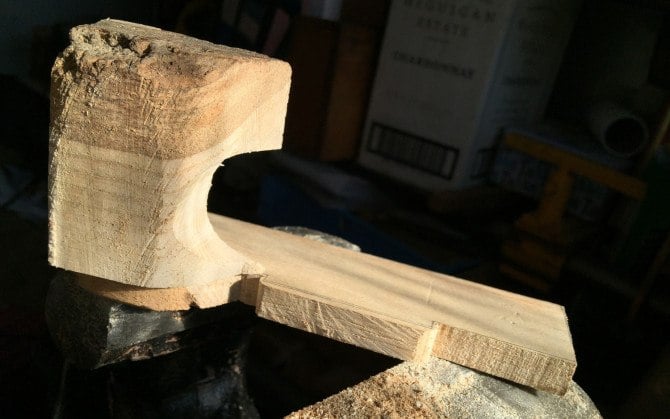 All of this is chiselled by hand, and sanded smooth, a process which takes an incredibly long amount of time. 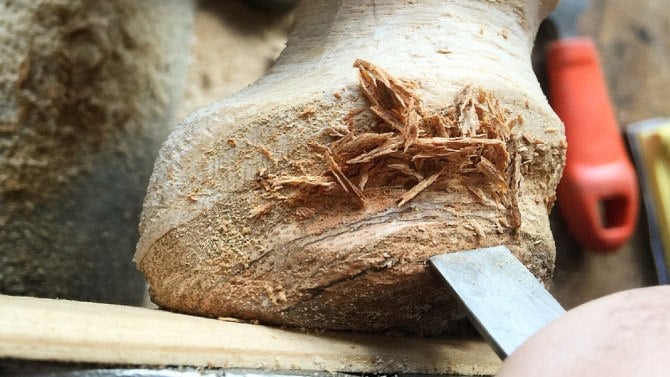 After the basic grip shaping is completed, a small retaining peg is made.  This peg prevents the camera from spinning clockwise, and after being affixed its final form is shaped along with the end of the baseplate. 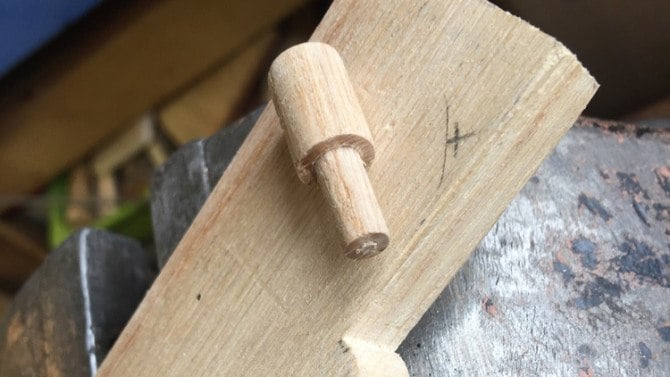 Next, the hole is drilled for the screw which threads into the tripod socket underneath the camera body. 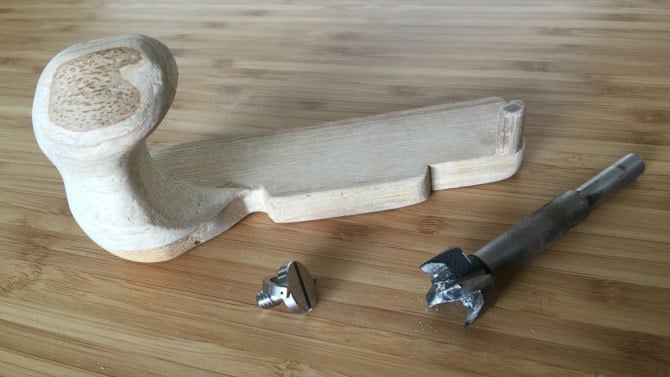 Followed by a final sanding and a dry fit to ensure everything fits smoothly and snugly together. 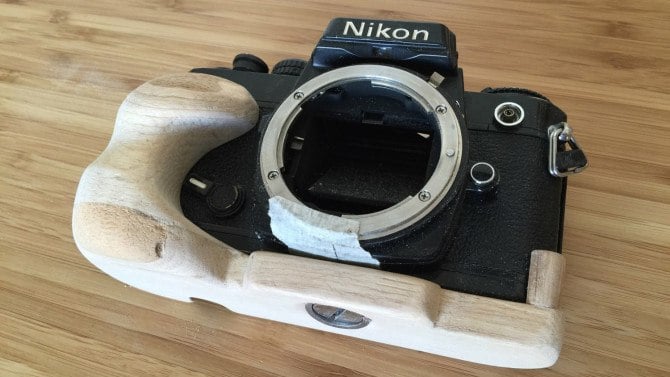 After everything is complete, it’s time for some protection, and out comes the oil. 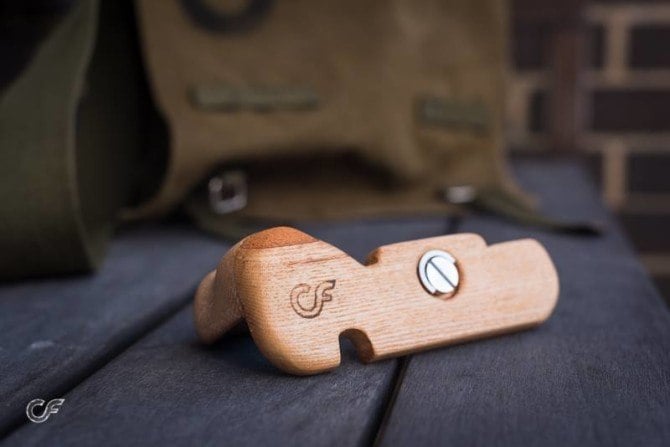 It’s ever so nice to shoot with.  Ergonomically, it’s definitely an improvement. 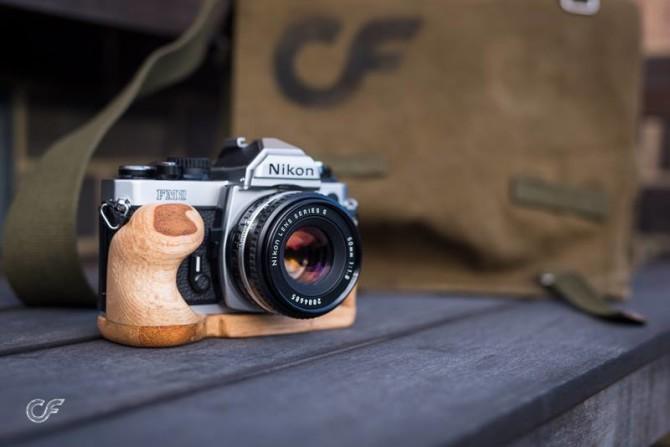 Without the grip, you have to hold these cameras a different way to DSLRs because your fingers are having to hold it tighter, whereas this feels much more comfortable and secure. 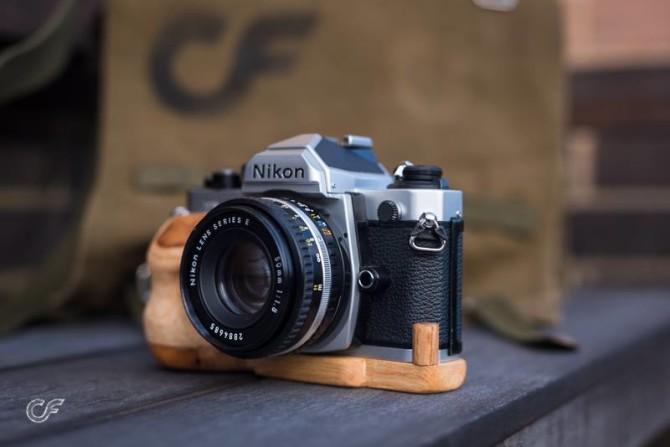 I asked Chris what his future plans were for wooden grips.

Well, I’ve got them up on my website, so you can order one if you want one.  Each one is made as the order comes in, and due to my work schedule it can take a couple of weeks between ordering and delivery, but at the moment I only have a blank for an F type body, so that’s all I’m offering right now.

It’ll fit the FM, FE, etc., but I could definitely go for a Nikkormat one in the future.

Chris is open to the idea of creating grips for other cameras, though.

I just had somebody contact me asking about one for a Pentax ME Super, and I do have a Pentax here, so, maybe.

If somebody wanted a custom grip for a camera I don’t have and can’t get hold of, ideally they’d need to send me the camera, so that I can ensure a perfect fit before it gets sent out.  Obviously this would add to the shipping costs, and turnaround time.

And if it doesn’t take off, is this just going to turn into an excuse to buy more cameras?

Yes.  That’s the main reason why I’m doing it.

I love working with my hands, and the grips are another creative avenue that feels different to photography, or writing, or working on the cars.

When all my cameras have grips, and I want to make another grip, I have a reason to buy another film camera.

GAS is a serious issue affecting many photographers, and Chris is obviously just as prone to this ailment as the rest of us, especially when it comes to film gear.

So, film shooters, what do you think?

Are you eyeing up your SLRs and wondering which may benefit from a little ergonomic enhancement?  Have any of you already made something similar yourself?

Let us know in the comments.

Spoil Your Mamiya With A Wooden Shutter Grip

« Think 10 stops of ND is a lot? How about 17 hour exposures with Lee Filters’ new 15 stop Super Stopper
Nikon issues pre-emptive recalls for both D5 and D500. Please return yours for service, in advance »