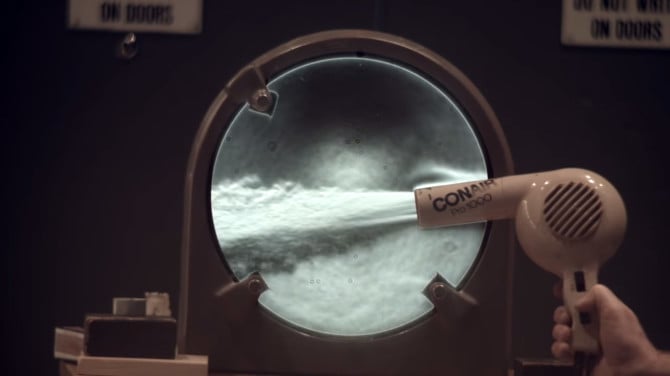 This is pretty awesome. Scientists at Harvard Science Demonstrations put out a video earlier this year that let’s us see air moving with our naked eye. The team assembled some Schlieren optics (which we’ve talked about before) by reflecting a light source from a concave mirror onto a razor blade. The optics are setup in front of a camera to record as they demonstrate the process with a hair dryer, an air filled helium balloon, and a big glass full of sulfur hexafluoride gas. You can get a preview of the setup in the image above, but be sure to watch the video for the full effect, especially if you’re not familiar with Schlieren.

The Harvard Science Demonstrations blog post on the video explains the phenomenon, saying:

“A sphere, by definition, is a surface which is everywhere perpendicular to a radius drawn from its center of curvature. Hence, all light emerging from a given point on the object will be reflected to a corresponding point symmetric about the center of curvature. This produces a real image. Here the object is a point light source and it is imaged onto a razor blade; in particular, it is imaged as close to the edge of the razor blade as possible. A person (or a camera) looks over the razor blade at an object in front of the mirror. If, for any reason, the path of the light rays is perturbed so that the image is shifted upwards, then the light previously blocked by the razor blade reaches the eye (or camera). This results in an illusion of brightness in the region that is the cause of the perturbation.”

The blog post also shares a lot of specific information on how they made their Schlieren optic, so if any of you hardcore DIYers decide to whip one of these bad boys up, be sure to share your experience with us in the comments below!

I’m not sure how this clip slipped past my radar, but I’m glad Redditor, Davey B. brought it to our attention. Dig in!