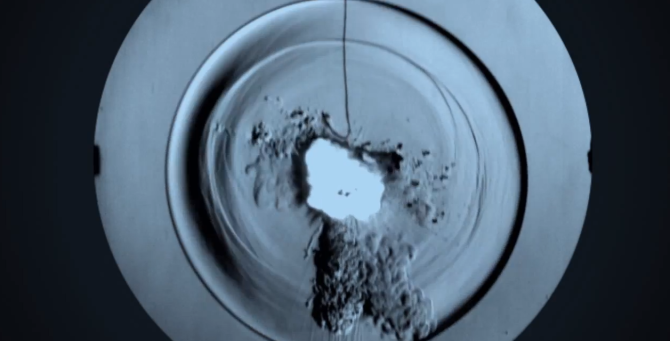 Back in the mid-1800s, August Toepler gave us a way to be able to look at sound. Not synthetically visualize it- but actually be able to look at it. His invention was called Schilieron Flow Visualization; by implementing the complex technique into your camerawork, you’ll actually be able to see waves. Whether it’s the waves made from the snap of your fingers, or the waves from the hiss of an opened Pepsi bottle- you can see the noise they make. And NPR released a video that shows you how its done.

Schilieron Flow Visualization isn’t just for sound. The German physicist invented the technique in order to visualize waves of light, as well. Sound is just as similar to light in that it’s a traveling compression wave.

Oh, and you may want a camera with a high frame rate. That might help. Adam Cole produced this clip for NPR Science, and he came well prepared.

One thing I’d love to see after watching this is how a sound wave would look when traveling through a solid, which is the fastest method of transporter for sound (never fall asleep with your ear against the desk). Check the video out below, and tell us your thoughts! At the end of the day, you don’t have to be a scientist to appreciate something like this.

[Video and information via NPR]