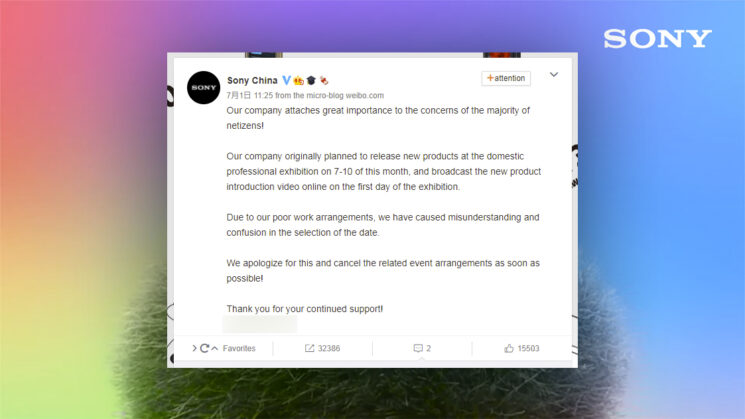 As reported a few days ago, Sony has posted to Weibo suggesting that the postponement of today’s announcement is due to the anniversary is due to the Marco Polo Bridge Incident on July 7th, 1937, that led to the Second Sino-Japanese War, which led to large scale invasions of China.

When Sony initially announced the impending July 7th launch date, users on the Chinese social media site Weibo were quick to respond, and not in a positive way. Sony has now published an apology to Weibo, acknowledging those concerns.

Our company attaches great importance to the concerns of the majority of netizens!

Our company originally planned to release new products at the domestic professional exhibition on 7-10 of this month, and broadcast the new product introduction video online on the first day of the exhibition.

Due to our poor work arrangements, we have caused misunderstanding and confusion in the selection of the date.

We apologize for this and cancel the related event arrangements as soon as possible!

Thank you for your continued support!

Sony was reportedly set to announce a number of new products, including the global launch of the rumoured Sony ZV-E10 APS-C E mount vlogging camera, along with new smartphones in China. The original announcement was also made the date before the Communist Party of China celebrated its 100th anniversary, and the timing did not escape their Chinese audience.

“Because of our inadequate preparation, our choice of date has caused much confusion and discomfort. We wish to express our most sincere apologies and we have immediately cancelled all related events,” the company said. 3/

Sony’s blunder is the latest example of a Japanese company plunging itself into a public relations crisis in the world‘s second-largest economy over what patriotic Chinese consumers consider as war references. 5/

There’s been no word from Sony yet as to when the rescheduled announcement will come or how long the delay can be expected to last.