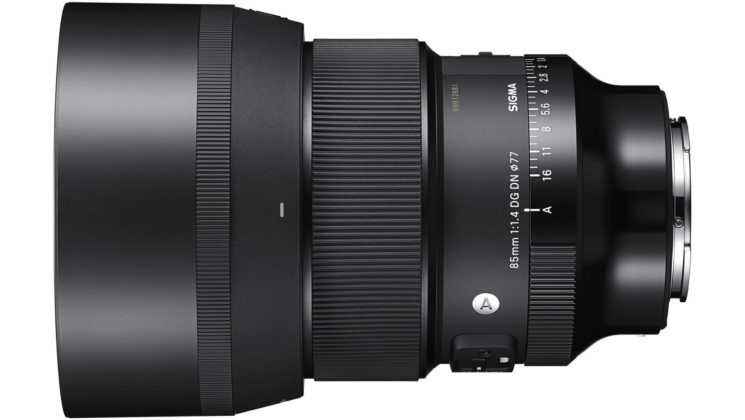 Well, after a few days of leaks and excitement, Sigma’s new 85mm f/1.4 DG DN Art Lens for Sony E and Leica L mount has officially been announced. It might not quite be the “half the size and half the weight” of the DSLR-modified 85mm f/1.4 Art for Sony E, but it’s pretty close!

The new lens isn’t just for Sony E mount, though. It’s for mirrorless systems in general. At the moment, that means it’s also available for the Leica L mount for use with all of the cameras in the Sigma/Panasonic/Leica L mount alliance.

One of the biggest complains when Sigma initially released their 85mm f/1.4 DG HSM Art series lens for Sony E is that it wasn’t really designed for use with mirrorless cameras. It was basically the same 85mm f/1.4 Art everybody else was using, but with a built-in Sigma MC-11. It did the job, and it was good and sharp, but it was bigger than it needed to be, and not quite as quick as it could be.

This new lens solves those, by slimming the size down from 94.7 x 126.2mm to 82.8 x 96.1mm (my guestimate was close, huh?) and the weight from 1130g all the way down to a svelte 625g. As expected, the lens features an entirely new optical design, optimised for mirrorless systems with shorter flange distances.

As you can see from the table above, the specs for the two lenses are largely identical. Same field of view, same minimum focus distance, magnification, neither has stabilisation, but the new lens has more aperture blades (potentially more rounded bokeh?) and utilises a more standard 77mm diameter front filter thread. It’s also a whole lot lighter in the bag.

One other interesting thing to note is that the new lens for Sony E and Leica L mounts features “weather-resistant construction” whereas no such weather sealing claims are made about the original 85mm f/1.4 Art.

The weather sealing alone will be enough to attract some Sony shooters to switch, and cause others to skip by the predecessor entirely for the extra $100 the new lens costs over the old one.

It makes sense that Sigma would release this lens for Sony E and Leica L mounts first. Sony is popular, and the L mount is kinda their own baby right now (along with Panasonic and Leica). But this is a lens designed specifically for mirrorless. So, while they haven’t made any kind of announcements yet, we may expect to see this one come in a native flavour for Nikon Z and Canon RF mounts at some point, too.

Oh, and that unmarked switch? Yup, it was an aperture lock.