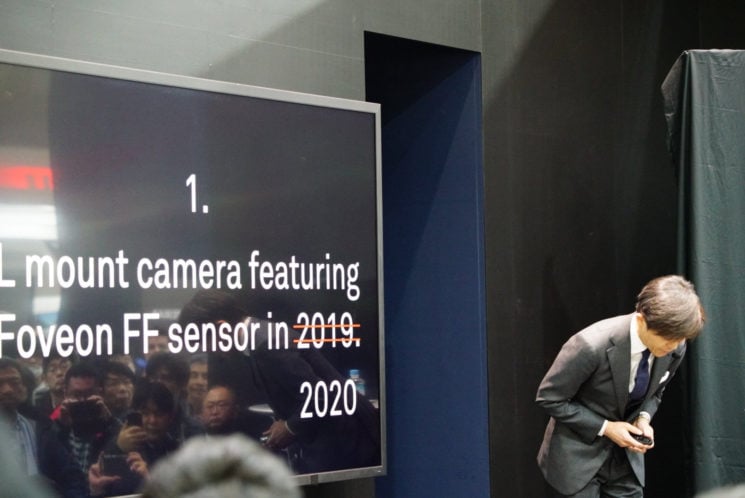 Previously announced at Photokina 2018, the upcoming Full Frame Foveon L-Mount camera from Sigma has been delayed until 2020, according to reports coming out of CP+ 2019. Twitter user nuko009 has posted images from a presentation given by Sigma CEO, Kazuto Yamaki explaining that the camera’s development has been delayed.

Although he did also announce that it will have a 60.9-megapixel Foveon sensor. Sort of. Foveon sensors don’t tend to calculate megapixels in the same way as traditional Bayer sensors. And it’s actually a 20.3×3-megapixel sensor.

【Quick News】 Sigma’s full-size camera development delayed next year. It is strongly demanded that the number of pixels 60.9M or lens special
# cpplus2019

And if that whole “20.3×3-megapixel” thing seems a little confusing, don’t worry. I asked my friend and Sigma UK Ambassador, Paul Monaghan to explain it to me like I was five years old.

Megapixel ratings in cameras is a little misleading as it only tells you how many pixels will be in your image which is different from how much detail an image can actually contain.

One major factor is sensor type, for instance a 20mp Bayer sensor will have 10mp green, 5mp red and 5mp blue. Then, the missing colour information is interpolated (guessed) and filled in to create the 20mp image.

A 20mp X3 Foveon chip, on the other hand, has no color filter and instead has 3x 20mp sensors stacked ontop of each other that capture full color for each pixel. So while the output size is still 20mp like the Bayer, the actual image contains far more detail as no guesswork is done to fill in the blanks.

So, while it will still put out a 20.3-megapixel final image, the colour and detail information is far more accurate, offering the equivalent level of data to a 60.9-megapixel Bayer.

Yamaki also announced a partnership with TSI Semiconductors, based in Roseville, California for development and production of the new full frame Foveon sensor. It’s a shame it’s going to take a year longer than originally anticipated for Sigma to bring a full frame Foveon camera to market. But hopefully, this means they’re putting more time into developing things like ISO performance and speed.